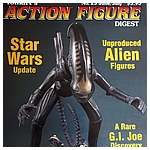 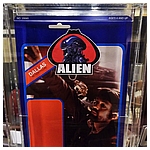 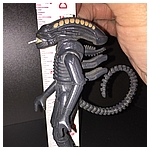 Special Report: A Tale of a Tail

Back in the 1990's, toy collectors loved to read Tomart's Action Figure Digest. All of the amazing toys, and in some cases, prototypes, were printed on its pages. Prototypes that were one of a kind, and only seen by reading the articles within the magazine. Issue #23, published in June/July 1994, stands out to me. On the cover is an 18-inch 1979 Kenner Alien figure looking down on a pair of 3.75-inch prototypes, the Xenomorph (Alien) and Kane. Both of these prototypes are hand-painted hardcopies. This was the first time these 3.75-inch prototypes had been publicly shown. Prior to this, only a small group of collectors and some former Kenner employees were aware that these 3.75-inch prototypes even existed. This was because the 3.75-inch 1979 Alien line was cancelled just before being shown at that year's International Toy Fair in New York.

Rumors ran among collectors of this mysterious line, but this was the first public evidence that these prototypes existed, and that the 3.75-inch 1979 Alien was almost produced for retail. Personally, I was drawn to the look of the Alien figure along with its incredible details. The sculpt was very clever, with a lever on top of the head that allowed the teeth to move in and out of the mouth. I also was intrigued by the tail that turned upward. I had discovered a collectors passion for that Alien prototype and wanted to learn more about it. Little did I know that I would not only own it one day, but that I would also learn some very interesting details about the history of this piece.

In 2016, I became the owner of the 3.75-inch Alien prototype on the Tomarts cover, along with other unproduced Alien prototypes and a Dallas mockup card for the 3.75-inch figure. I was researching the mockup card and came into contact with its original designer, Cheryl Welch. Cheryl worked for a Chicago-based design firm in the 70's and 80's, that was contracted by Kenner to create card art for the New York City Toy Fair. Cheryl described to me the collaborative design process between Kenner and her firm, which involved Kenner sending prototypes to them to be used in photos for the front and back of the blister cards. It was during this process that she revealed some intriguing information regarding that 3.75-inch Alien prototype on Tomart's #23 cover.

According to Cheryl, Kenner sent two of every prototype to her firm. One was to be placed on the card they created that would then be sent to Toy Fair for display, and the other was reserved as a backup, in case the first was damaged. The Alien selected as the master" piece (which is the prototype shown on Tomarts cover) was photographed, and then intended to be placed in a plastic bubble on a mockup card. However, during the photo shoot, the Alien fell over and the tail broke off. The broken Alien was placed aside and the second backup Alien was then used as the master. The backup Alien was placed on its mockup card and sent to New York City Toy Fair, along with four other characters chosen for the 3.75-inch Alien line, Kane, Ripley, Ash, and Dallas. Shortly after being shipped, Kenner informed Cheryl's firm that the 3.75-inch Alien line would be cancelled, due to the R-rating of the movie and negative reception from parents to the 18-inch Alien figure already on store shelves.

After the line cancellation, Cheryl held onto that first master Alien prototype with the broken tail. In the early 1980s, her then husband Ray, ended up taking the piece to a Chicago Comic Con and traded it, along with an unrelated movie poster, for a collectible lunchbox. Shortly after, the new owner contacted Cheryl for authentication of this piece as he was selling it in a trade magazine called Toy Collector. Cheryl reviewed the trade magazine photos and was confident it was the same piece she had worked with previously because of the paint on the head, the lever for the teeth, and the detached tail that was lying next to it in the sale photos.

Thomas Tumbusch, owner of Tomart's Action Figure Digest, saw those same photos in the Toy Collector trade magazine and soon after became the new owner of the broken-tail Alien prototype, along with another 3.75-inch 1979 hardcopy from the Kenner Alien unproduced line, Kane. Several years later in 1994, he featured these acquisitions on the cover of Tomart's issue #23. For the photo, Tumbush had reattached the Alien tail with glue so that it curled upward. This left many people believing that was the way it was supposed to appear. In reality, the tail was reattached in the wrong orientation; it should have been curling down and under the Alien, rather than upward. Tumbush made an honest mistake; very few people had ever seen what those 1979 Kenner prototypes - having never made it to production - looked like. But this was a mistake that made myself and many other collectors, for many years, believe that Kenner had purposely designed the figure to look that way.

It wasn't until I talked to Cheryl, showing her photos of my Alien prototype, her recognizing it, and then telling me the story of the tail, that I was able to piece the history together. I immediately pulled the prototype from my cabinet and instantly saw where the tail was reattached to the body. I also talked to my good friend and fellow collector Tracey Hamilton, who I acquired this prototype from, and he confirmed that he had obtained it directly from Thomas Tumbusch. In the end, what appeared like a design decision by Kenner, ended up being an interesting mistake by Tomart's that goes down in history, for the unproduced 3.75-inch 1979 Kenner Alien line.

A collector friend recently visited my home to view my Alien prototypes. He remembered the Tomart's cover for issue #23. I proceeded to tell him the story of the Alien tail going the wrong direction. He was floored, because he too, always thought Kenner just did it that way. He asked if I was going to remove the tail, and reattach it to the Alien in its correct orientation, to which I replied, It is part of history now, and to reattach it any differently would erase that history. It will stay this way, as everyone remembers it, from the Tomart's cover it was photographed on.

Stay tuned for the next article in this series that will uncover the mystery of what became of the second master Alien prototype!

****
The author extends a special thank you to Cheryl Welch for sharing the story of this Alien prototype and for helping to fill in the gaps in the timeline. Also, a thank you to Tracey Hamilton, a fellow Alien enthusiast, collector and friend who helped in the acquisition of this awesome prototype. Lastly, a thank you to my wife Karen for help editing this article.