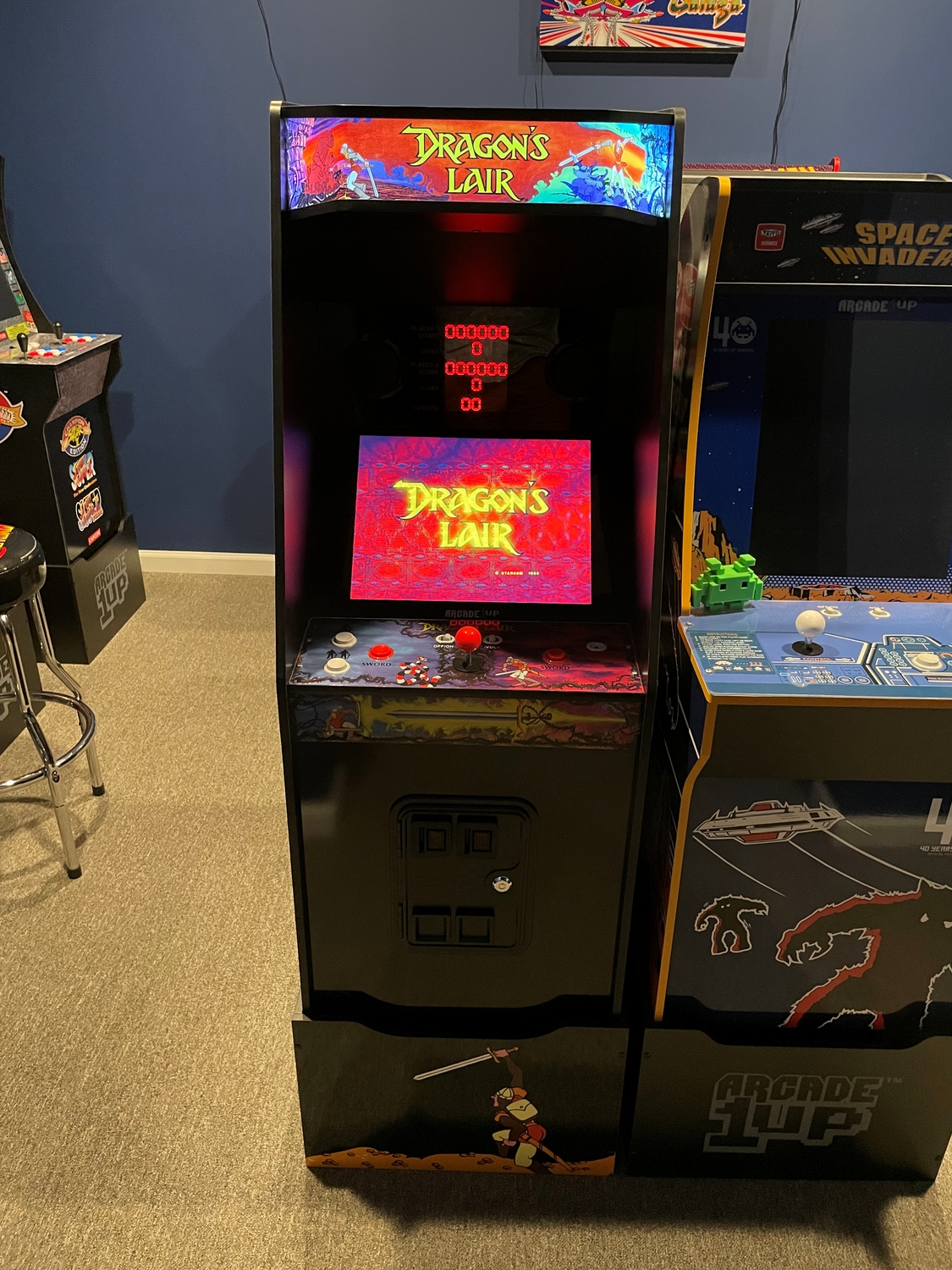 Arcade1Up continues to slay it, pun intended, with it's fourth generation models featuring the now standard light-up marquees, graphic risers, and molded coin doors. While the price is still much higher than we are used to, those who purchased this unit early did get a $50 discount and free shipping, so it took the sting out a little. Still, the older base models of $350 to $400, even before inflation and a chip shortage, didn't include the custom riser, light-up marquee, and molded door, so you are at least getting some more value out of it. In addition, this cabinet has several other features elevating it to deluxe status in our view compared to the more basic titles. 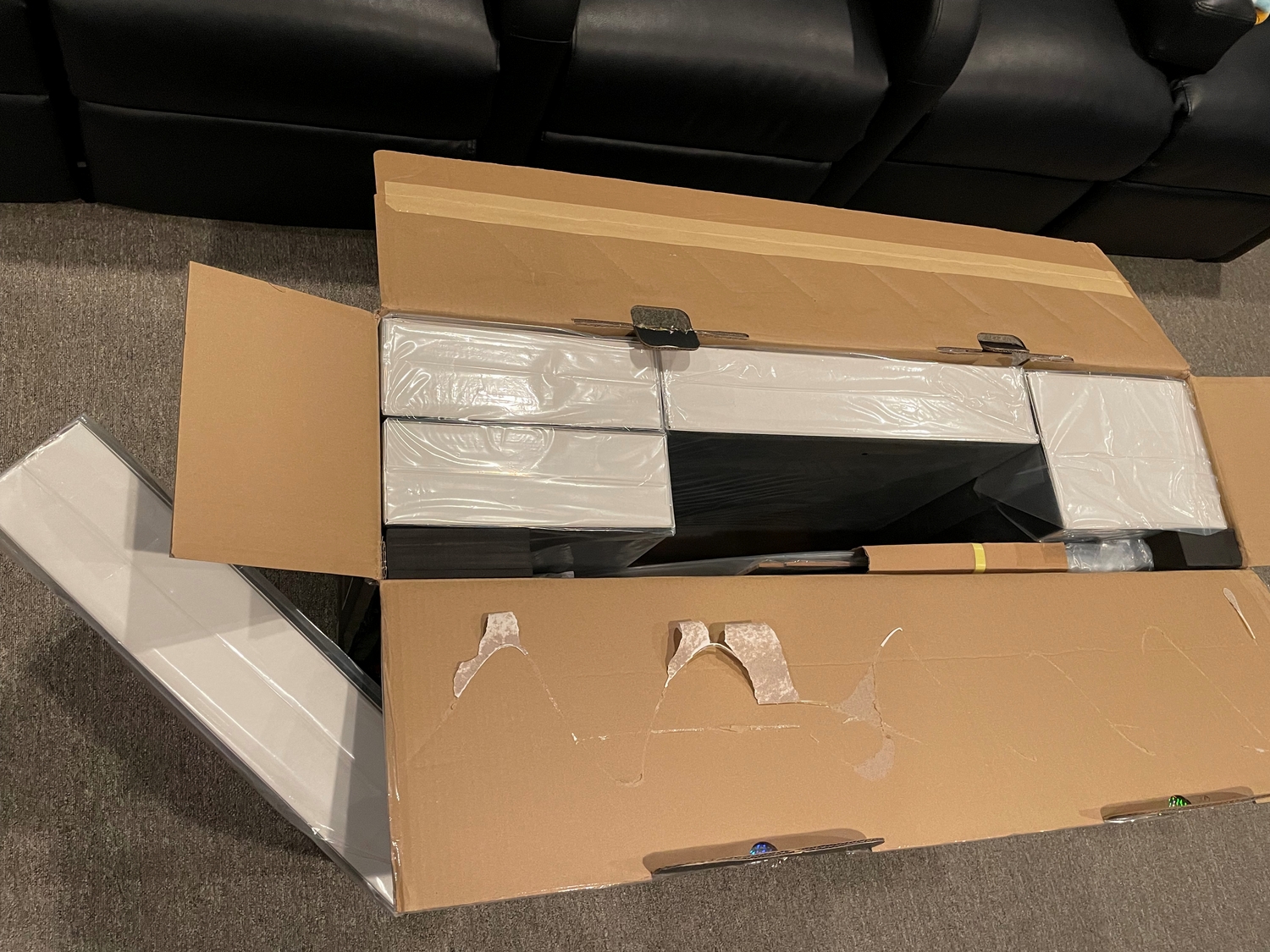 Arcade1Up really stepped up their game in the packaging department, as we remember generation one units that were received with dented panels, styrofoam ending up behind the monitor, and other problems. They corrected that in future generations with additional filler in the box and wrapping the monitor in plastic, but they took their game to a whole new level with the Dragon's Lair release. We now have foam edging in the box, which doesn't break like styrofoam and has some shock absorption properties. Not only are individual components individually bagged, they now all come in their own boxes. Perfectly secured while shipping and each box has a convenient symbol on it to denote electronics, controls, monitor, or structural parts. It made it easier to find the pieces during assembly and this is the first unit we received without cosmetic damage of any kind. Even the boxes holding the parts were in mint condition. 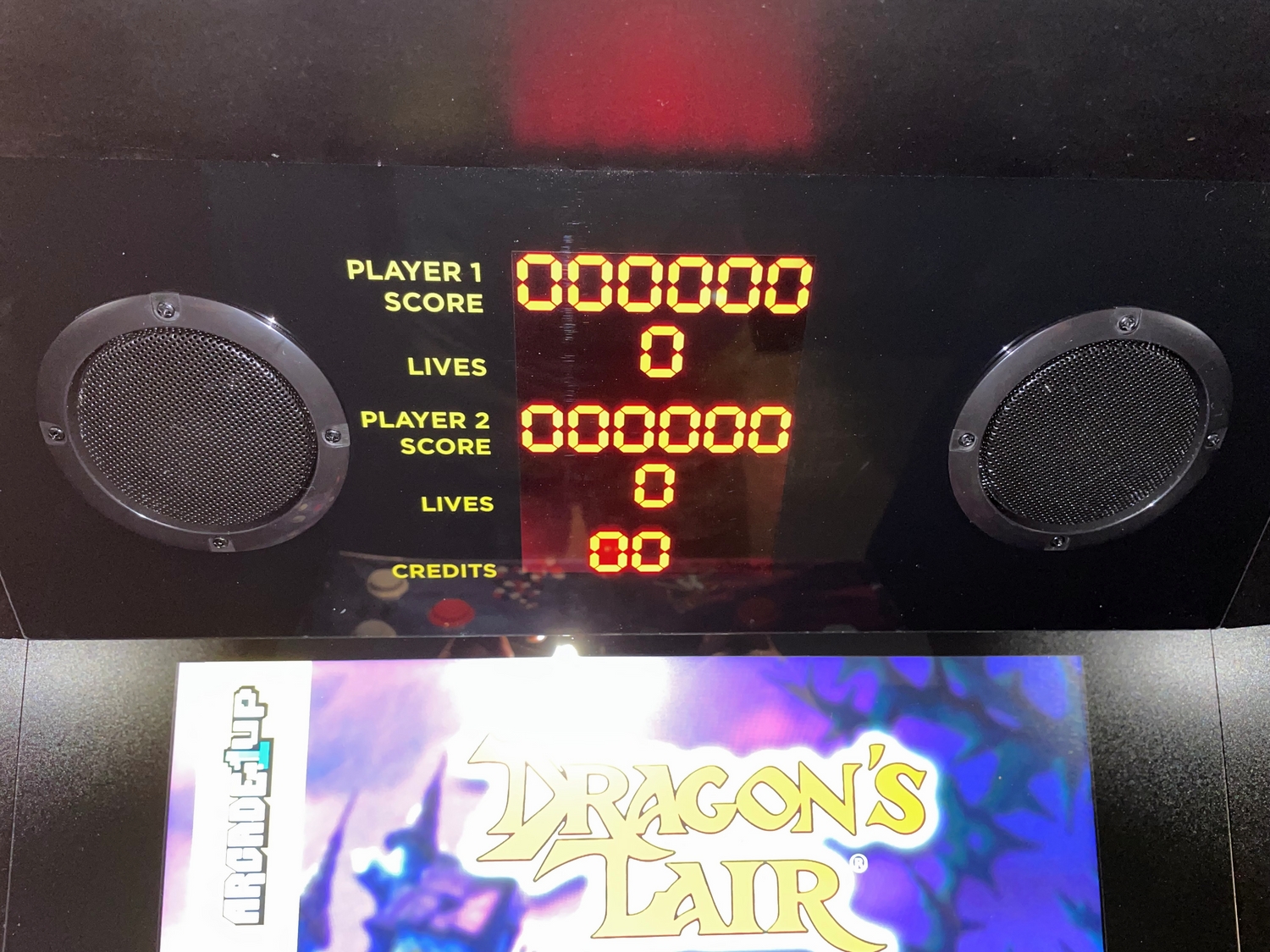 The unit itself stands out from all the other standard Arcade1Up cabinets. First, it is a little taller, as they added an extension to the side panels, so it stands about three to four inches over previous models. One thing fans were asking for was bigger units, and ideally without more price, so this was a welcome addition. In keeping with the original design, the unit features a wonderful LED score and life tracker, so you can see the points acquired for each feat. The cabinet also features a graphic on the front of the cabinet below the control panel, which seems like a first as most cabinets only featured artwork on the control panel, sides, and on the front of the riser. Typically this would have been an after market purchase and is a really nice inclusion here. Also we have to mention the amazing wrap around light-up marquee really capturing the spirit of the original unit. 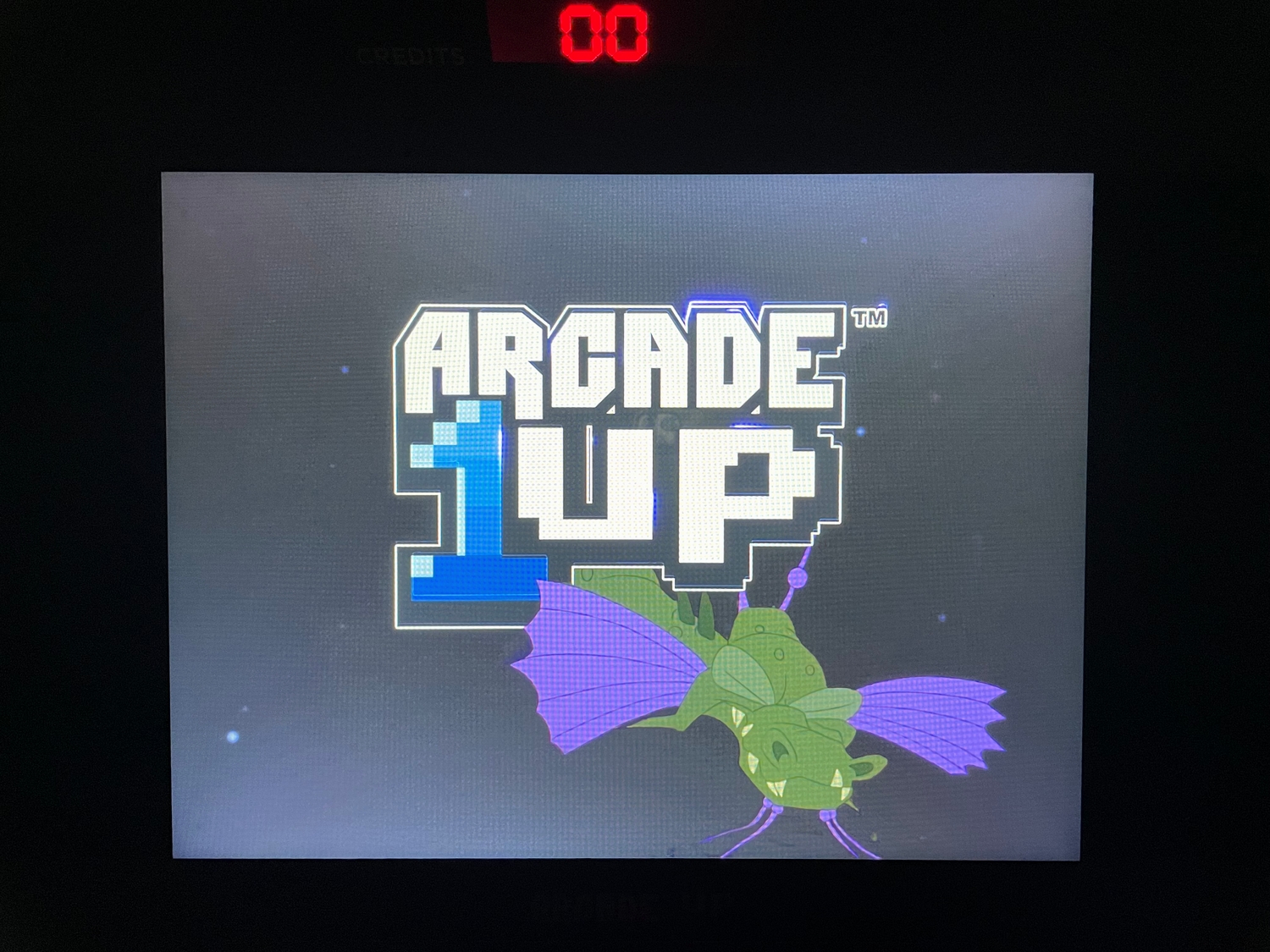 We've noticed increasingly improved menu screen for each new model but this was the first time we noticed a custom boot up screen featuring Singe the Dragon! Each game also has the equivalent of a debug menu where you can customize the number of lives, difficulty, or gameplay progression. This gives players the ability to experience a gameplay similar to the arcade or a slightly less frustrating unlimited play option. 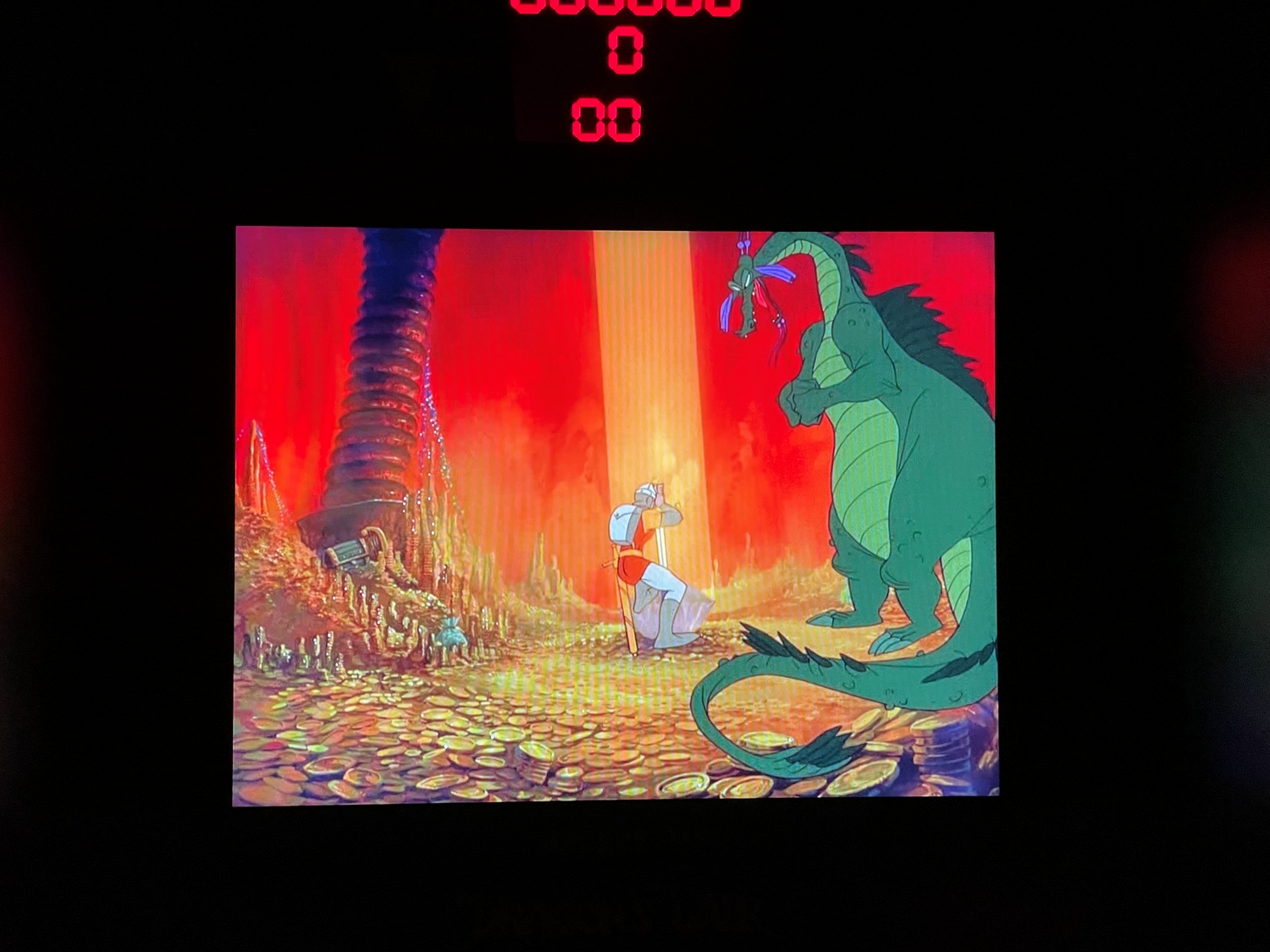 Dragon's Lair gameplay is just as epic and frustrating as we remember. It still has that beautiful arcade feel of suspense and consequence. The screens look beautiful and we found no issues with stalling, glitching, or control unresponsiveness. It has been a while since we played this in the arcade but on the home versions we played, it was a linear progression of rooms, whereas in this unit the rooms are randomly spawned, so each playthrough is different. That might have been intentional in the arcade version to avoid letting the player become too familiar with the patterns and room orders. 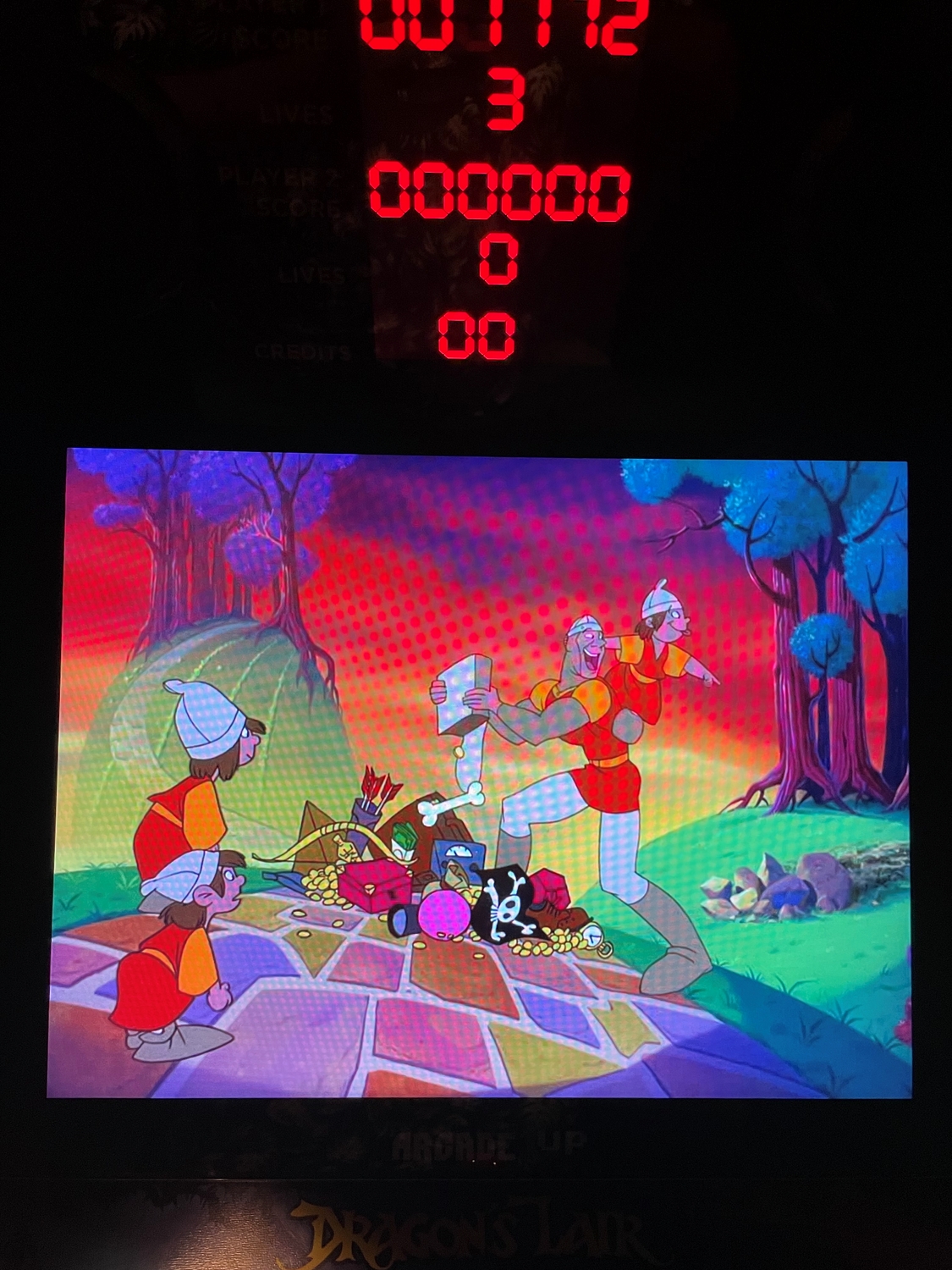 When I played Dragon's Lair 2 in the arcade all those years ago, I never managed to even get out of the first level. Extremely difficult and unforgiving, this game is as frustrating as I remember. Not only is there a minor margin of era, sometimes a sequence can require quick response multiple times in a row. On top of that, the sequences have no breaks. While Dragon's Lair featured mini vignettes for each room, these are three to four minute long sequences with dozens of responses required, and they can mirror themselves upon death requiring the opposite of moves conducted in sequence. Advanced players can complete the game in about 12 minutes, we took about three hours of trial and error, even with a roadmap of the game. The timing is not the same for each move and even a yellow flash does not mean it's the right moment to move. Serious trial and error, and a lot of patience will get you through this. Fortunately you can get unlimited lives, unfortunately you need to start each level over from the beginning each time and recollect the treasure to assure the end game is initiated. It can be rewarding just from the journey itself, however we would have appreciated a pause or save option as this can be a nightmare to have to restart from the beginning. 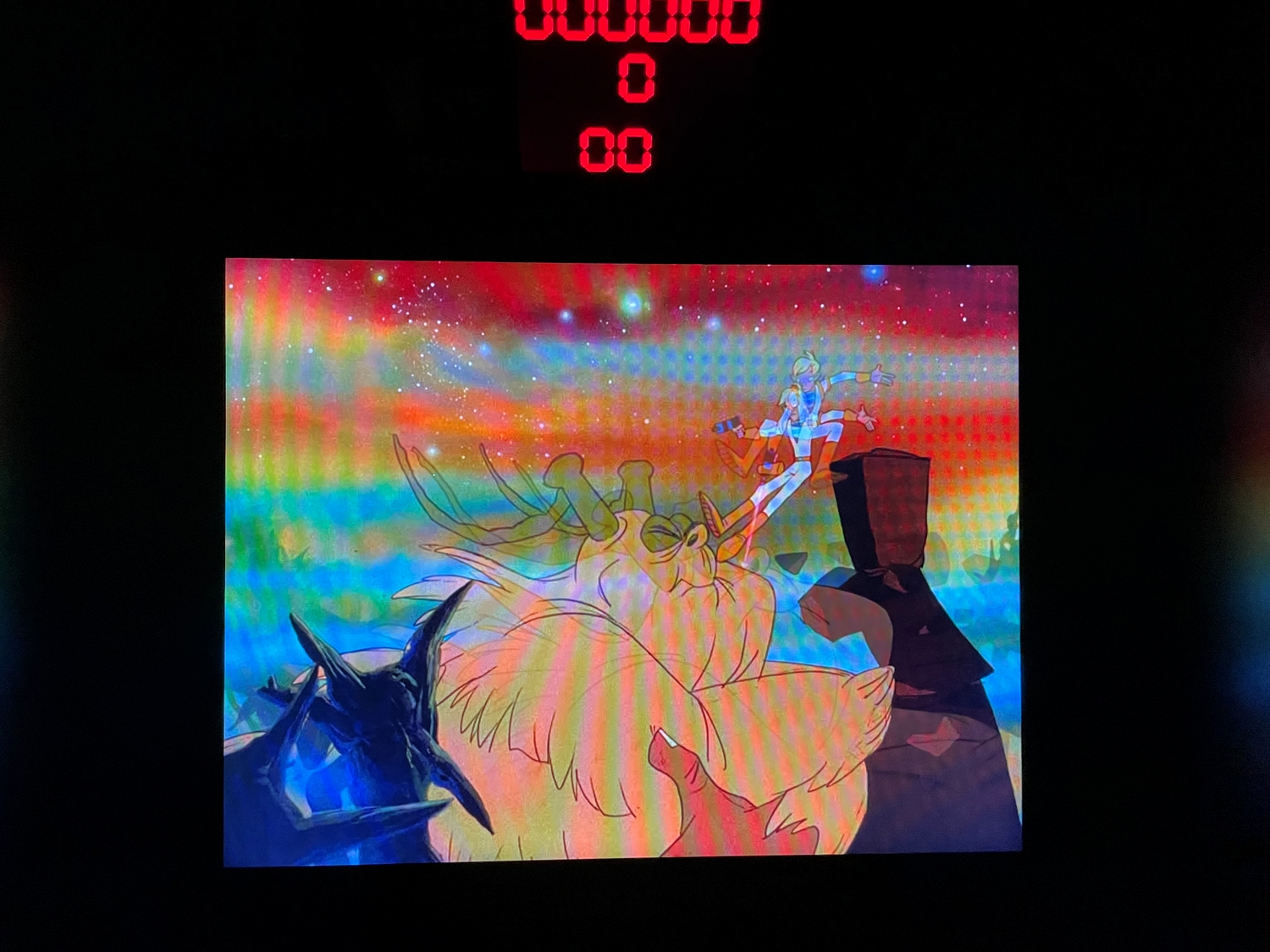 We never played Space Ace in the arcade, so this was an entirely new experience for us. It has an interesting story and is the fastest of the three. Players who fail a sequence are automatically moved on to the next sequence, until the final stage where players are required to perform the moves to finish the game. This is a good game for beginners, getting you familiar with identifying the timing and move set. It's an easy play through and worth getting better at the sequences to see a smooth cinematic experience. 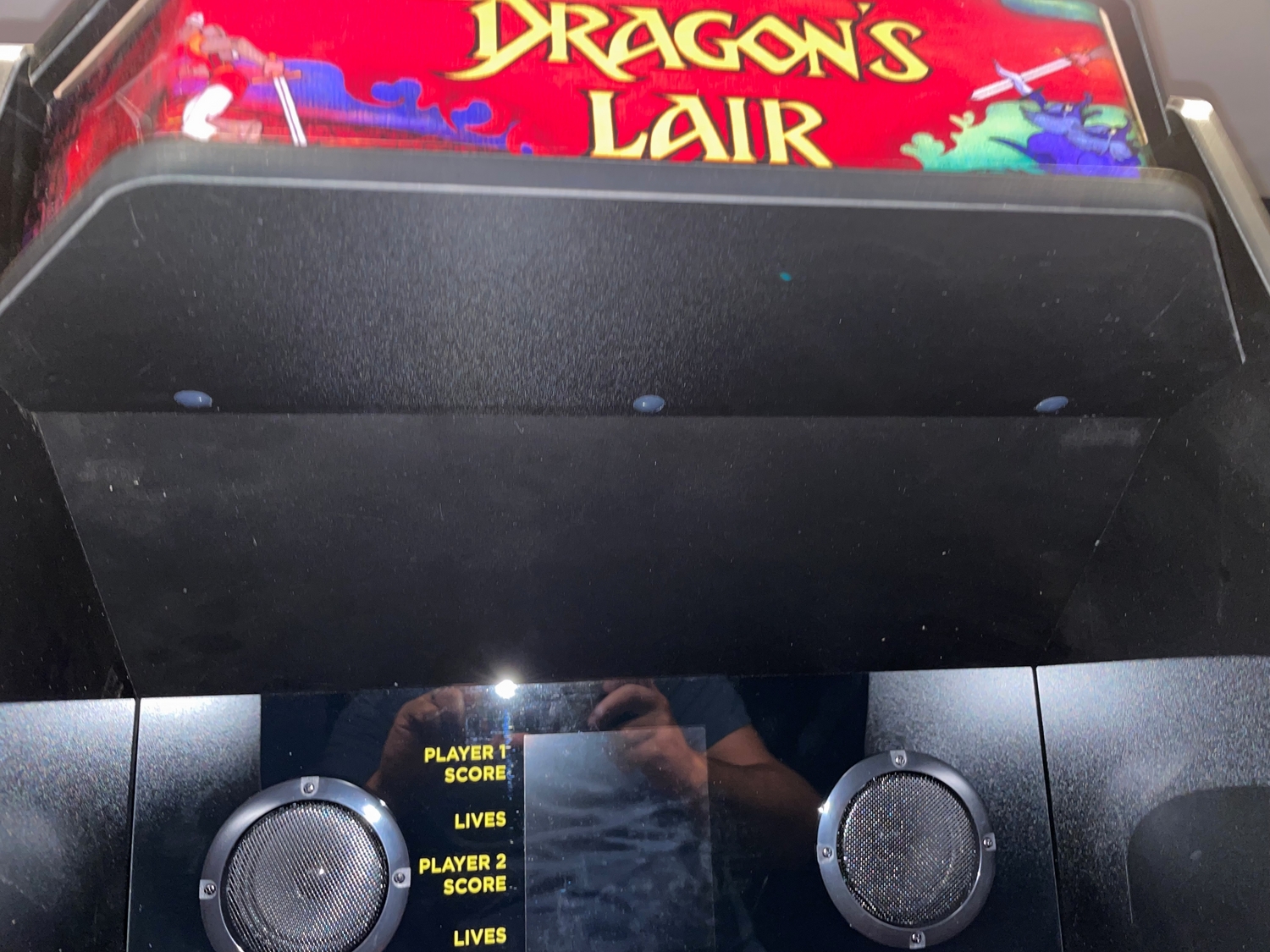 While Arcade1Up has made huge strides with its fourth generation units including now standard light-up marquees, graphical risers, molded coin doors, and expanded graphics, there is still one area for improvement since the original models that they have not addressed. That of course is the industrial look of the exposed screws which both break up the artwork on the sides of the cabinet and give it an unfinished look, ruining the aesthetic. This time around there are exposed screws on the underside of the canopy, which can be a distraction with the light coming off the game in a darker room. The solution, as you can see above, of course is some basic screw caps you can acquire at a hardware store and a little bit of poster tac you can get anywhere to hold them in place. We wish Arcade1Up would include the screw covers, and especially colored ones to match the paint tones on the sides of the cabinet for the more colorful units. It's a cost effective solution and really helps give the unit a polished look and they can be easily removed if you ever need to disassemble it. 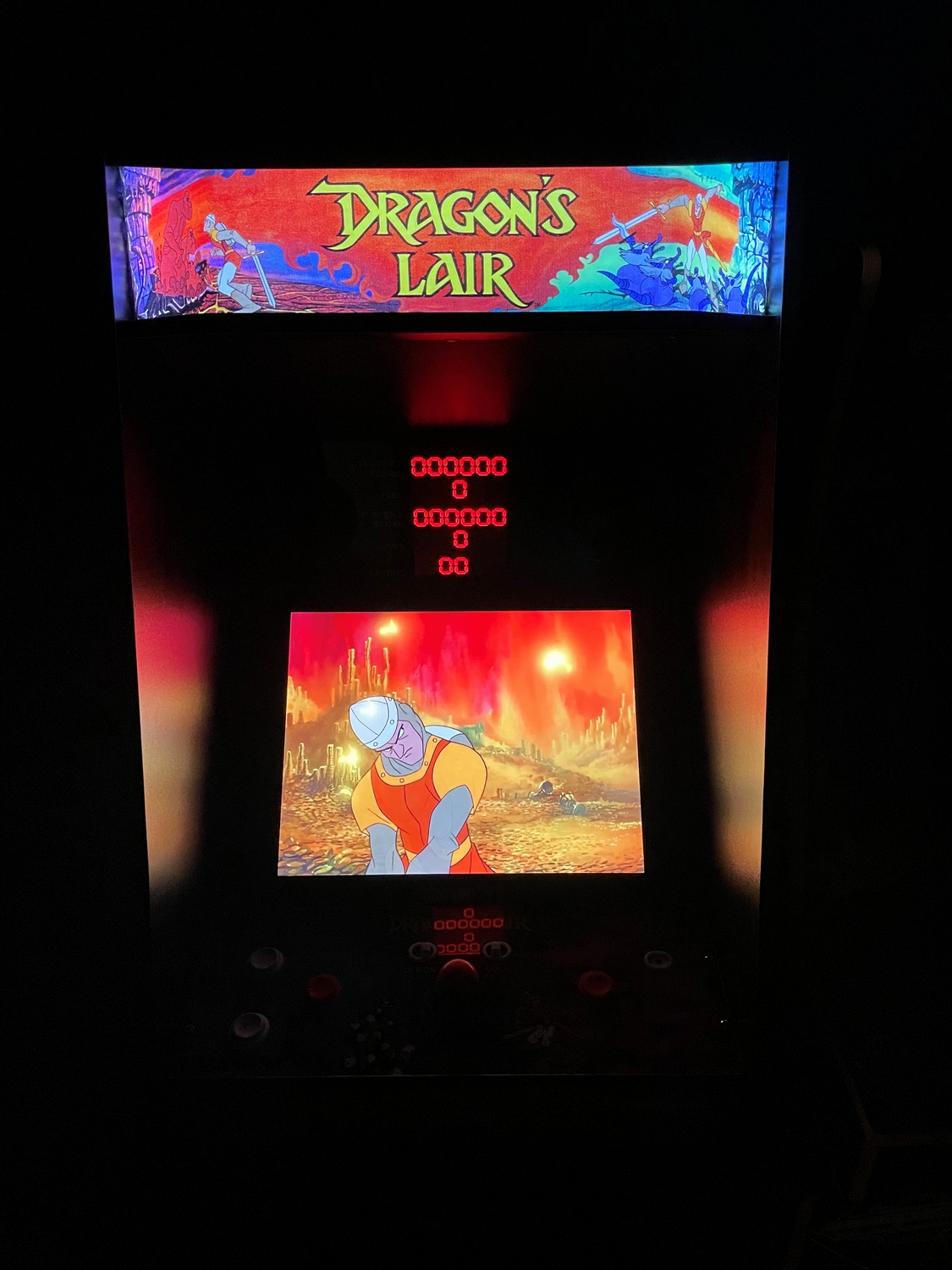 This is clearly one of our favorites in the Arcade1Up line so far. A solid staple of the '80's and a true quarter eating machine. As these games have not been offered in a while and the experience is best had in arcade form, this is the perfect way to capture that classic experience at home. Adults and children will be excited to experience this adventure again or for the first time. Originally, Arcade1Up introduced variant Space Ace artwork for the cabinet when initially revealed, however currently you can only buy the Dragon's Lair version, and only from Arcade1Up. If interested you can still get it from their site, we recommend you don't wait long as once word spreads this thing will easily sell out as we approach the holidays. You can click here to order yours!