Posted by: Nick on May 24, 2022 at 07:19 PM CST
Based on their appearance in the Peter Jackson trilogy, Diamond Select Toys faithfully captures heroes and villains from the series with some of their most iconic accessories. Thanks to Diamond Select Toys for providing us with review samples for this segment.

SEE THE WAVE ONE GALLERY HERE. 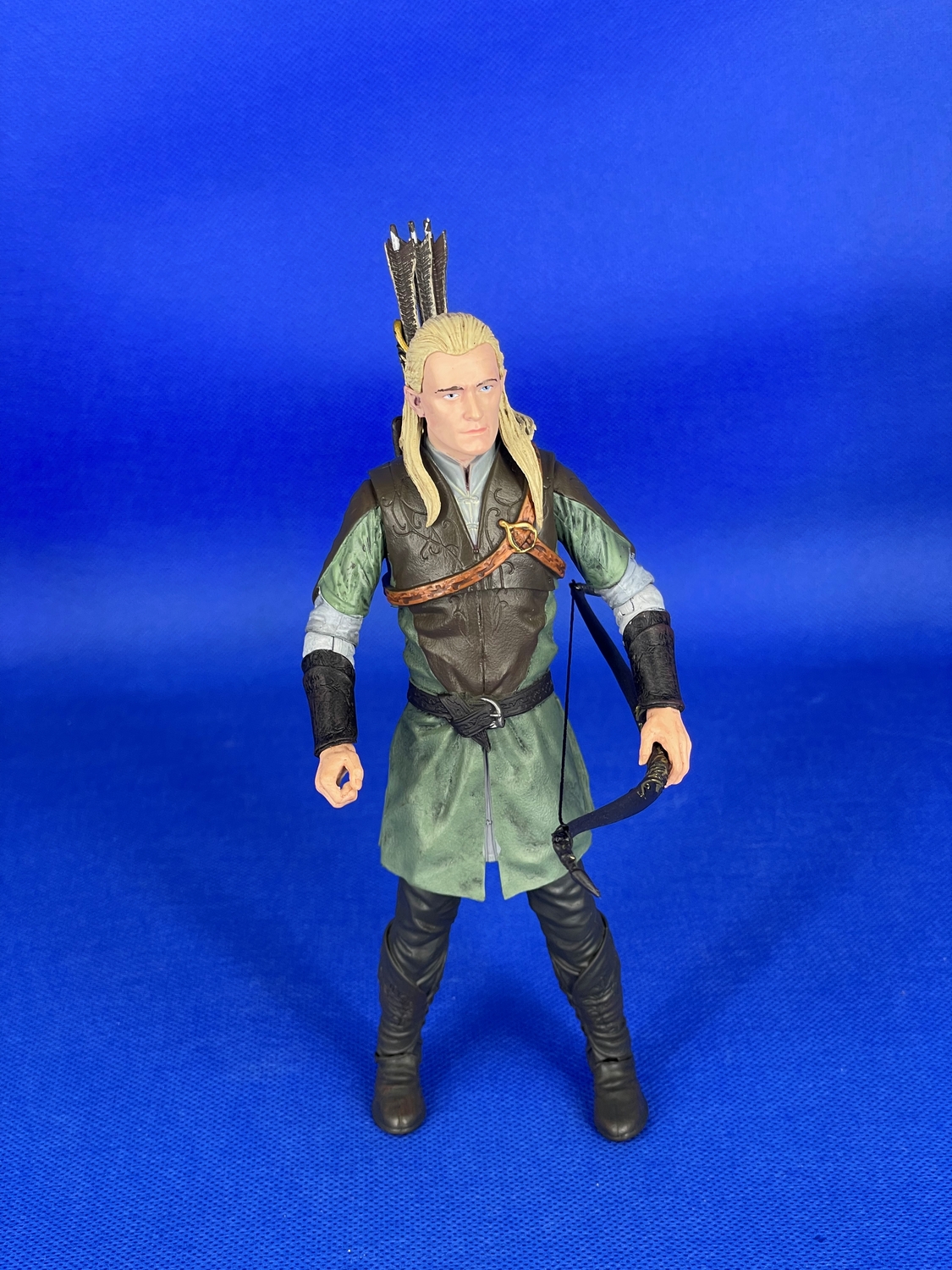 Legolas, as expected, comes with his bow and arrows. The quiver works great and can easily hold the arrows, plus more. Also included are Sauron's arm and leg for the build-a-figure. The bow features real string, which was a nice touch vice going with a plastic string. You'll notice he has holsters for his dual daggers but they are missing from the figure. If you want to complete the figure you will have to pick up the Deluxe Gollum figure now available which includes accessories for Legolas, Gimli, and Aragorn. The face is a nice likeness of Orlando Bloom. There are also nice little detailing touches and texturing on his clothing and bow, that help the figure pop a little. 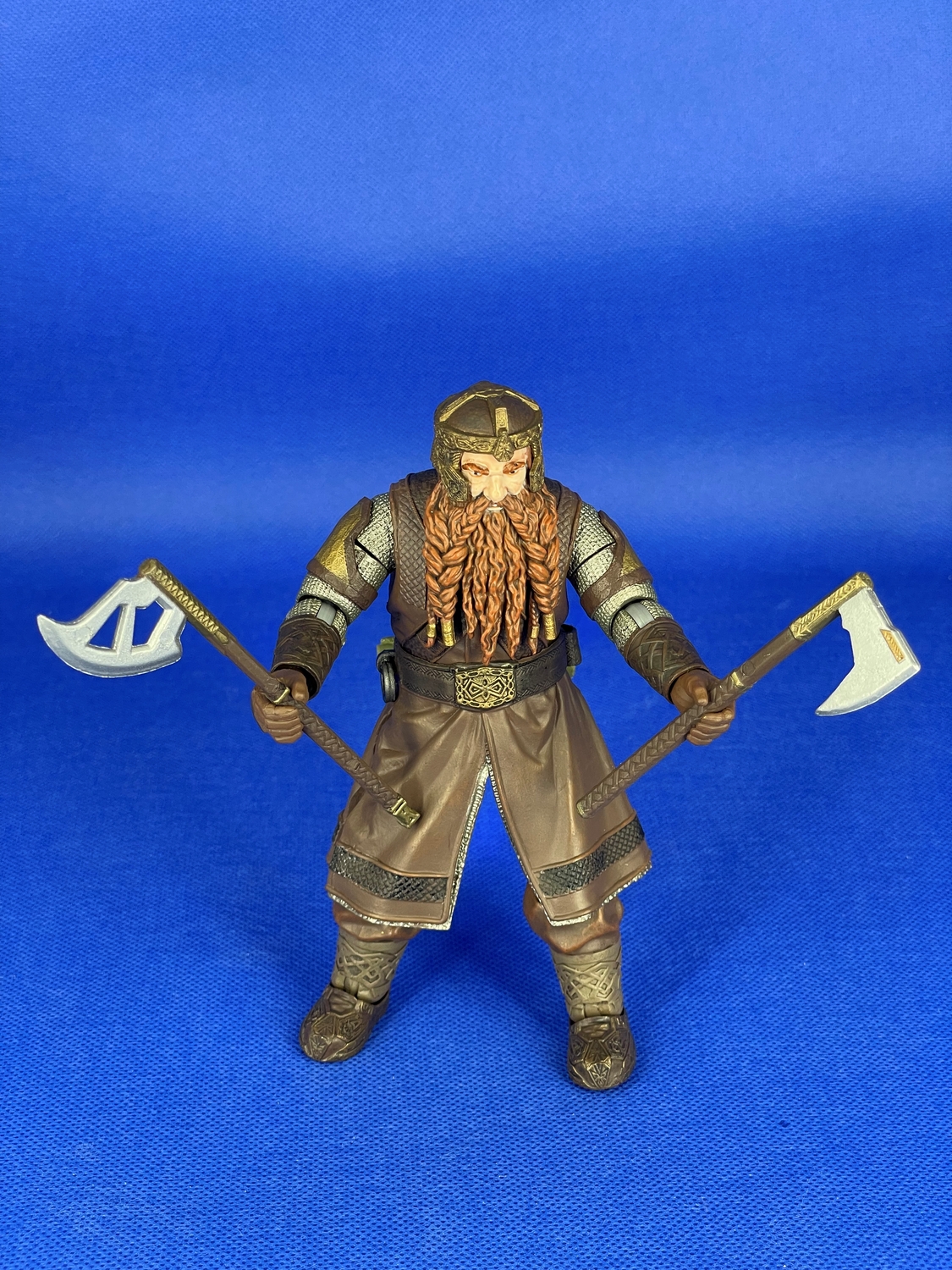 Gimli includes a plethora of axes in addition to alternate hands for holding weapons, or strangling annoying elves. Also included is Sauron's head. Gimli's figure is a solid build, sturdy just like the character himself. This also plays to his disadvantage as he can be tricky to balance and lacks a good range of motion due to his armor. There are tons of detail in his helmet, clothing, armor, and beard that make him stand out in the line. There is even detail on the wrapping on the weapons. You'll notice Gimli is also missing his throwing axe, which as we mentioned previously, is included with the Deluxe Gollum figure. If we had to pice a favorite out of this wave it would clearly be Gimli. 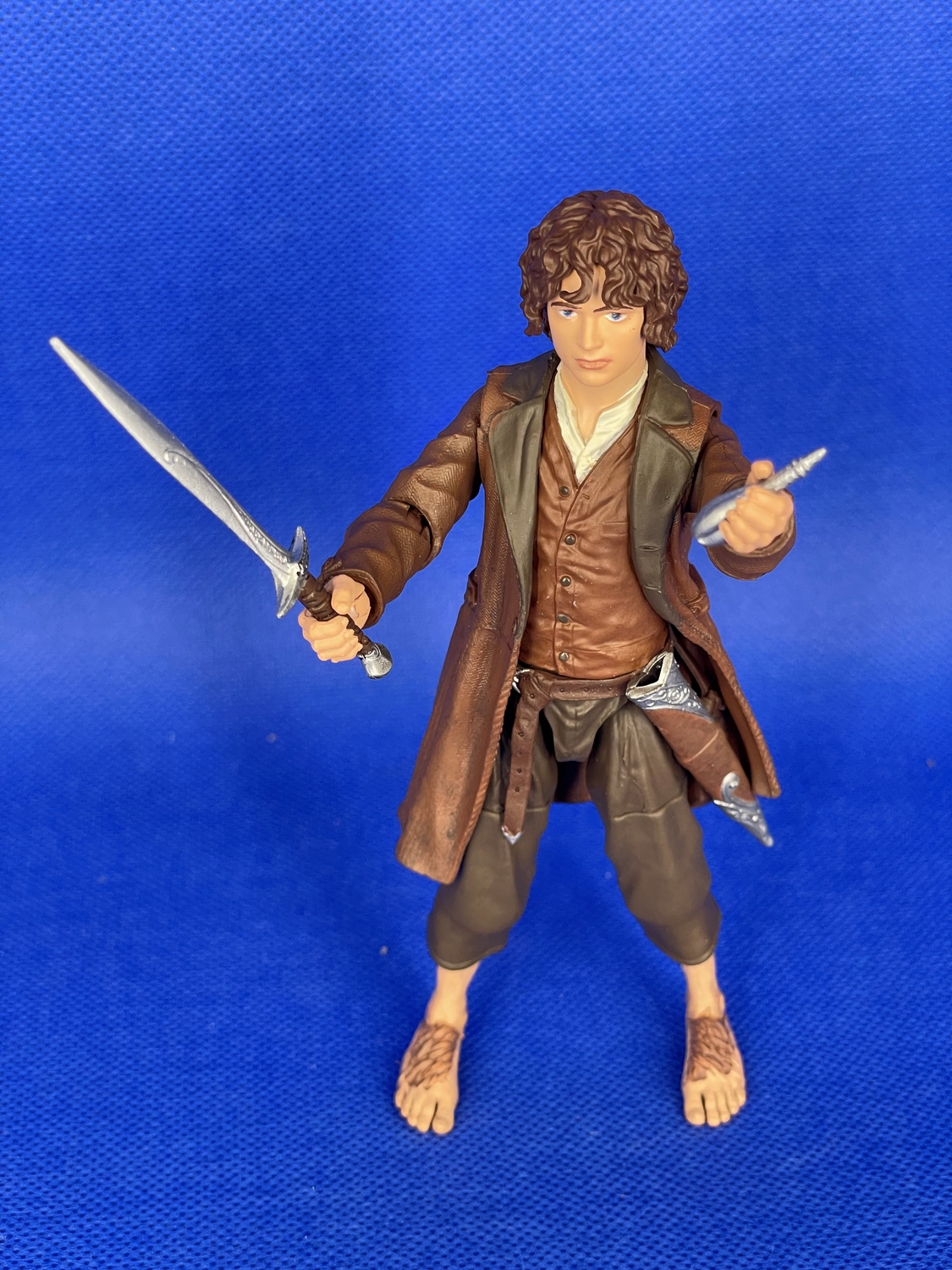 Frodo, featuring a decent likeness of a young Elijah Wood, comes with Sauron's body, Sting, and the light of Earendil. The sword fits neatly in the holster and with a little maneuvering you can fit the light in his hand to help guide his well. There is great attention to detail on this figure to everything including the sword, jacket, buckle, shirt, hair, and more all the way down to his furry feet. While the jacket is beautifully detailed it would have been nicer to have been cloth so as to increase his range of motion. Frodo is the clear winner in this wave, as he is just a gorgeous figure. 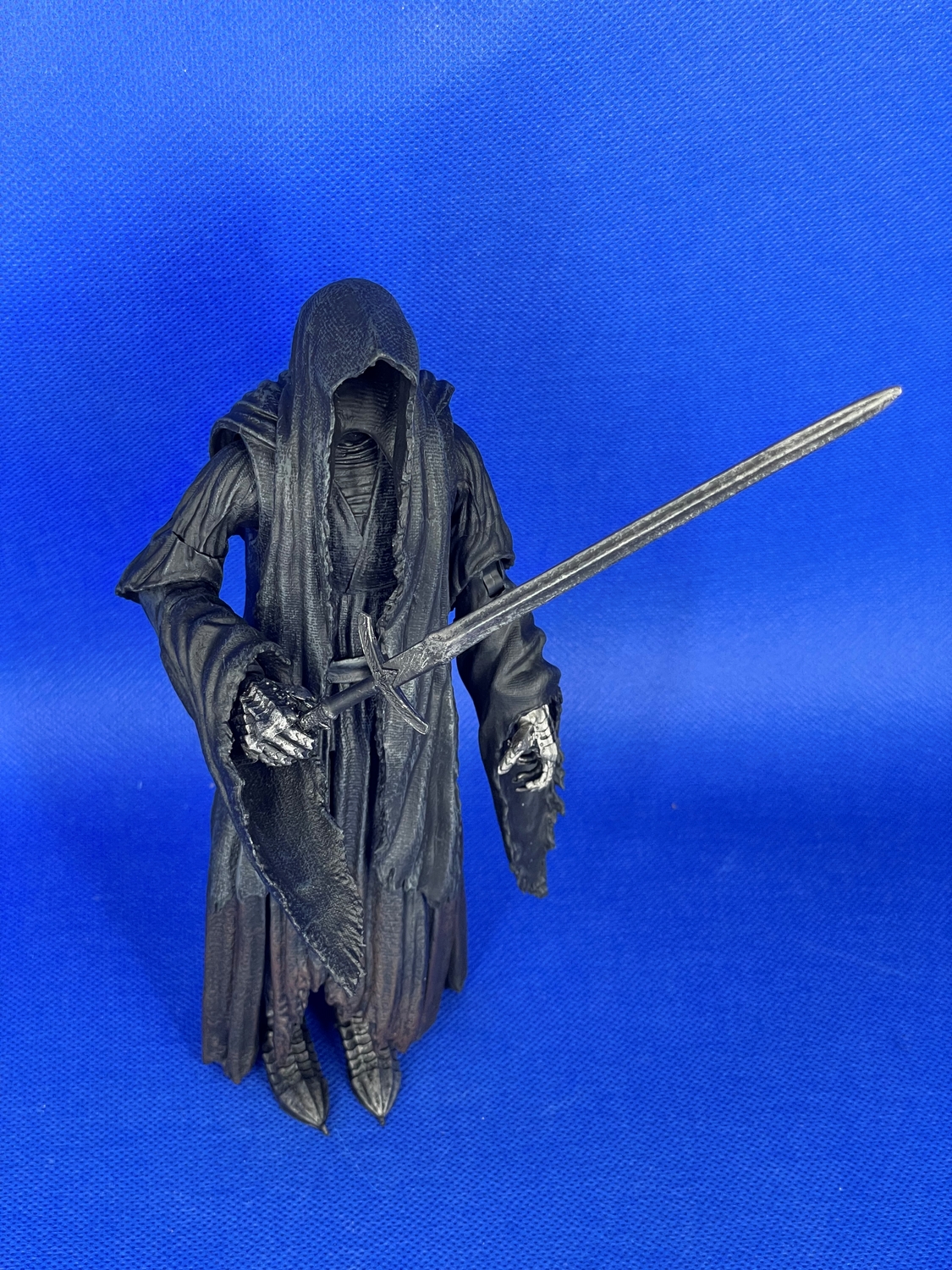 Nazul comes with Sauron's cape and an assortment of swords including the vorpal sword. The creature is faceless so as not to kill some of the mystery and is sporting his metal gauntlets and booties. The robes look great with lots of layering. We found it difficult to get the swords in his hands as the robes restrict movement of the wrists as well as what you can fit into there. The robes in general really restrict movement on this figure, especially in the legs, making it hard to pose and balance. Cloth robes would have been better but price point restrictions probably dictated the final design here. 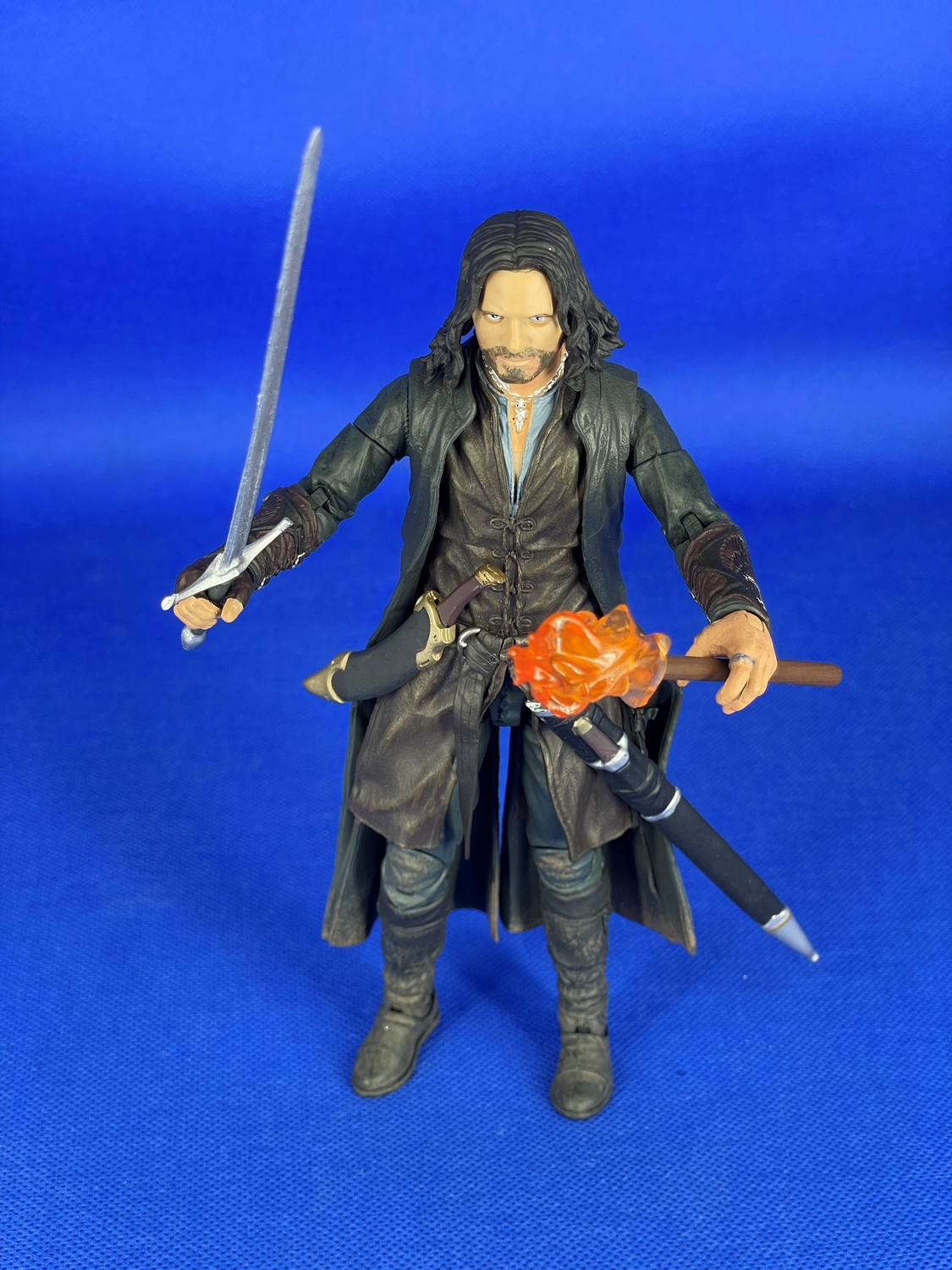 The king returns with Viggo Mortensen's likeness featuring Sauron's arm and leg, a torch, a dagger, and two swords including Anduril. Again, plenty of detail on the weapons and clothing, including his necklace. There is a nice layering effect with the clothing and jacket, adding depth to the figure. Despite the jacket, we didn't find that it restricted Aragorn's movement and we were easily able to pose him. The sheaths are quite functional and easily hold Aragorn's weapons. The torch has a nice translucent effect as well giving it a more lifelike appearance. Given the large assortment of accessories and detail, Aragorn is our favorite of this wave. 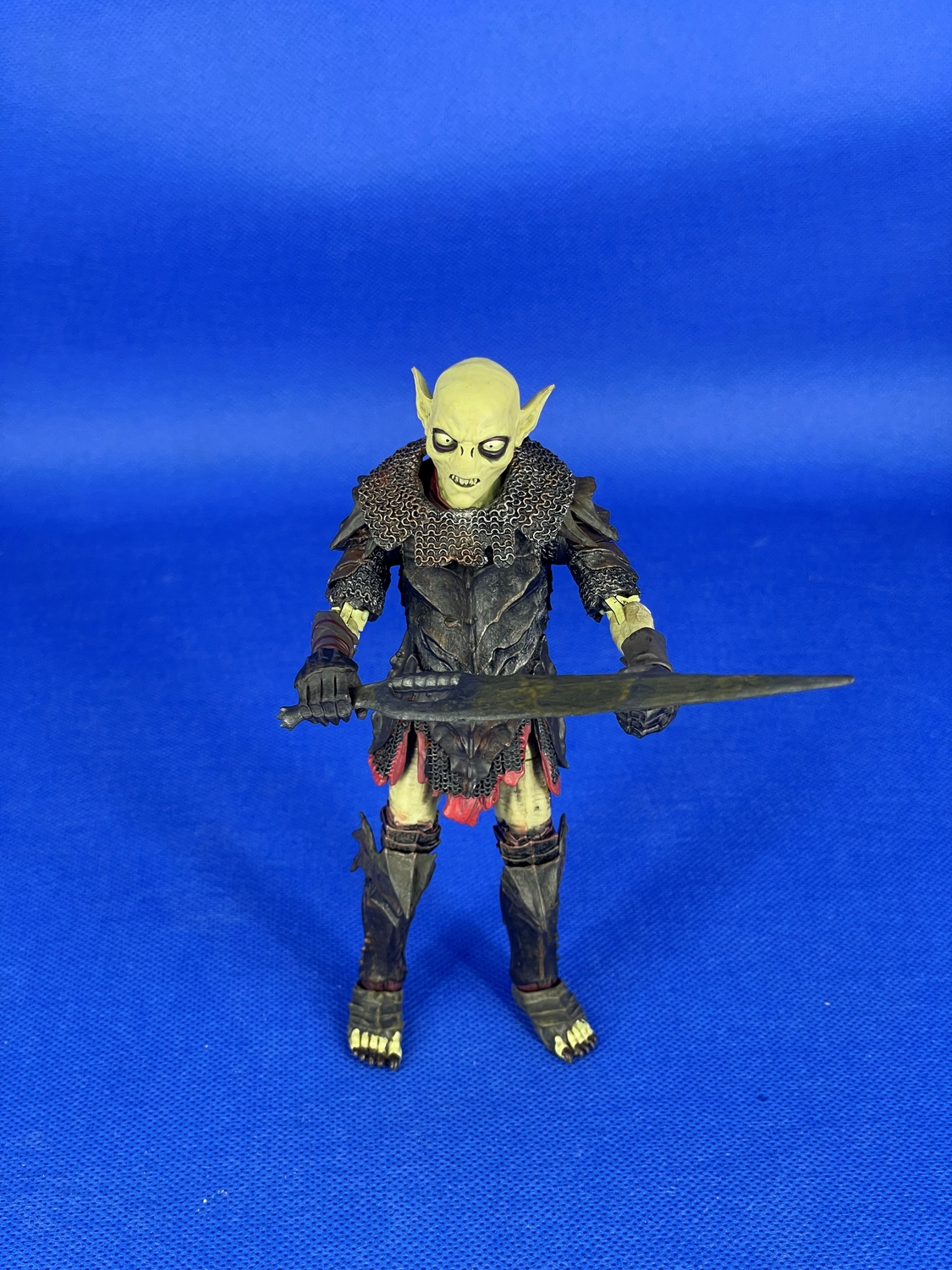 The Moria Orc come with Sauron's club and a sword, a spear, and an alternate head. The head was pretty difficult to switch out and it may get easier over time but given the placement of the armor, there is no easy way to apply pressure without concern of damaging it, but we managed to switch the heads without breaking anything. The figure has a tremendous amount of detail in the armor between the chain mail and the plating. The head sculpt is great and hideous for the right reasons, there was even care in the partial head sculpt peaking through the helmet, detail was not sacrificed here. It was easy to get the weapons in the hands and achieve a variety of poses. 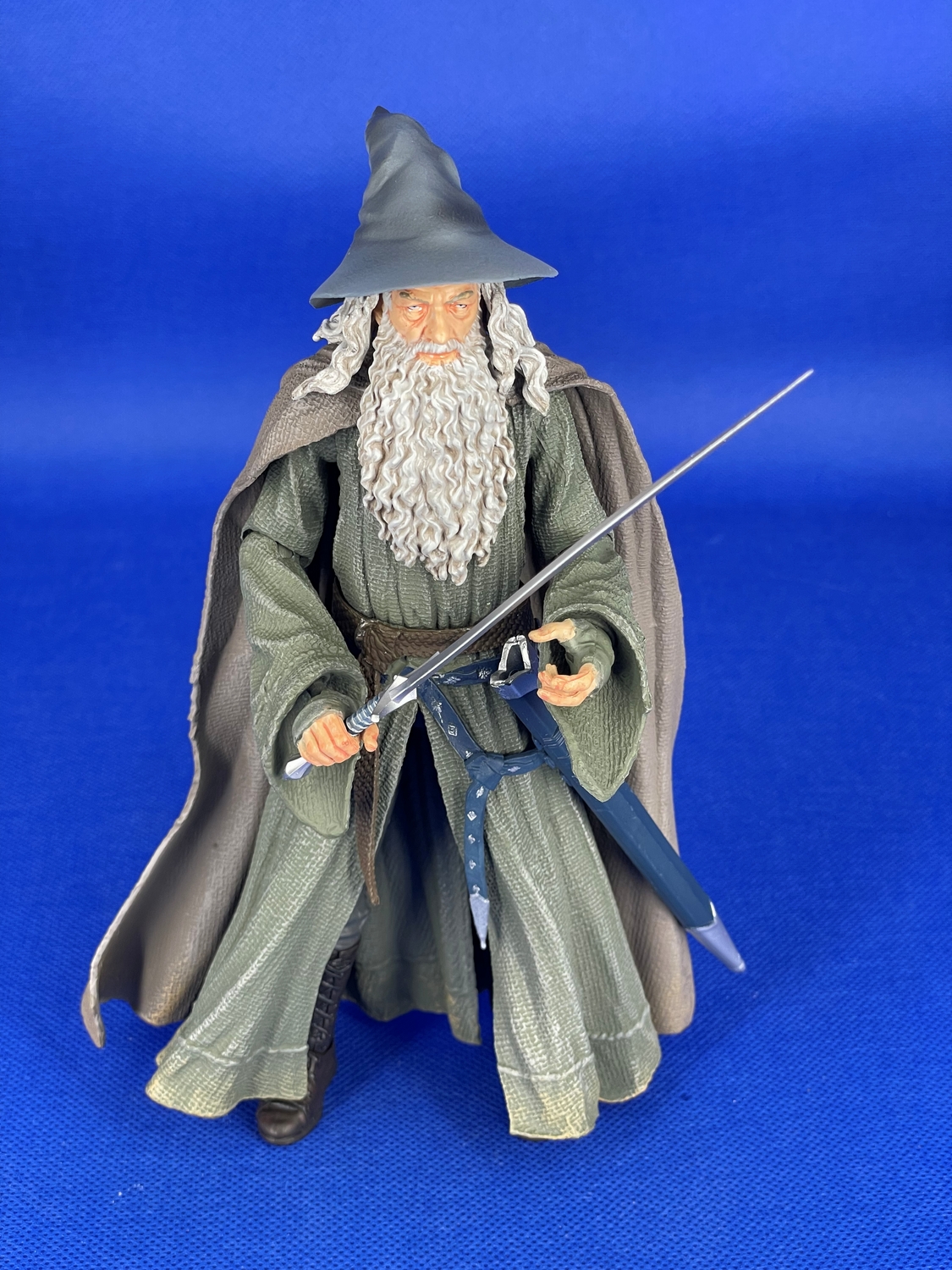 This is the first wave without Sauron parts, as he is completed in the previous wave. Gandalf does however have several accessories including his hat, staff, alt hands, pouch, and sword. Would have been nice two also include his pipe, but there is more than enough here. Again, great detailing on the clothing and beard and a nice likeness of Ian McKellen. It was easy to manipulate the figure into holding the weapons and posing. There are some limitations due to the length of his robes but he achieved a range we found appropriate for a wizard. He's our favorite in this wave due to the accessories, detail, and because he's a wizard. 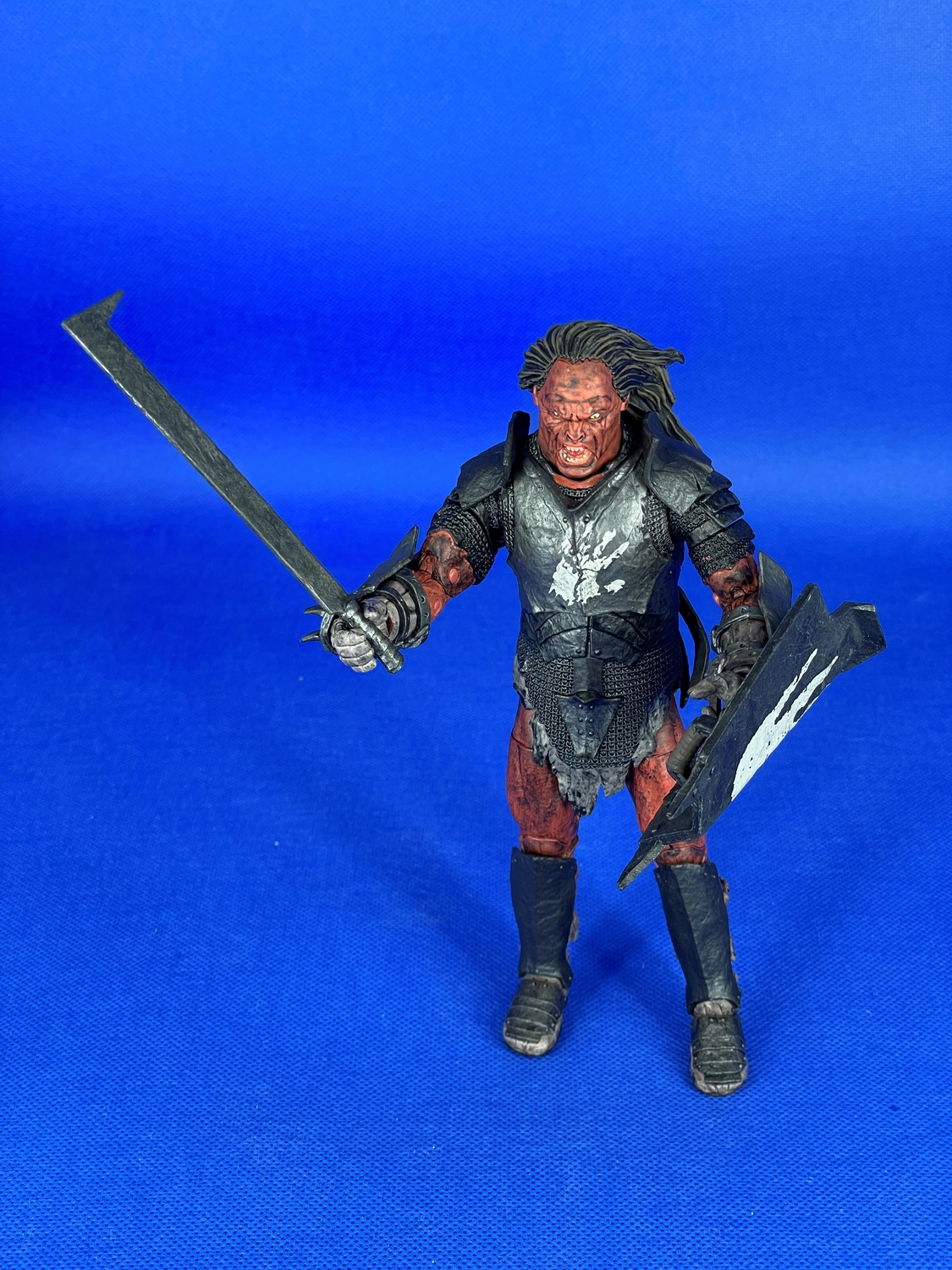 The Uruk-Hai Orc features alt hands, sword, shield, spear, and alt head. Again, like the Moria Orc we found the head really difficult to swap out. The armor here protruding around the head made it more so difficult than the other orc and the fin on top of the helmet does not create a solid surface to push down. What really stands out here is the head sculpt capturing the ferocity that is the Uruk-Hai. The armor and the detailing really make this figure leap off the screen into this medium. DST also captured the hand prints on the armor and shield. The shield requires a little effort to get it into position but once on the arm, it remains firm. This one is fun to pose and troop build if you desire, a regiment would look great. 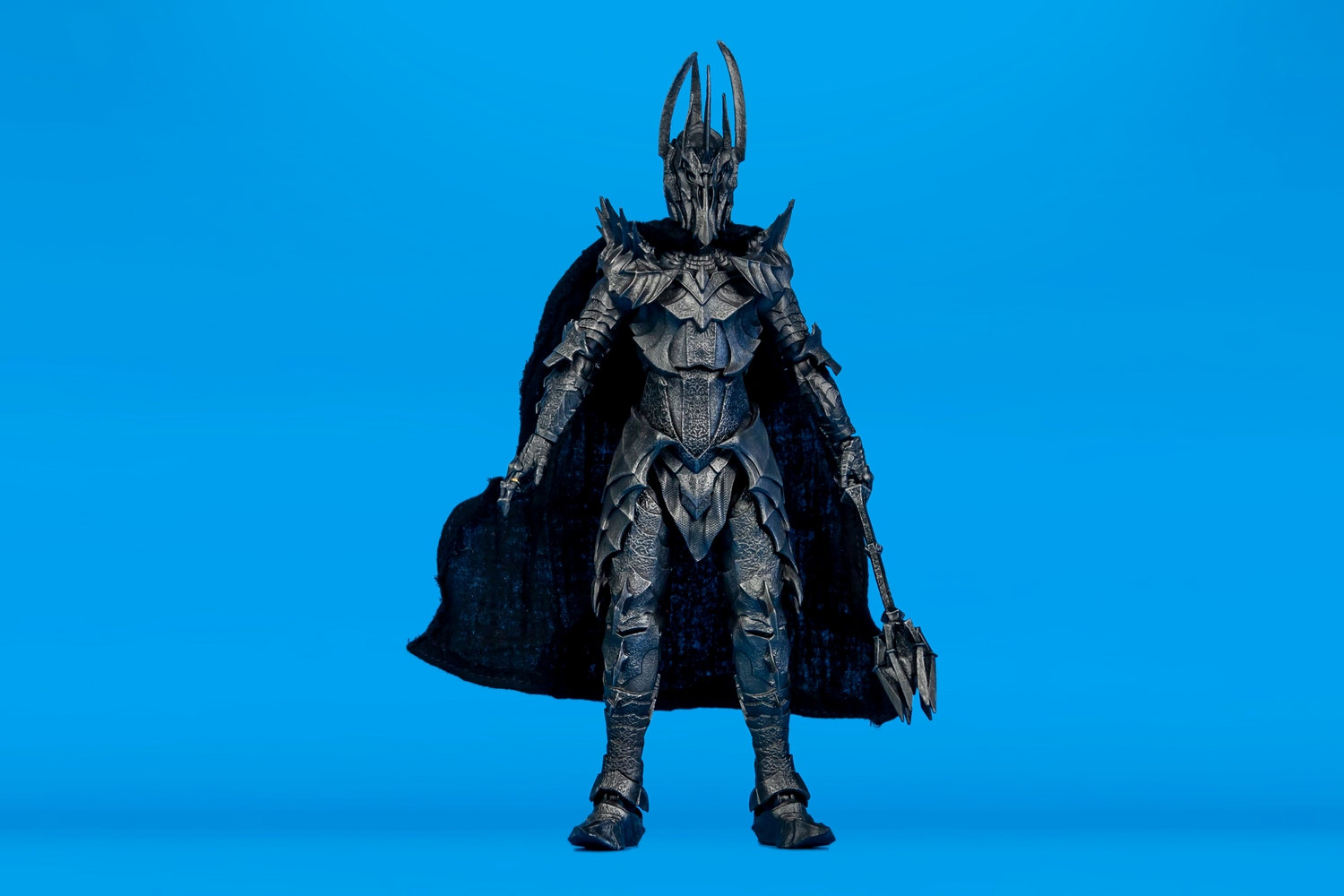 Sauron is a great likeness for his appearance in the film. This figure is well worth collecting the waves as he towers in size over the others. Each part is well-detailed and has a great range of motion. The armor looks great and the cloth cape really elevates this already amazing figure. You'll even notice the ring on his figure here as no detail was missed. You'll absolutely want at leas the first three waves in order to get this amazing figure, it would be a shame to miss out. His tall statue though is a little difficult to balance some times due to the higher center of gravity, but we were able to achieve poses without assistance of a figure holder. 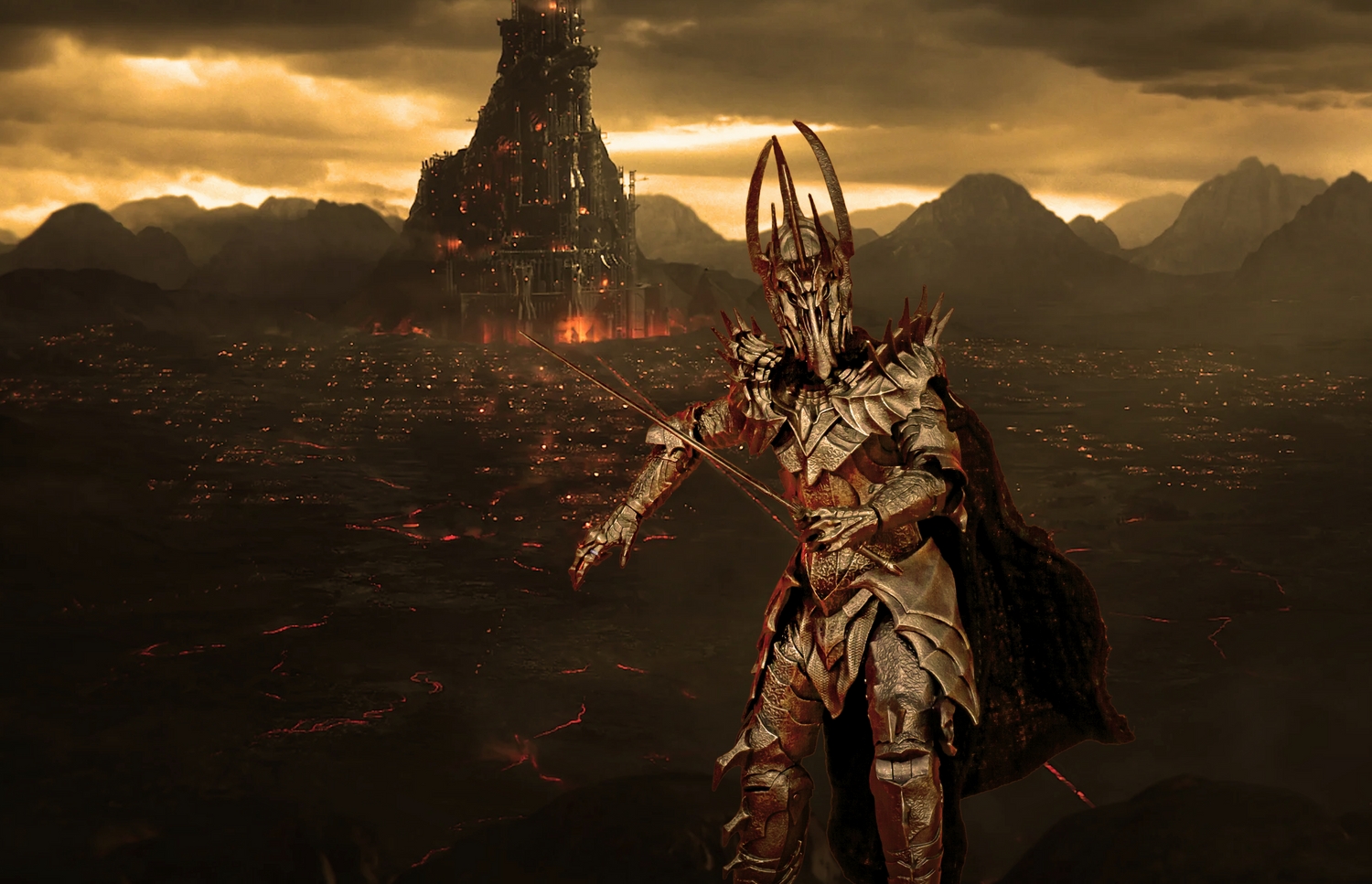 All together these sets are amazing and from our conversations with DST, we know there will be other fan favorites on the way. As of this writing the Gollum figure released featuring new accessories and another figure to add to the line. We can only hope others are on the way soon with another amazing build-a-figure, one can only hope it's a Balrog.