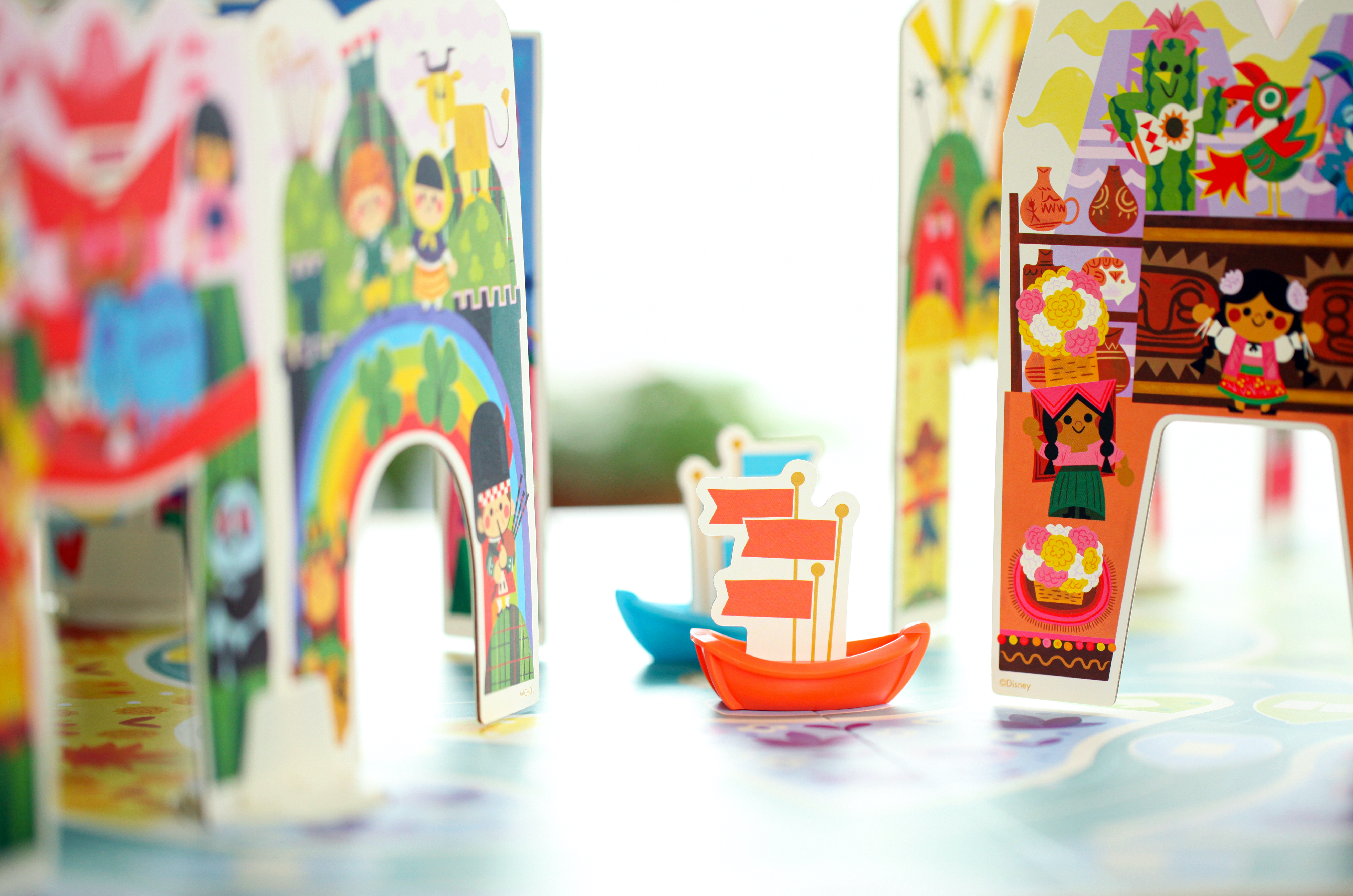 A catchy tune and a catchy game. We found this depiction of the ride faithfully captures the elements of childlike wonder while providing a fun and engaging experience for a younger crowd and Disney nerds alike. It's also really hard to play this game and not have the song stuck in your head! Simplicity is key here to make this accessible to a younger crowd and the game gets a lot of economy out of a few parts. The set contains playing cards, the board components, and game tokens. We tested this with a six year old we keep on hand for durability tests, and they were able to set it up on their own. If there's one thing we know to expect in Funko Games products it's the level of detail that helps build a world within the board game. The 3-D layout of the board really made it feel like players were traveling between the iconic locales of the Small World ride. The artwork captures the design of the characters in the ride and gives a real familiar feel. The clock, which is easily identifiable as it is the first thing riders are greeted with, serves a central purpose here not only to add dimension to the board but to keep track of game time. We loved the addition of making the player tokens boats which help players feel like they too are in a ride as movement is less roll based and more at the mercy of the slow moving boats, but there is no sudden bump at the end of this game. The setup is fun and easy at you just stick the panels into the bases in any order. The cards are put into a draw and discard pile holder then it's off to the boats. As movement is simply one square each turn, there is no need to roll or keep track of moves. You simply draw the number of cards that match the number on the space. During ones turn the object is to match the pictures on the cards you have to the characters in your "room." There are four rooms on the board depicted by the four colored areas your boat can be located in at any time. To add an element of strategy to the game, the walls in the rooms can rotate any where from one to four at a time. This allows users within those rooms to access the characters on the other side, without traveling around the game board. A tactic that can be used to score a point or prevent the other team from scoring. During play, players can draw a clock card which moves the day toward night, ending the game. The player with the most played cards wins. While the gameplay is really simple and not meant to be overly challenging, we found ourselves getting into the game just based on the nostalgia of our childhood experiences on the ride. We do recommend this as a family game for a younger crowd, but adults playing along may be surprised by how fun the experience is and let's be clear, this game is more of an experience than a game. We see this as the perfect game to prep for a Disney visit or while taking some time out of the sun during an extended weekend at the beach house. Grab yourself a copy and who knows who you'll run into at the store as it is a small world after all.