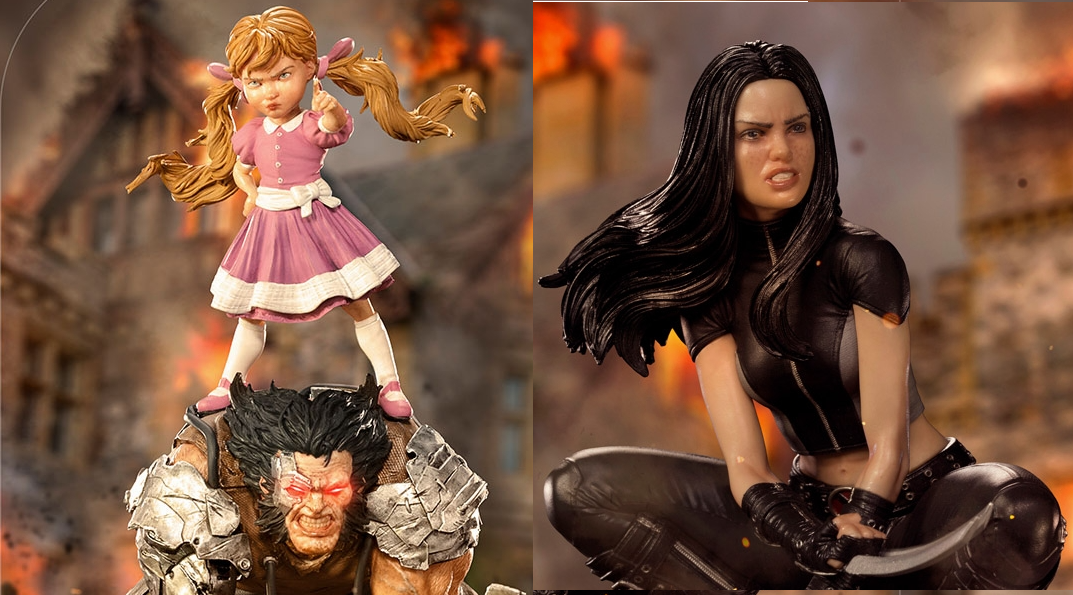 You can preorder both statues at BigBadToyStore.

On the wooden foundation of the remains of Mansion X, an automaton replicated from the wild Canadian mutant named Logan unsheathes its claws from its fists and prepares its reconstructed half-machine and half-man body for imminent combat. On his back, a seemingly harmless little girl in a pink dress uses her advanced intellect to direct her counterpart, friend and ally, to join the group of mutant heroes X-Men against the gigantic Sentinel robots controlled by Magneto, and their allies of the Mutant Brotherhood. Thus, Iron Studios presents its statue "Albert and Elsie-Dee - X-Men - BDS Art Scale 1/10" with the unusual android allies of Wolverine and the X-Men.

Created by cyborg supervillain Donald Pierce, the droids Elsie-Dee (a pun on LCD, for their artificial origin) with the appearance of a five-year-old girl, and their counterpart, Albert (a robot, copy of Logan), were designed to kill Wolverine. Thanks to the evolved artificial intelligence of Elsie-Dee and Albert (named after Albert Einstein), they come to the conclusion that Logan was a noble person and didn't deserve to die, and thus, abandon their original mission and become eventual allies of the mutant hero. Elsie-Dee has superior intellect, can interact with computers, and has above-average strength. Albert has similar characteristics, claws like Wolverine (but not adamantium), fighting abilities, and reinforced armor on the metallic parts of his body.

Created by Larry Hama and Marc Silvestri in 1991, Iron Studios features never-before-seen statues of these characters, increasingly expanding the cast of characters that make up its diorama of the X-Men versus their greatest enemies, and each collector can create the diorama of his preference. The statue is already available for Pre-Order. Stay tuned for the many news that will come soon.

With her razor-sharp claws, fists, and feet unsheathed, the young mutant heroine poses on the rubble of demolished Mansion X, leaning on the remains of a wooden pillar, with an urn containing an ancestor's ashes lying at her feet. She prepares to jump in and unleash all her fury against the invading forces at her home led by Magneto, the villain-controlled Sentinel Robots, and their followers, and defend her adoptive family, the X-Men, and their allied group X-Force. Expanding the largest collection of Marvel mutant heroes statues ever produced, Iron Studios introduces "X-23 - X-Men - BDS Art Scale 1/10" featuring the lethal Wolverine heiress.

In a top-secret program, geneticist Dr. Sarah Kinney produced a female embryo using her own genetic material combined with material from the Canadian mutant Logan, thereby generating her daughter Laura Kinney, a clone of the wild mutant Wolverine. Raised in captivity, she was codenamed X-23 and was trained to be a killing machine, and even with outbursts of extreme rage and violence similar to her father's, with the support of Logan and the other X-Men, Laura overcame her traumas and asserted her identity as the daughter of Logan and Sarah. Like Logan, X-23 has accelerated regenerative healing factor, longevity, and superhuman senses, but unlike her father, she has two retractable adamantium-coated bone claws on each arm and one on each foot.

Created by writer Craig Kyle for the animation X-Men: Evolution in 2003, X-23 made her first appearance in the 41st episode of the series and was later featured in the comics on the adult-themed series NYX with a script by Joe Quesada and artwork by Joshua Middleton, and later the legendary Chris Claremont introduced her to the X-Men. In theaters, in the movie Logan, she was played in 2017 by Dafne Keen, in the 10th production of the X-Men film franchise. Already available for Pre-Order, the X-23 statue can both add to the X-Men Vs. Magneto, Sentinels, and mutant villains combat diorama scenarios, as well as compose others, in the X-Force formation or according to the preference of each collector.