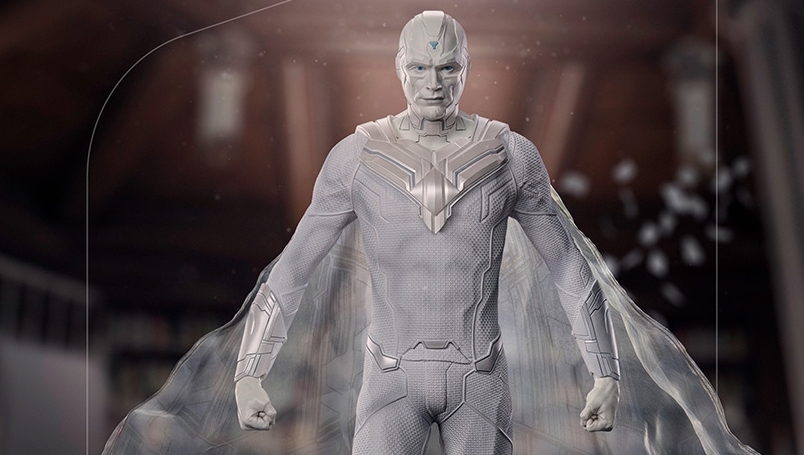 After having died at the hands of Thanos, the avenger Vision had his vibrânio body rescued and rebuilt by the extra-governmental intelligence agency called SWORD. They had the hopes of reactivating it and using it as a weapon. After several experiments, all attempts were unsuccessful useless as they had not found any known energy source. In a new white form, he is eventually reactivated by traces of Chaos Magic found in a SWORD drone, a drone rescued from the city of Westview, which the magic of Wanda Maximoff had modified. Programmed to destroy Wanda and the Vision she created with her magic in the so-called Westview Anomaly, after fierce combat with her counterpart in the city library, White Vision has access to past data from her experiences as an Avenger and her love for Maximoff, thus opening the door to reason and emotion. With this memory, he then leaves to reflect on the facts.

The statue is already available for Pre-Order and is perfect for an exhibition alongside the already announced Vision and Scarlet Witch - Legacy Replica 1/4 - WandaVision statues, further expanding the cast of MCU characters replicated by Iron Studios in its lineup on a 1/4 scale. The item was unveiled at the annual Inside Iron Studios: Second Edition virtual event during CCXP Worlds 2021 at the Worlds to Collect arena. Check out this and much other news on Iron Studios' YouTube channel and social media.

- Cloak made in fabric