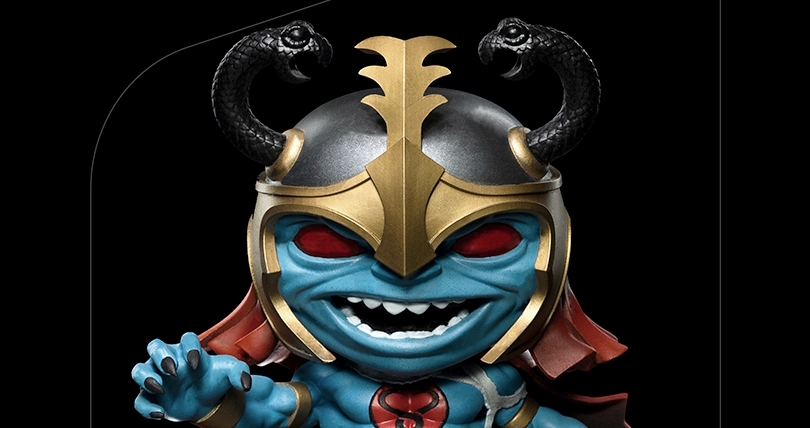 In the form known as the Ever-Living, the evil sorcerer with an ominous smile on his face, points his right hand as if hes ready to cast energy bolts from his fingers, against his great archenemies, the ThunderCats, or to punish his often-clumsy minions, the Mutants, the iconic villain from the 1980s gets a stylized Toy Art version in the statue Mumm-Ra - ThunderCats  MiniCo by Iron Studios, on a pedestal that refers to his altar in the interior of the Black Pyramid.

With features of an Egyptian deity, the mummified ancient Mumm-Ra controls the darkest corners of the planet known as the Third Earth. However, while summoning the power of the four entities known as the Ancient Spirits of Evil, his bandages brake up and he transforms into a decaying form of a giant with blue-gray skin, a muscular body, and the appearance of a pharaoh. With a helmet and a symbol on his chest in the shape of two connected snakes, he has great mystic powers linked to witchcraft, but when he sees his hideous reflection, he loses his strength and must return to the Pyramid, where he transforms back into the form of a mummy. ThunderCats greatest villain wishes to possess the Eye of Thundera, a power gem, and the source of the feline group of heroes survivors of planet Thunderas powers to amplify his strength and his domains.

Developed by Rankin/Bass, based on the characters created by Tobin Ted Wolf, ThunderCats was one of the most successful animation series in the 1980s, with three seasons and 180 episodes. Revealed on the Inside Iron Studios Day, Mumm-Ra MiniCo is already available for Pre-Order and widens the ThunderCats MiniCo collection already released by Iron Studios. For more news, check out Iron Studios social media and YouTube channel.