The HasLab Proton Pack was unsurprisingly a massive success. Who didn't see a kid or adult dressed up as a Ghostbuster at Halloween during the last 30 plus years? A full-size functional Proton Pack is a no brainer when any life-scale prop sells out almost instantly and commands massive prices in the secondary market (ahem Matty Collector). To make things even more exciting Hasbro announced they were including clips to attach the pack to an Alice frame for added realism. If that excites you then you are probably looking for other ways to enhance your cosplay or complement your pack. Well we are pleased to cover costume and gear components through a five part series. 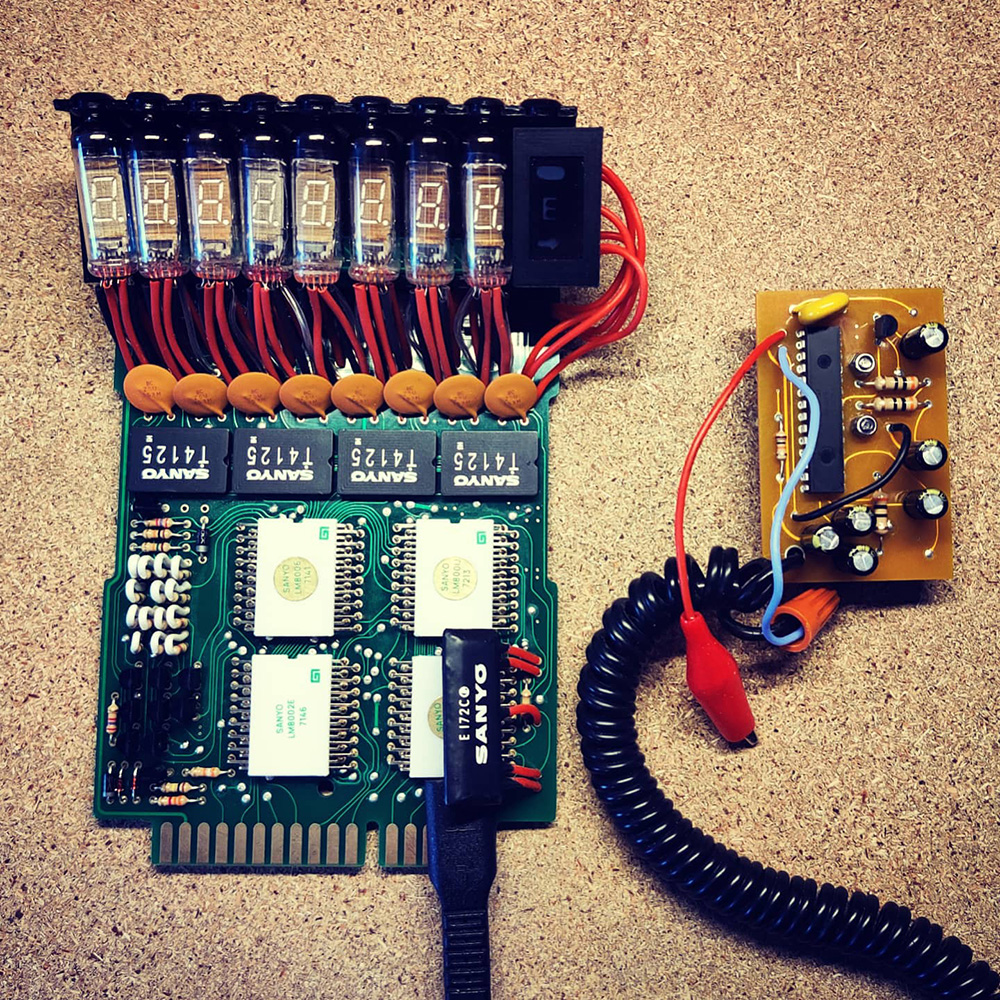 We start this series focusing on the belt gizmo. An important and often overlooked part of the ensemble on costumes sold at retail, the belt gizmo is another way to level up your ensemble. These were made from the Sanyo ICC-808D calculator. Those can go for thousands on eBay now, if you can even find one. While there was no defined function, it is assumed it pertained to regulating the proton pack. Doing some research online, the belt gizmo is not something you can pick up from a big box store or large online retailer. You can spend time searching on eBay or Etsy and find a custom job, but they are pricey and most are garbage. We are not being critical, they are literally made out of cardboard and an assortment of trash. We have seen a range of these from a picture of a circuit board pasted on cardboard cut to shape and 3D printed circuit boards with a mixture of components but nothing really looked decent or even passable if anyone was closer than 20 feet from you. Enter EctoLabs and their 8410 belt gizmo. 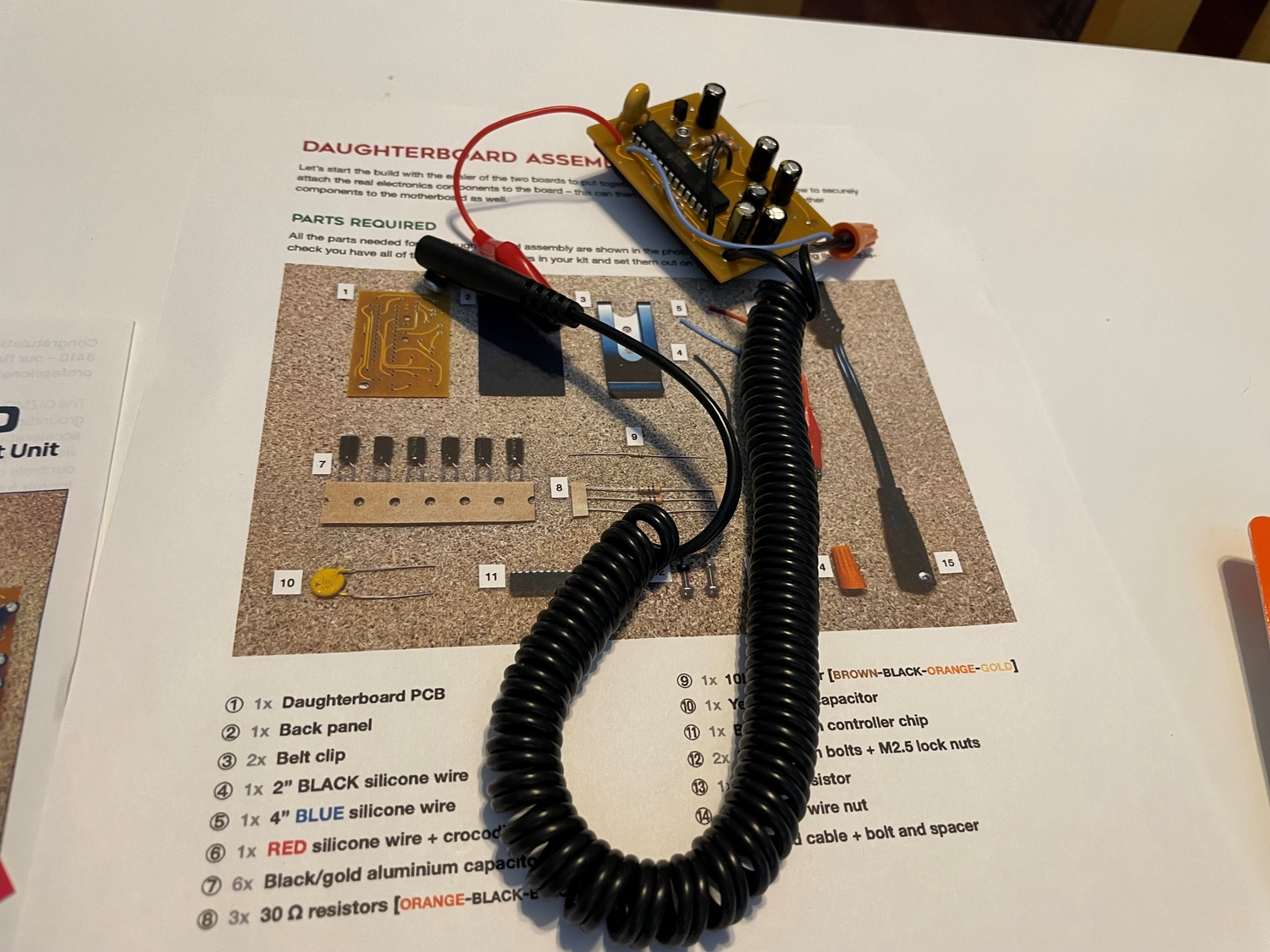 EctoLabs based in the UK is a prop shop that prides itself on screen accurate Ghostbusters props. One thing they do exceptionally well is making Ghostbusters belt gizmos from Ghostbusters 1 and Ghostbusters 2. For the sake of this review and its appearance in both GB1 and Afterlife, we focused on the GB1 belt gizmo, which is in our opinion way cooler. What separates EctoLabs's belt gizmo from others out there is that it is a real circuit board, and it has functional electronics! Now not everything is real, the nixie shelf is 3D printed, as are the Sanyo chips but just about everything else are real components including the number tubes. 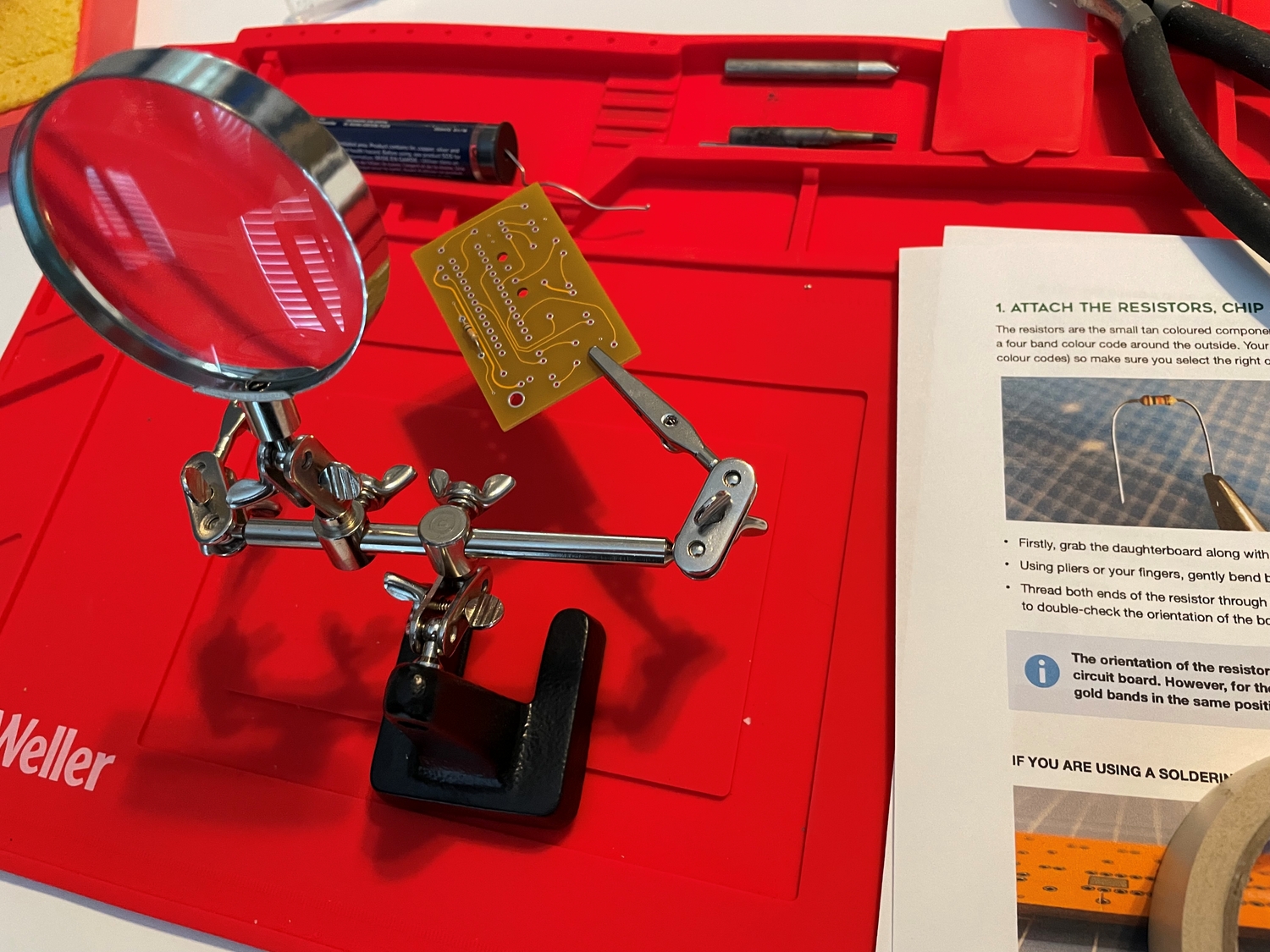 The kit ships in components and assembly is required. We found this to be a great part of the experience. EctoLabs offers two options; standard (solder) and pre-assembled electronics, where the electronic pieces are installed on the circuit board and you can hot glue the other components. We opted for a standard version as it is required for a screen accurate look. Also, the instructions made it really easy and we are confident that a novice could bang this out in about six to eight hours, far less if you have electronic soldering experience. If you are into erector sets or LEGO then you'll love the experience of building this. Just make sure you have some basic tools such as a soldering iron, wire snips and strippers, some masking tape, electronic silver-core solder, brass wool or sponge, precision screwdriver set, good lighting, clear epoxy glue, clear fast setting gel glue, and some helping hands, definitely helping hands. You will need to frequently hold components together and still be able to have a free hand to solder. A magnifying glass also doesn't hurt to assure you didn't solder any components together. For mistakes a solder sucker or soldering ribbon is always good to have handy. 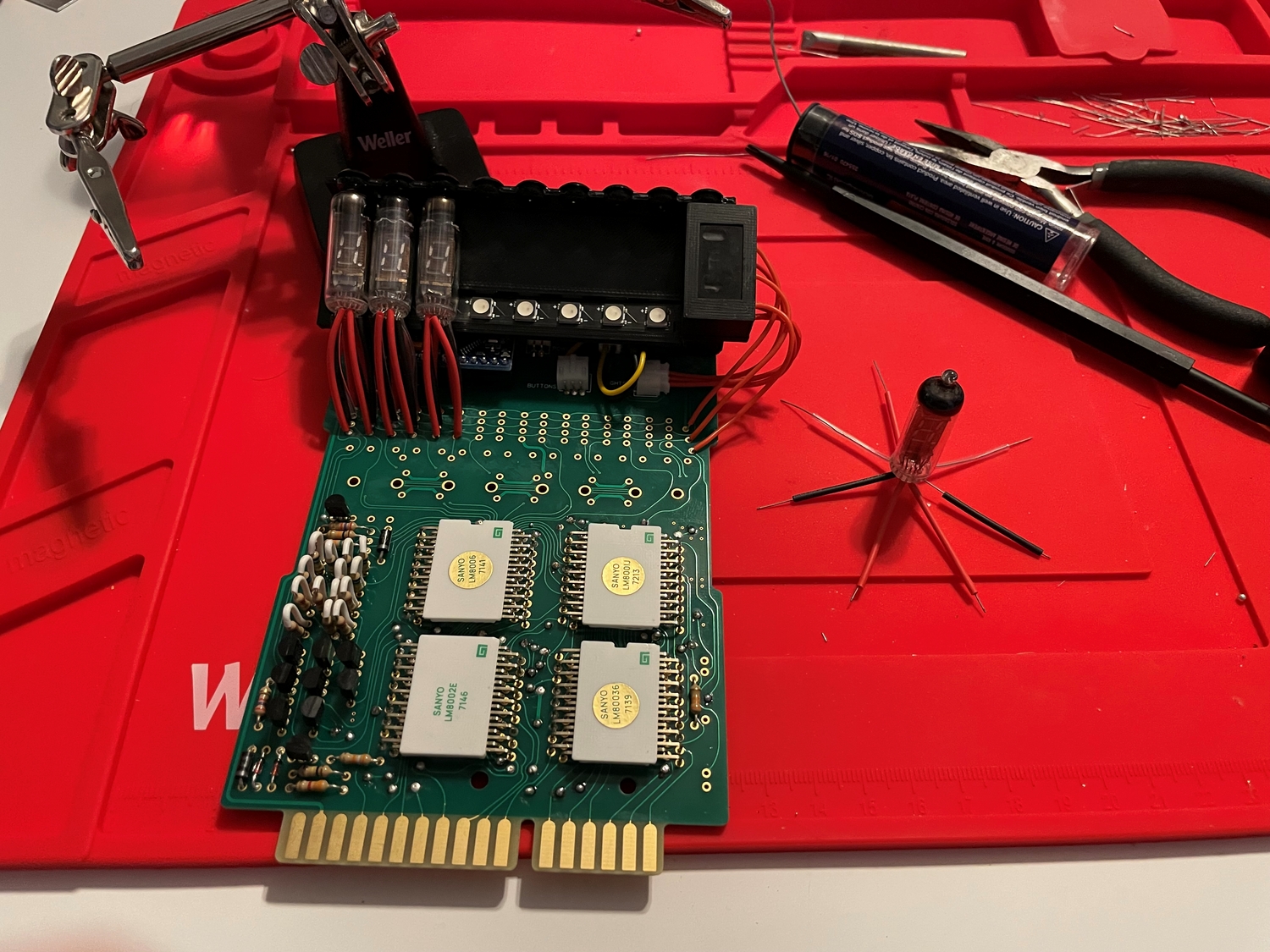 This thing looks more and more amazing as you go on. The devil is in the details here and there are a lot of details. What really sticks out in this already impressive piece are the nixie tubes. Per the site, these are Soviet-era tubes sourced from Ukraine and look exactly like the ones featured in the old Sanyo calculators. Fully assembled this thing looks identical to images of the Sanyo ICC-808D. 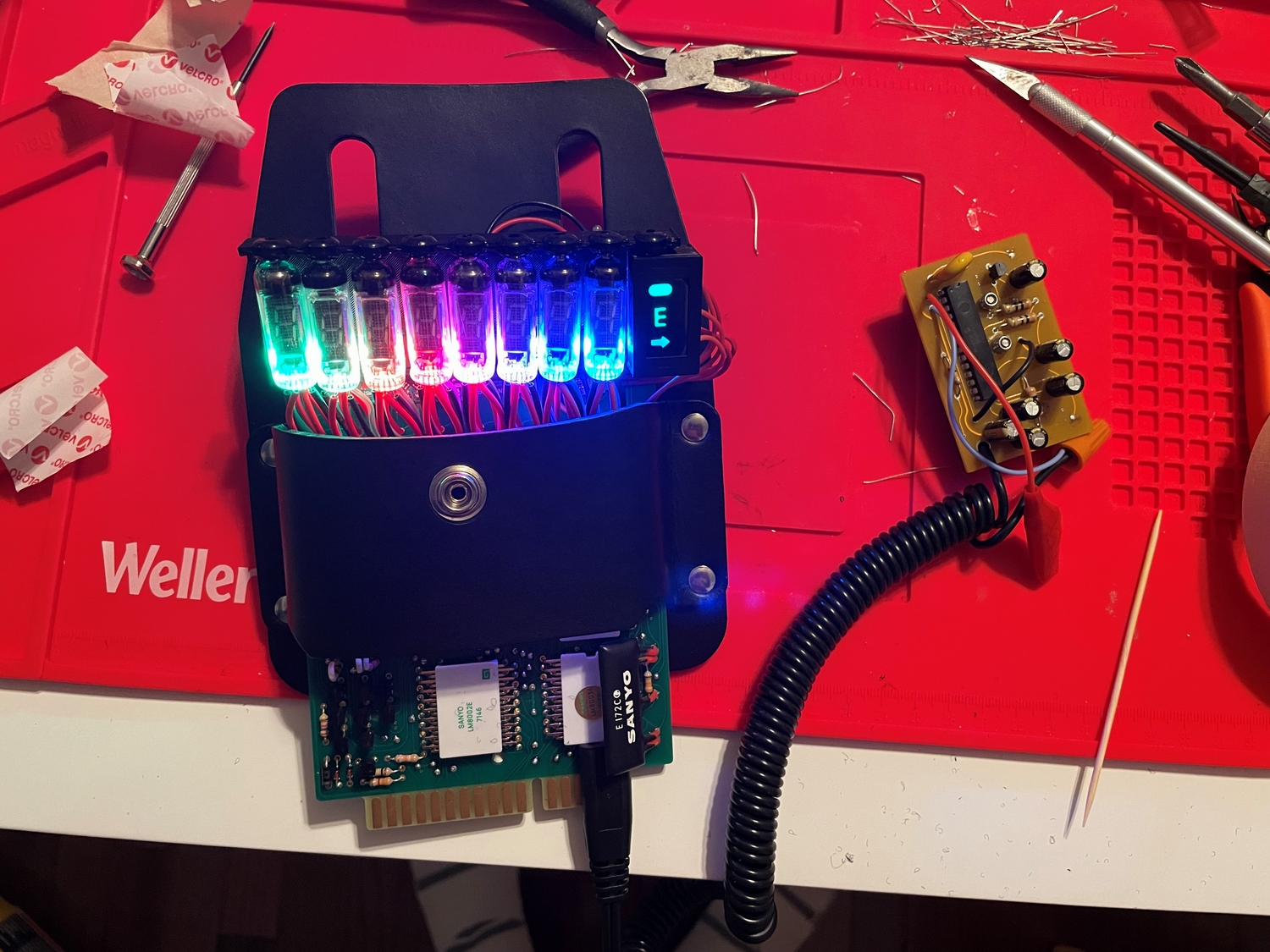 While the numbers in the tubes don't light up the electronics are amazing. The belt gizmos in the film did not light up but it is certainly a nice touch here. The light scheme can change to a variety of colors including rainbow and a variety of patterns featuring pulse, wave, strobe, and more. Best of all, it turns on and off with the simple flick of a switch, and the light colors and sequence change with the push of a button. Designed for convince and looks, this belt gizmo does it all. It also pairs well with the belt gizmo holsters that EctoLabs also sells and provides an elegant way to hide the battery inside your pistol belt. 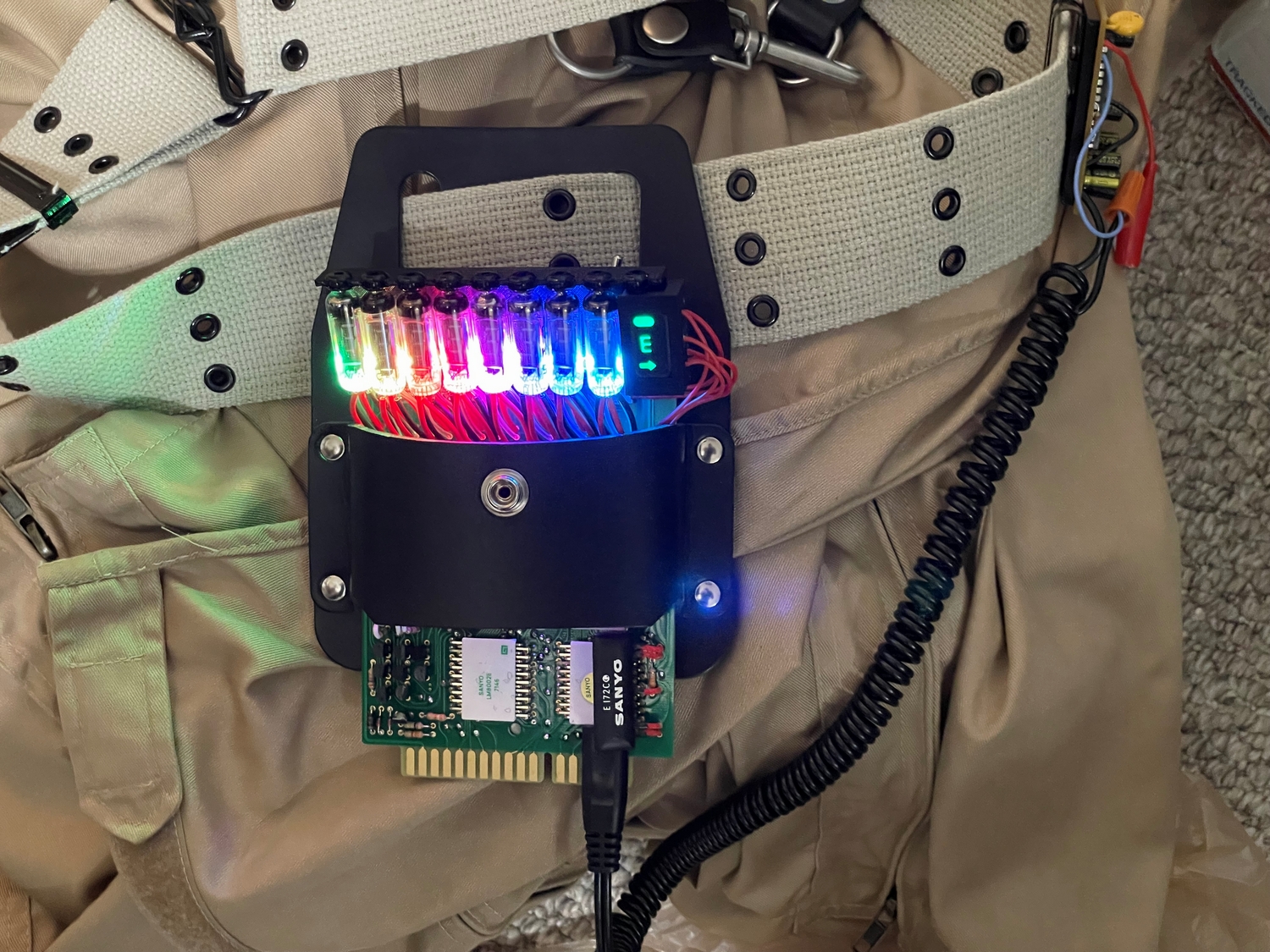 It's always great to find an accessory that steals the show, and this is just that. You'll find it might overshadow just about every other aspect of your ensemble. Easy to assemble, fully functional, and simply beautiful, it's the thing you never realized you were missing from your cosplay. In addition, EctoLabs has some topnotch customer service and will help you with issues during assembly and make sure they do right by you. You can tell they really love what they do, it is evident in the craftsmanship. No other prop shop comes close to making a belt gizmo like this one. The tricky part is getting one. They go up for sale only so often and only have production run of a couple dozen. We suggest signing up for alerts to get advance notice of an impending product drop then making sure you log in right away to by one. Head over to EctoLabs.com to sign up for alerts for the belt gizmos and holsters and check out their other offerings. Until next week, keep those neutrona wands warm!