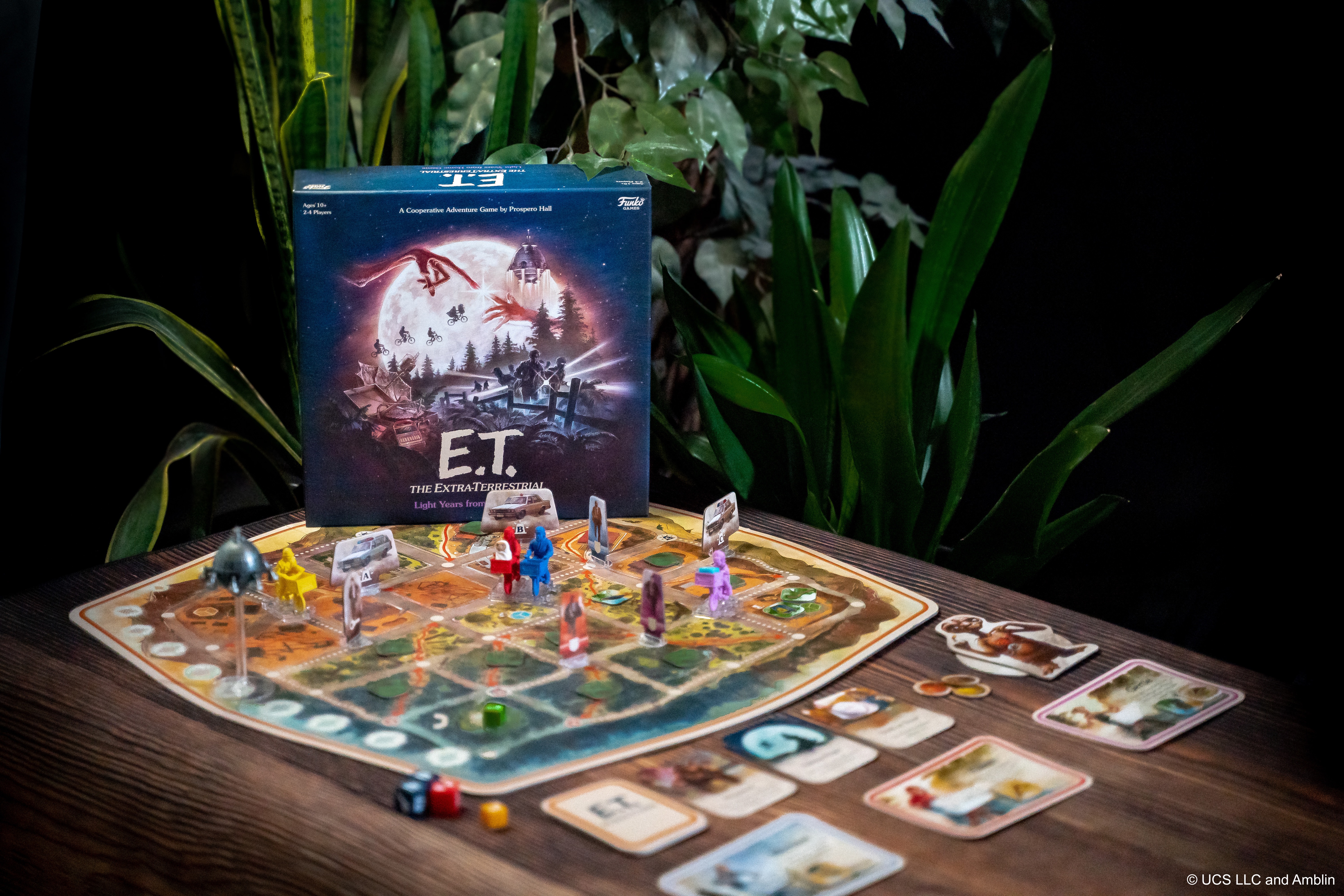 Another childhood classic from the '80's and another perfect follow up to Back to the Future and the Goonies. A major inspiration for the first season of Stranger Things, and perfectly timed with season four, E.T. had several '80's movie tropes including a close knit group of outcasts, aliens, and government conspiracy. The iconic scene of Elliot and E.T. over the background of the moon is known across generations, even by those who have not seen the movie. Check out why this is a game worth phoning home about. Thanks to our friends at Funko Games for providing us with a review sample for this article. 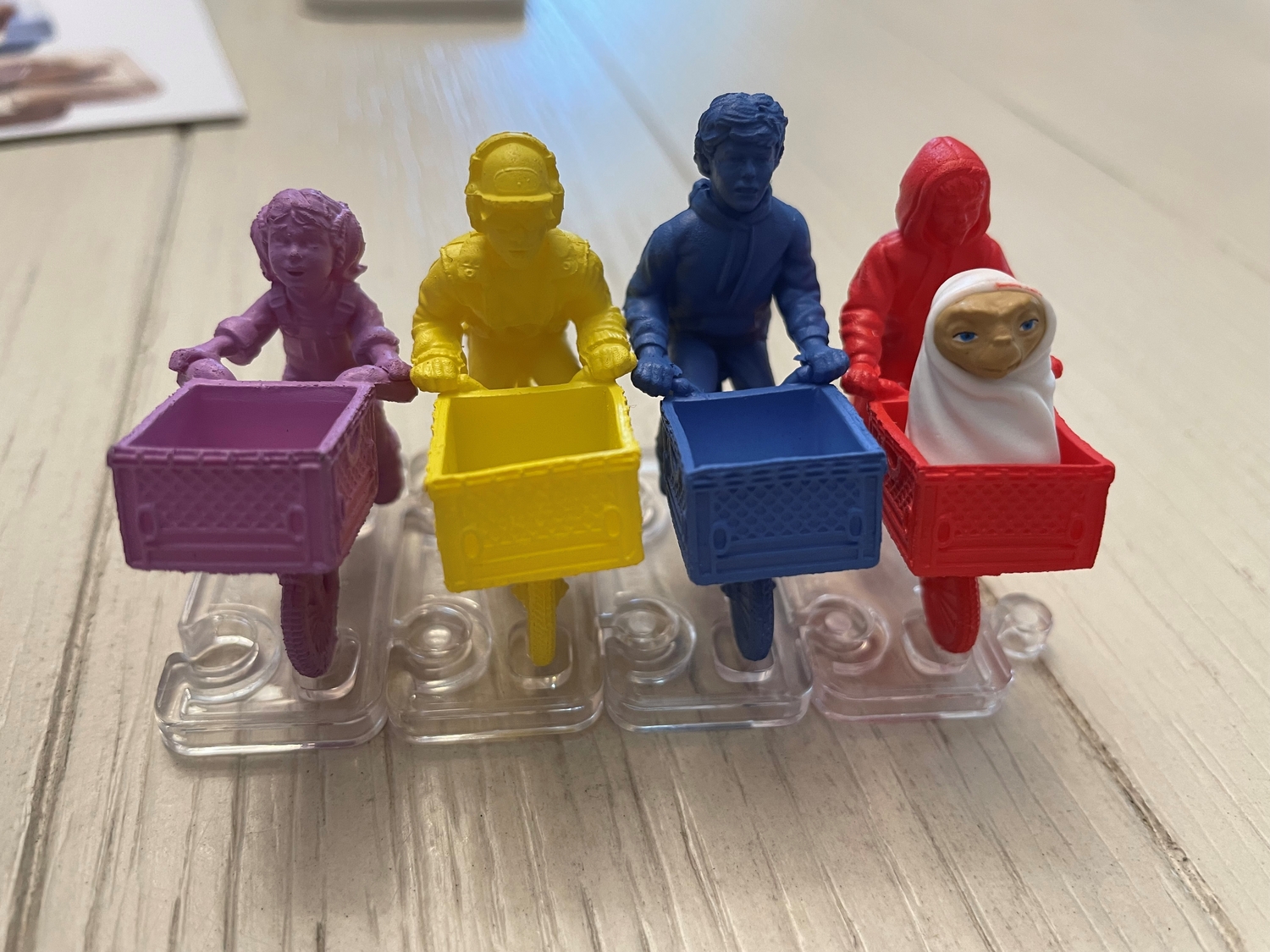 When it comes to capturing the essence and magic of a film and putting in onto a game board, Funko Games and Prospero Hall have cracked the formula. For this experience, the game makers decided to go with what is arguably the best part of the movie, the bike chase to get E.T. home. It's not just the story set up, but the little touches such as the candy, used to move E.T. as in the film, the tools E.T. uses to make his communication device, the scary government agents, and E.T.'s abilities which all feature artwork from various moments of the film. 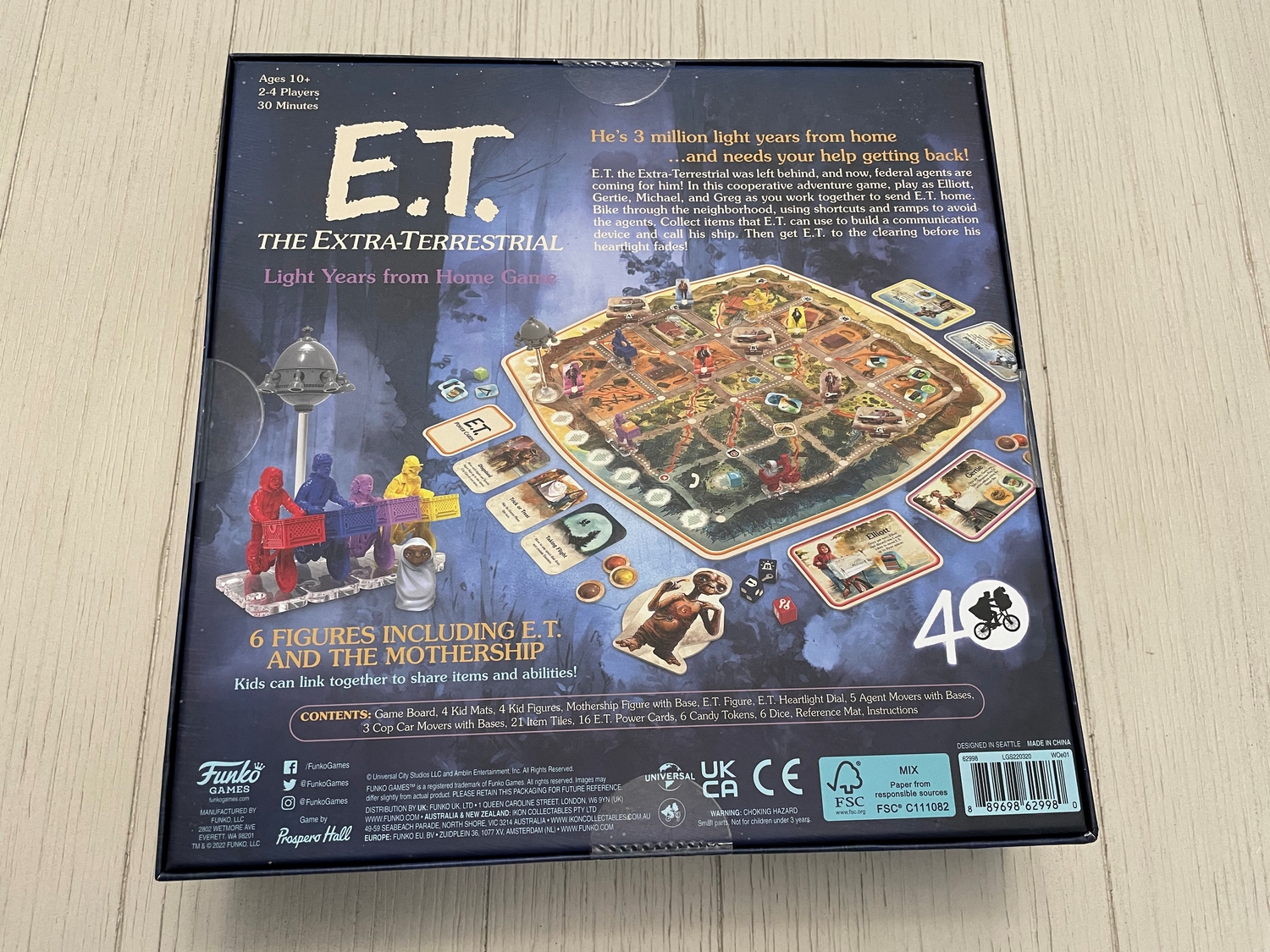 The game board is an excellent representation of Elliot's hometown, providing a nice suburban backdrop with the forest clearing for the final departure location. To make the game board pop, we are given some amazing mover tokens of the hero characters on their bikes, in addition to some enemy tokens split between government agents and cop cars. Let's not forget E.T. making his appearance in a convenient basket ready form! 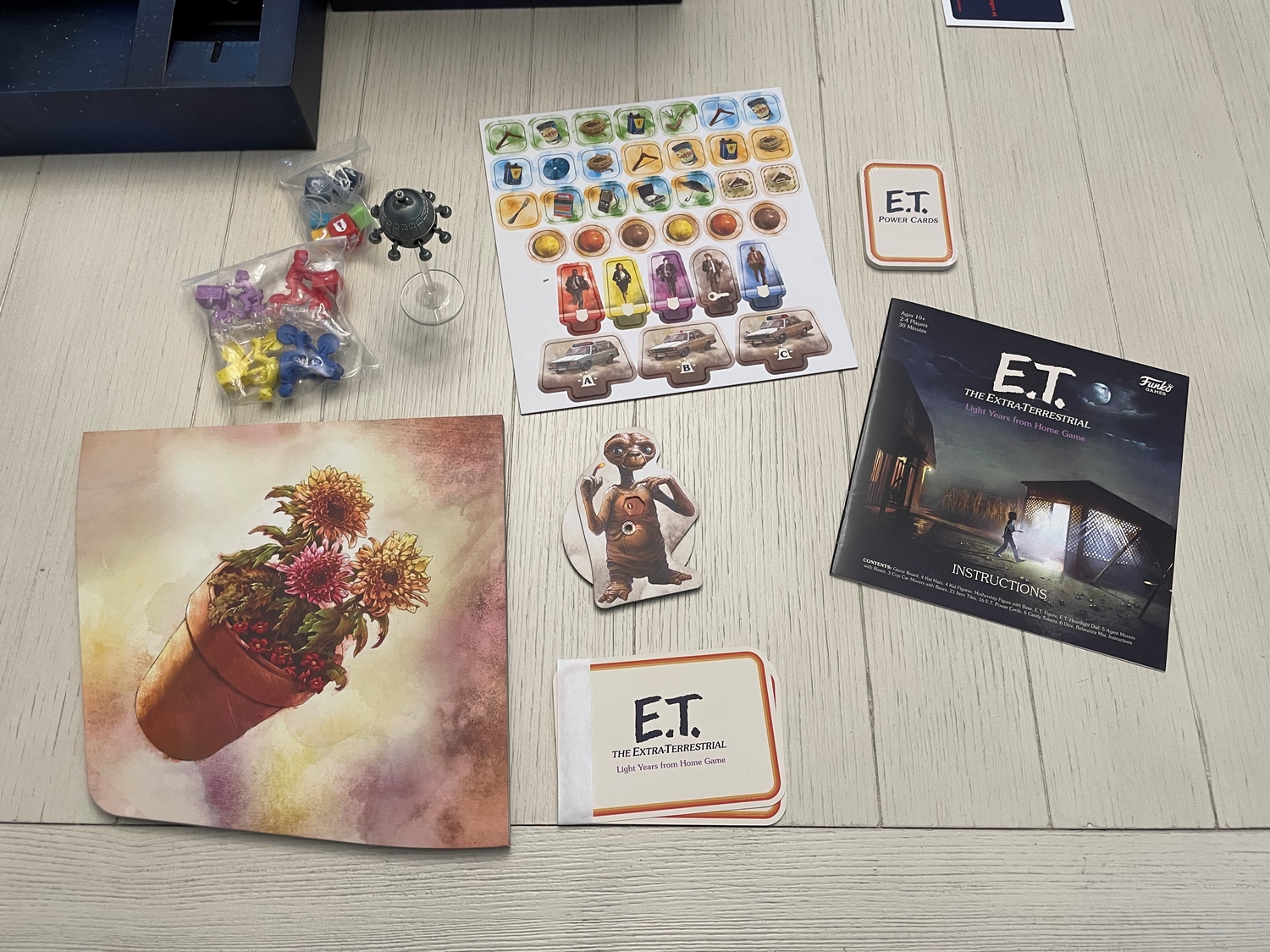 Again, as with the recent previous releases like the Goonies Never Say Die, it's really nice to have the little baggies included to avoid losing any pieces. There are a lot fewer pieces here than there was in the Goonies game as well, which does not detract from the play experience but rather helps keep it simple and reduce setup time, making it easier for younger players, or just a quick game among older friends. 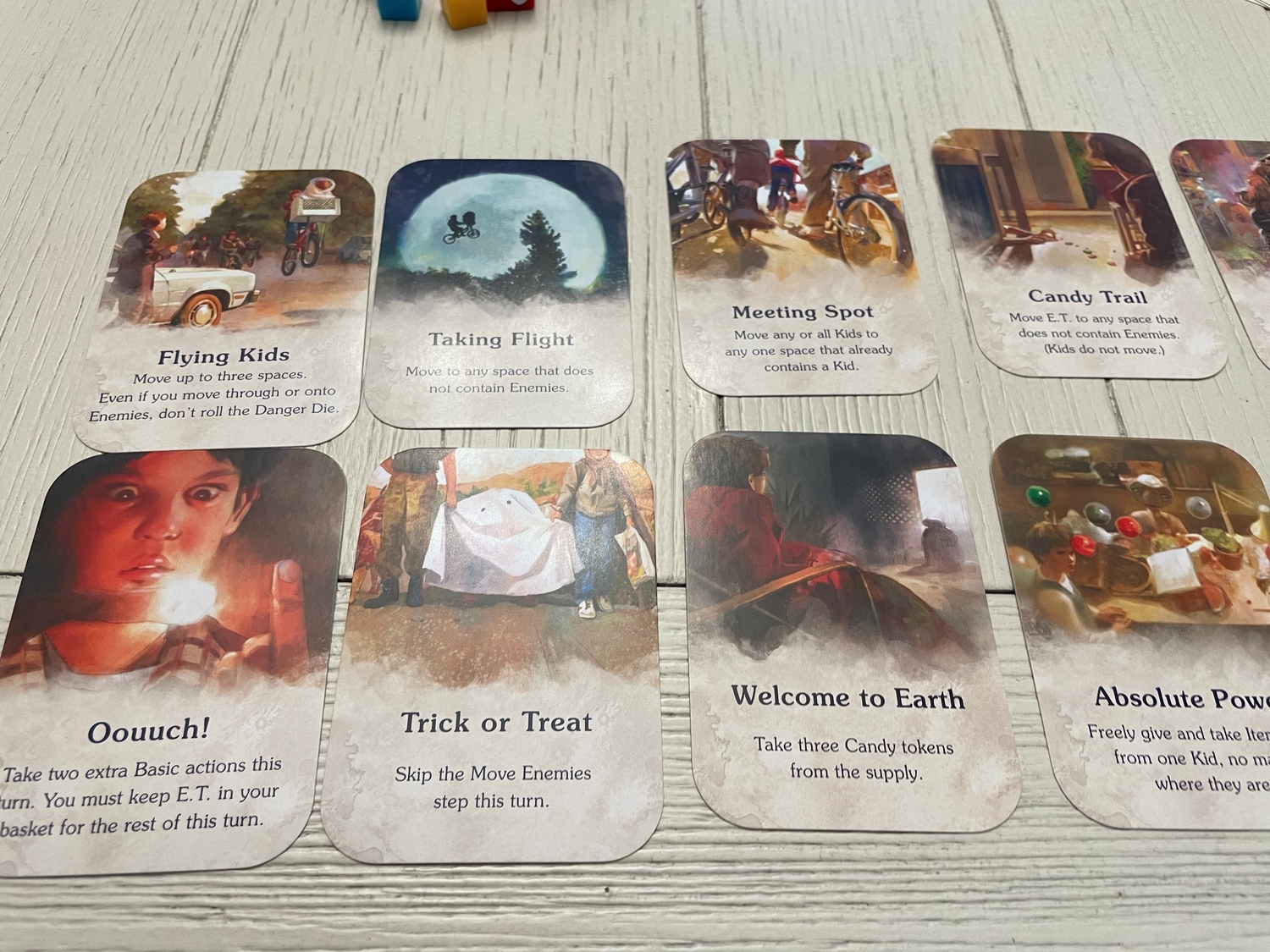 The components are chosen well and do a lot for generating the atmosphere of this game. The candy pieces, emulating the Reese's Pieces from the film, are used to move the E.T. piece, which is exactly the motivator for his movement in the film. The components of the communicator device are taken from objects in Elliot's room and scattered around the board for players to collect. The power cards are taken right from the film and represent some of the more entertaining moments including E.T.'s dress up, trick-or-treating, flight over the moon, escape from the government agents, frogs in the classroom, hiding among the stuffed animals, and many more. 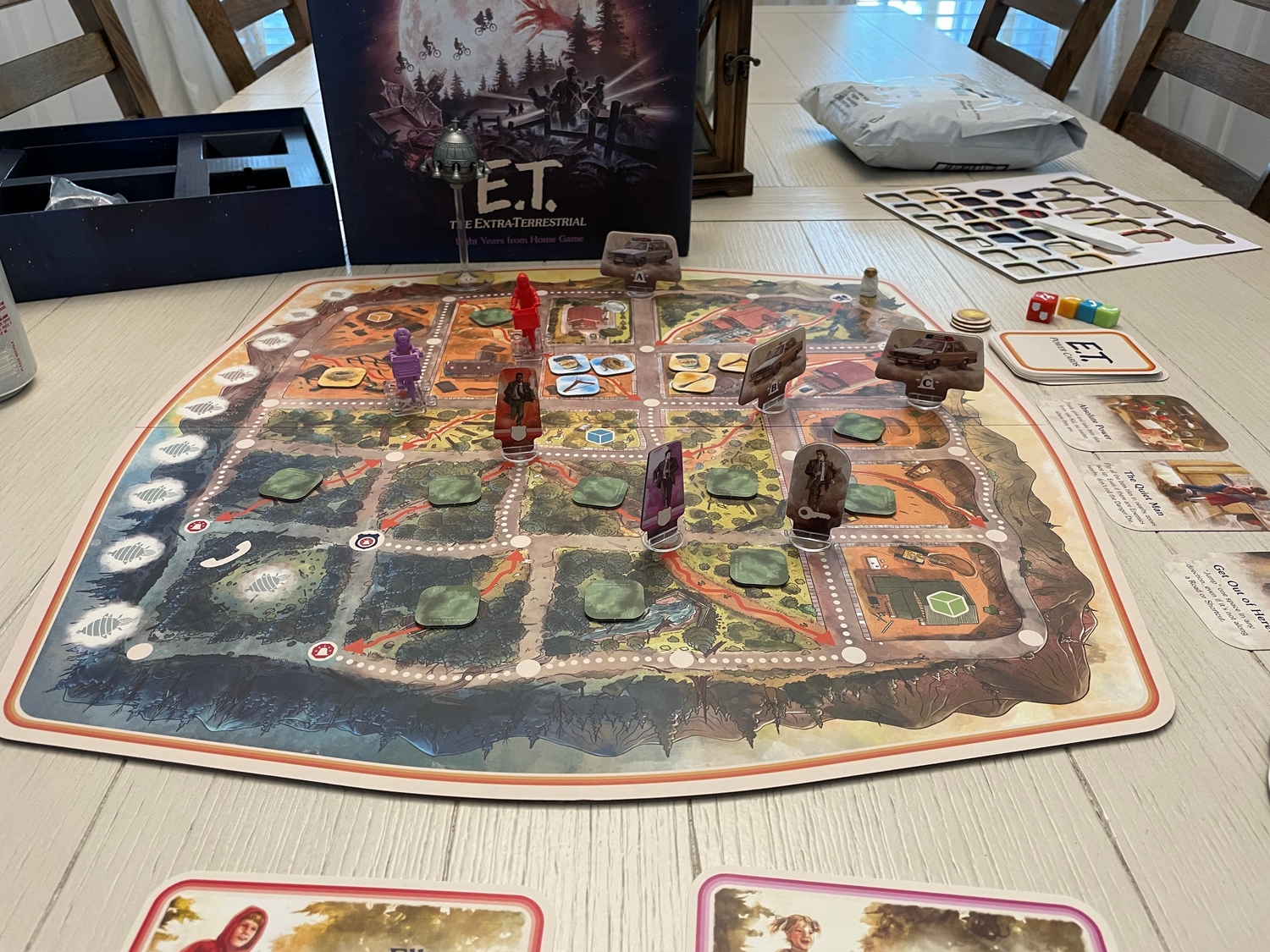 Similar to the Back to the Future and the Goonies games, players are working together toward a common goal, in this case to get E.T. home! There are basically three possible endings here: 1) a successful return to the mothership, 2) the police cars converge and block your characters' path to the mothership, 3) E.T. dies from repeated capture. We were glad to achieve success on our first play through and avoid the darkest timeline.

This is a sequenced turn based gameplay, meaning no dice required for movement. Each player gets three actions, a phone home die roll, and an enemy mover roll. The object is to collect components and have E.T. assemble the three communicator dice to call the mothership to the wooded clearing and get him to the goal before you get caught too many times or the police block your path to the clearing. During the move sequence of the turn, players' three actions are consumed by up to six movements, picking up items, or picking up candy needed to move E.T. In addition, there are an unlimited number of free actions that revolve around moving E.T., dropping items, building devices, or teaming up. Basically you need to travel around the board, avoiding enemies, to locate items and bring them to an area to have E.T. assemble them. Next you need to bring these assembled items to the clearing, like in the film, where the communicators are utilized to call the mothership. 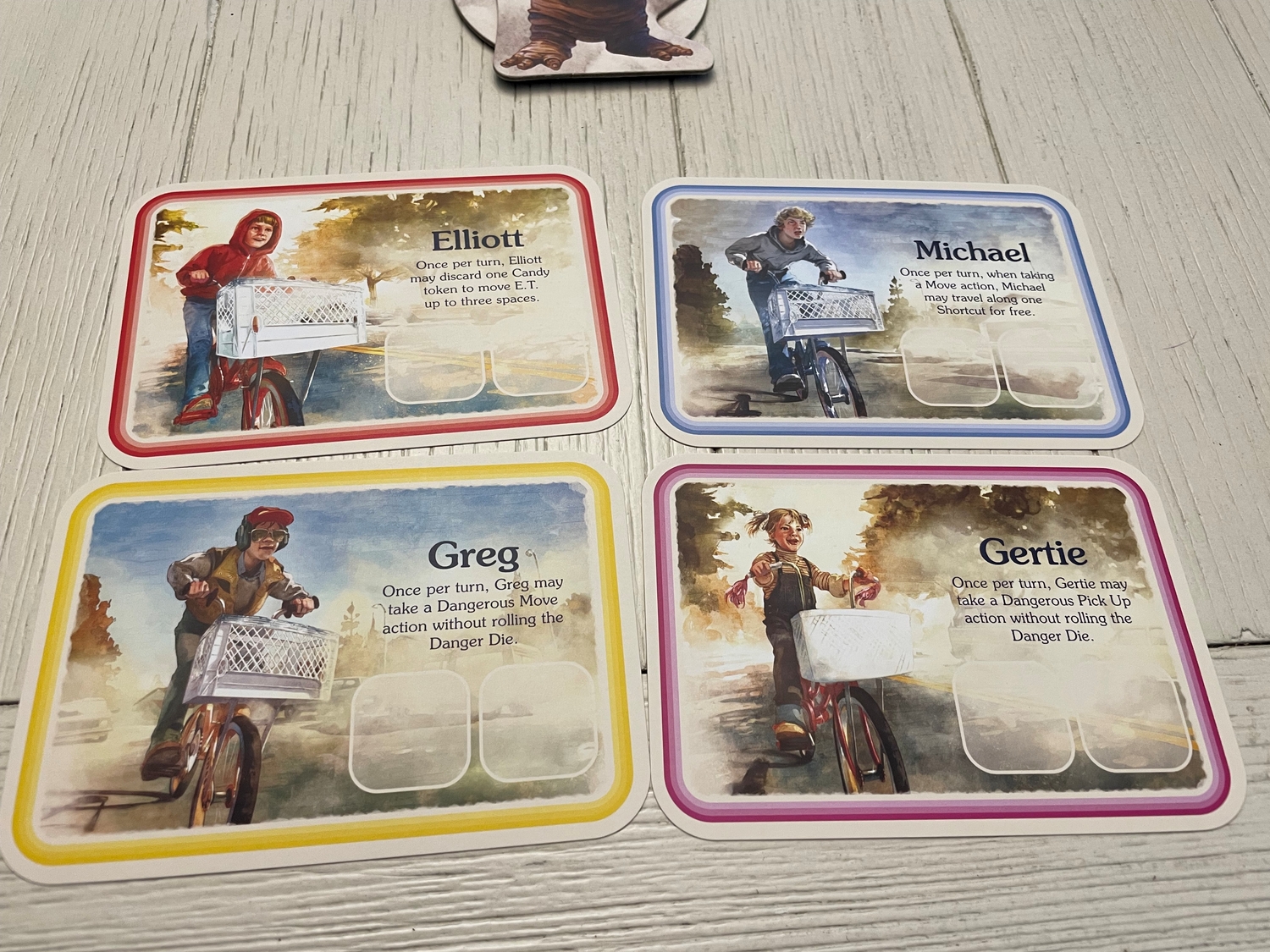 Each character has unique abilities, similar to the characters in the Goonies game, so you can choose based on your preferred play style whether it be taking more risks or looking for greater defensive options. In addition, you can use a free move to pick up E.T., with some risk involved (later), to utilize some extraordinary abilities. These allow you to transport around the board, gain additional items, or avoid enemies. Lastly, you can team up with other players, connecting the game pieces together and allowing both players to move on the same turn and take advantage of each other's player abilities, however again this creates a risk from enemies upon conclusion of the turn. 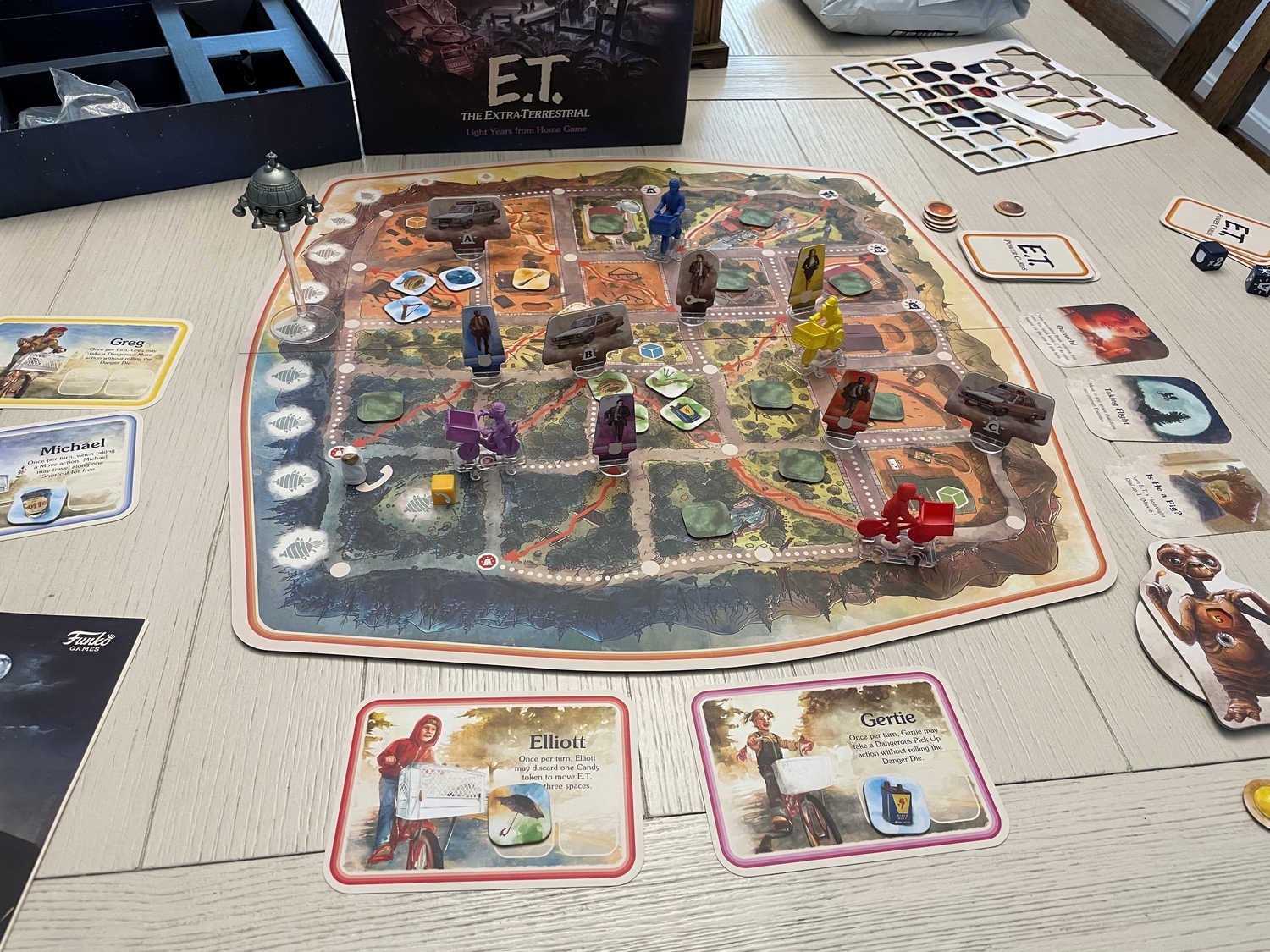 The next portion of a player's turn involves rolling the phone home dice. These are generated from combining items of the same color and transporting the die in your basket to the forest clearing. Early in the game you likely won't have these assembled yet, so you'll likely skip this portion of the turn. Later though for every phone you roll, you move the mothership one space closer to the forest clearing. Obviously, more dice increases your chance to succeed. In addition, there are more items than needed to generate the dice, so you can use each extra colored item to advance the mothership one space when placed in the forest clearing, or use a wild card token to move one space for each die in the clearing. It would be a strategic move to wait until you have all the dice to play one of those. 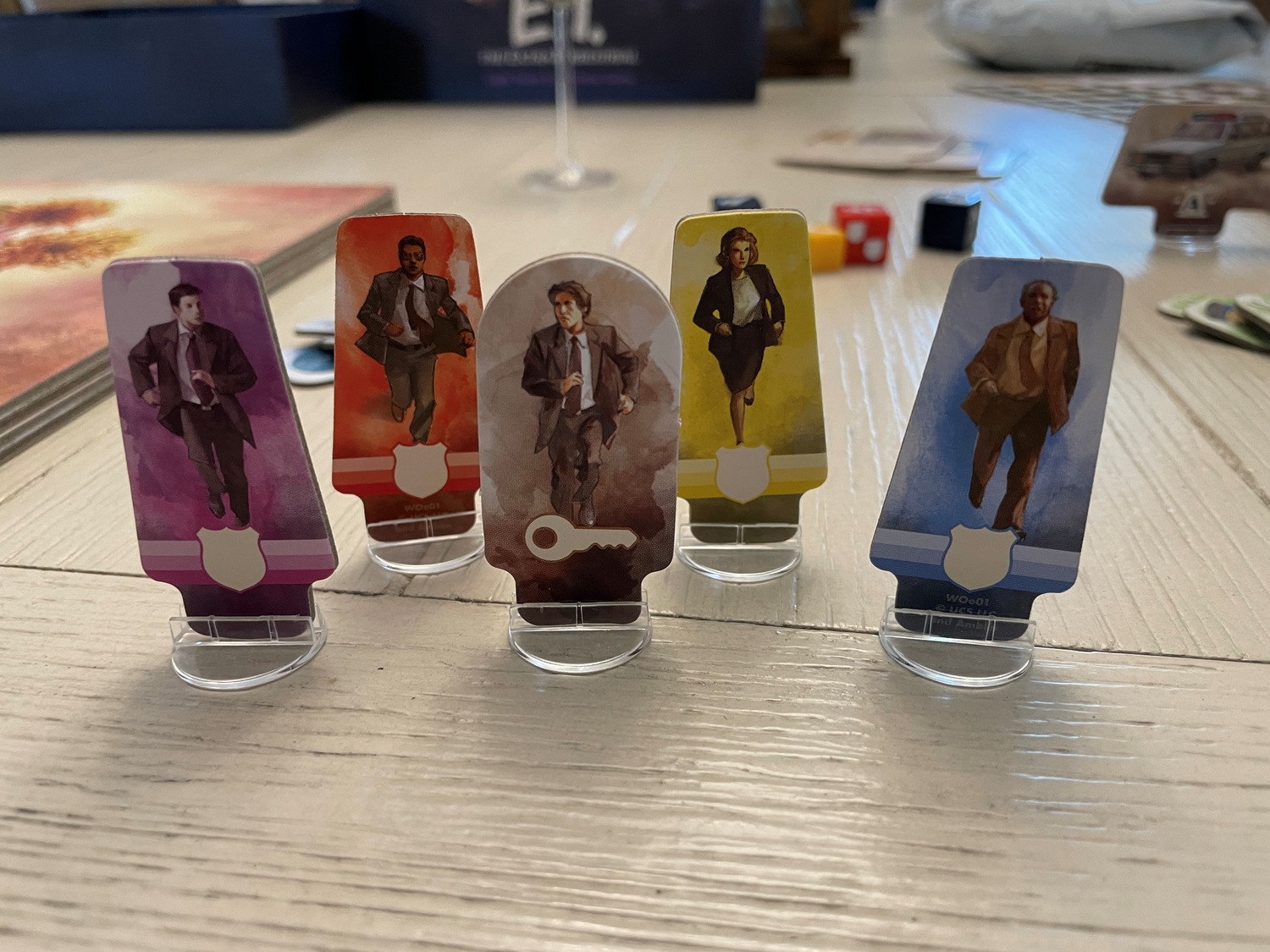 Now on to the antagonists! The enemies get their time in the spotlight as well. There are two dice that players must role at the end of their turn to move both the police cars along their line of play and the agents toward their respective player. However, you can chose the path the agents take, just as long as you move them toward your mover. In addition, if you have E.T. in you space, whether or not he is in the basket, or another player is in your space, you attract attention and must roll a red danger die. In addition to agents and cars, this also moves special Agent Keys, known for the close up of the keys on his hip during his first appearance onscreen. Keys, unlike the other agents, is hunting E.T. You can also trigger the danger die by picking up items with enemies near or moving through enemies during gameplay, requiring immediate resolution by rolling the die, risking capture. If an enemy captures you by landing on your space, E.T. looses one health, you lose all your items dropping them on a nearby space of your choosing, and you return to the start. If this happens enough times, it's game over, so choose your path wisely as you build your devices and carry them to the forest clearing. You must still get E.T. there after the mothership arrives, so make sure the enemies don't cut off your path. 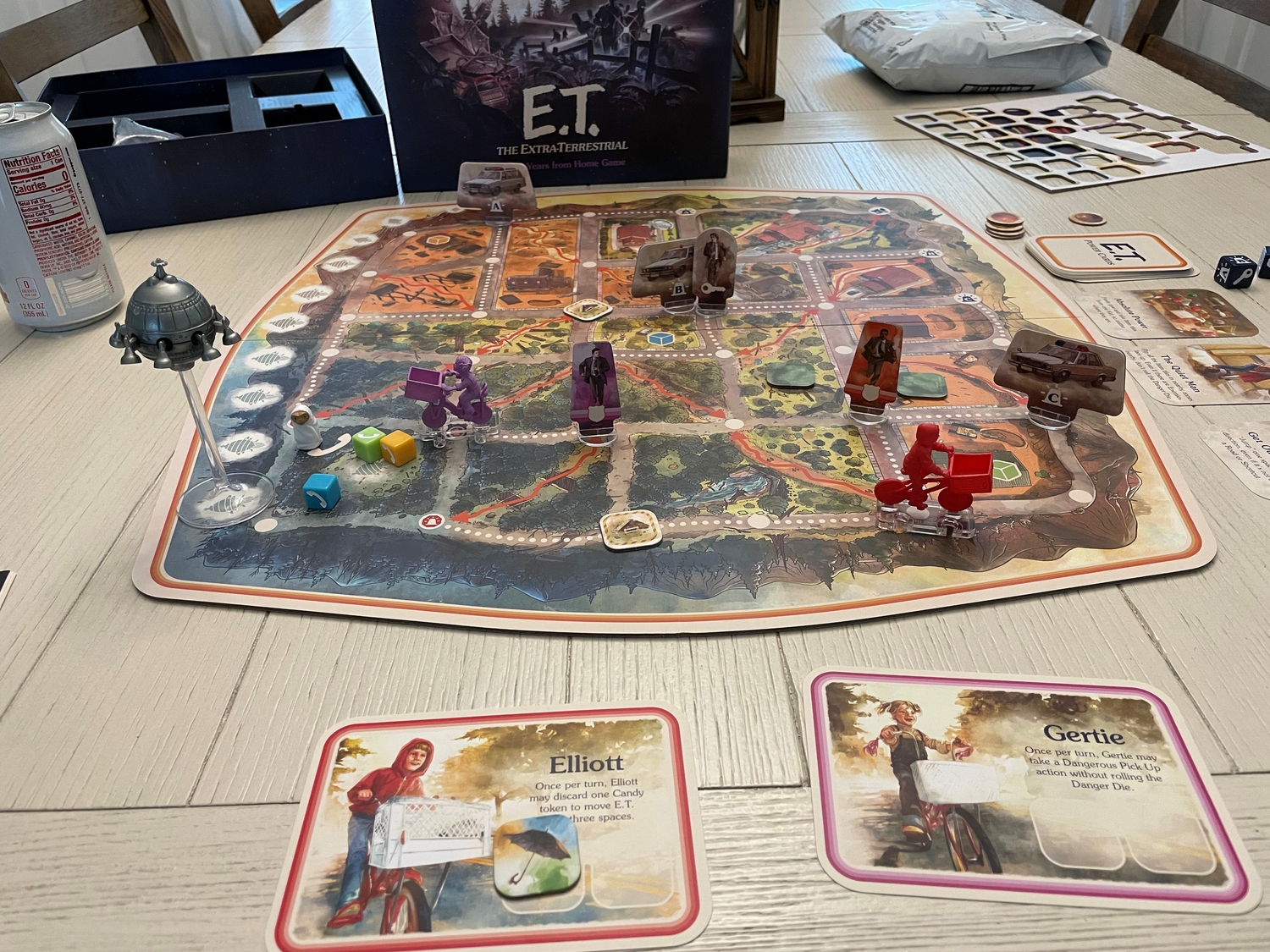 After playing through the game, we realized a cooperative match like this is enjoyed just as well with two players as it is with four. You can definitely have fun in a larger group but if you're an E.T. fan and want it for date night, then it's just as fine. Further, you can up the difficulty with more people, requiring more items to assemble the dice, so despite the extra help the game can still provide a challenge.

Another great example of world building on a game board by Funko Games and Prospero Hall. The experience provides players with a captivating narrative and engaging group challenge that is fun for die hard fans and families. Funko Games and Prospero Hall definitely didn't phone this one in..........owwwwwwwwch! Puns aside, this is an adventure worth taking with friends, family, or that special someone.

Order yours now from Target!