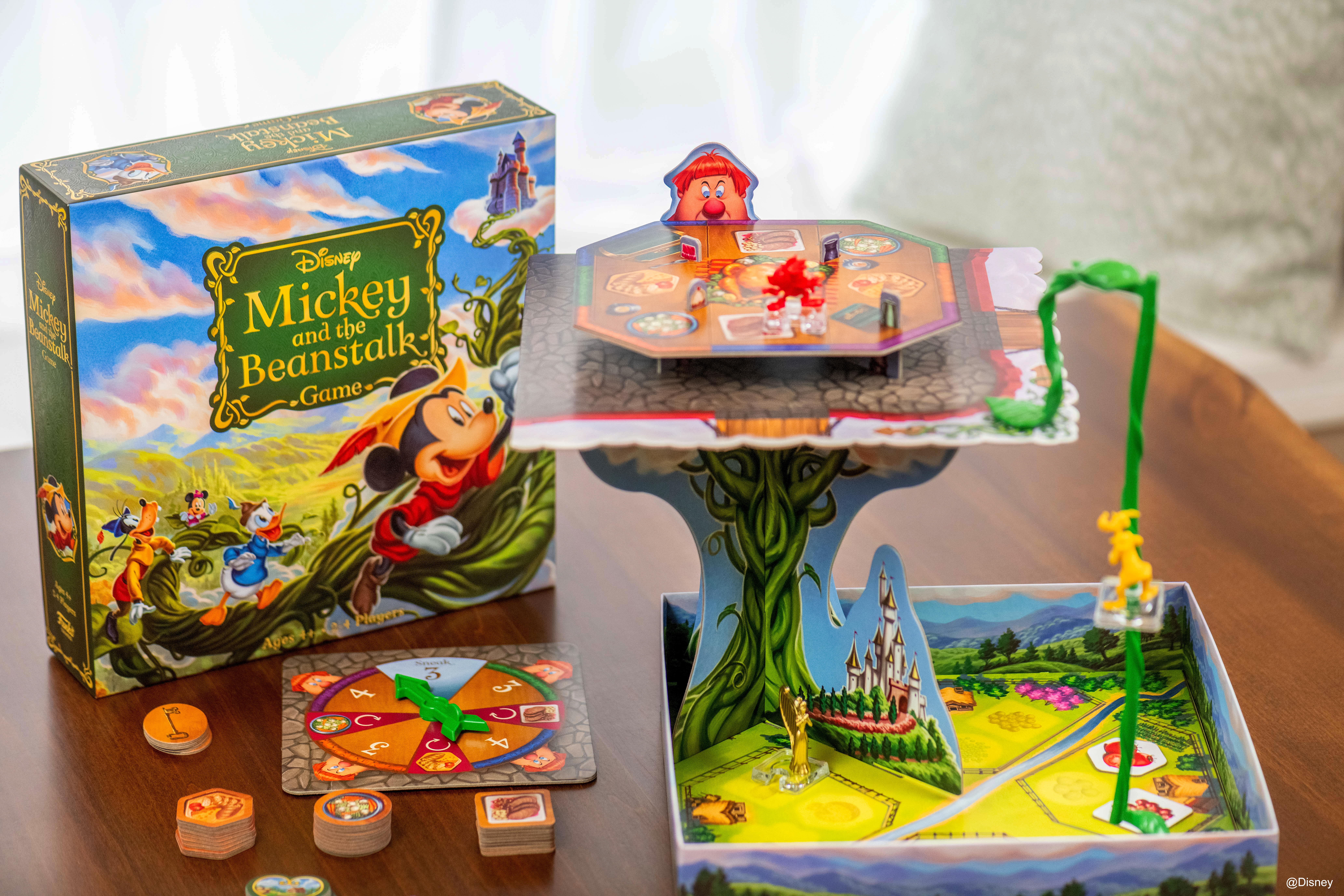 Fun and not free of fancy, we found Funko Games's Mickey and the Beanstalk Game to be quite entertaining for children and adults alike, making a challenging and fun family co-op board game. Based on the 1947 short film, Fun and Fancy Free, the game allows you to play as Mickey and company reliving the adventure of Jack from Jack and the Beanstalk. 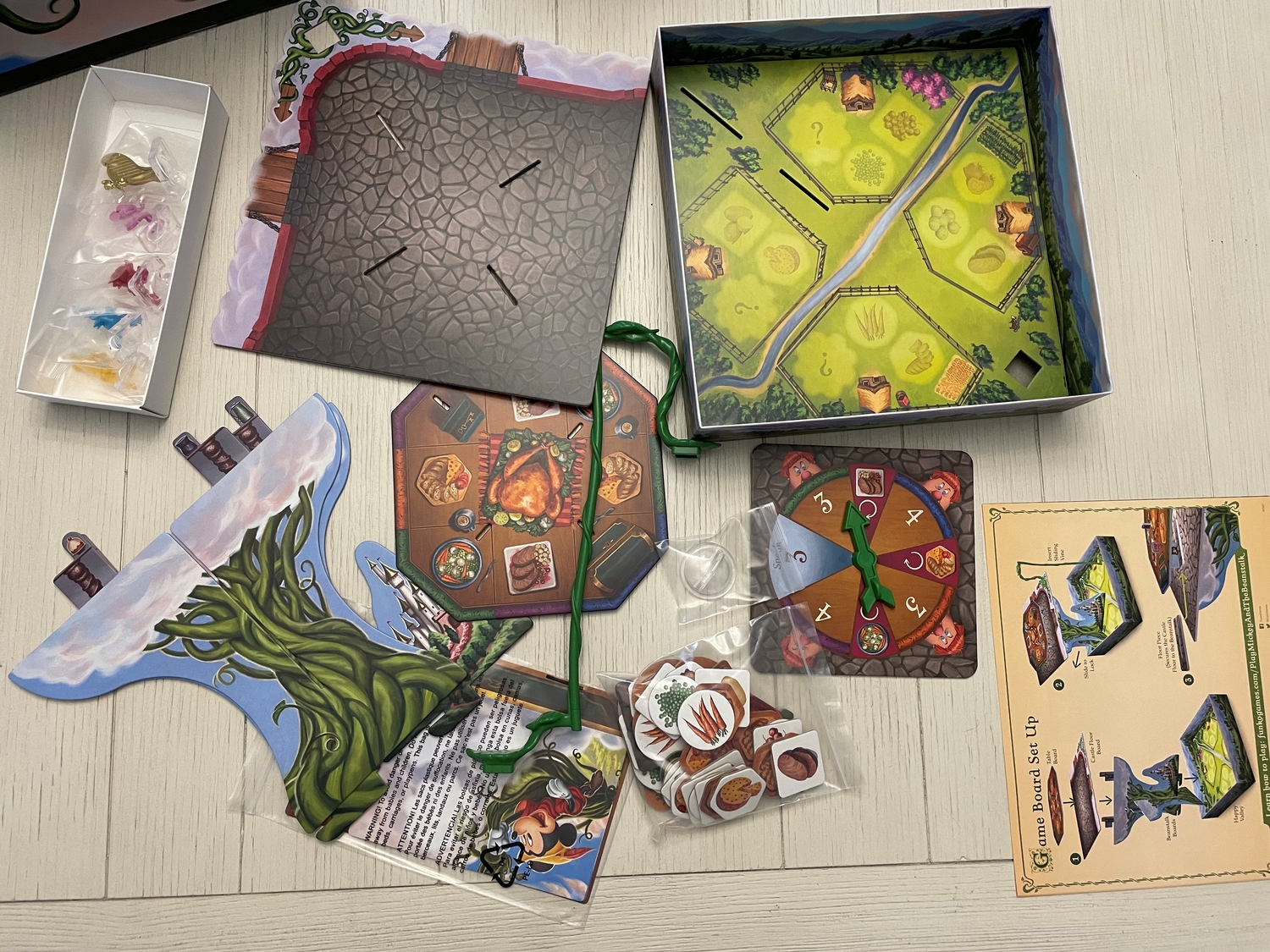 Contents
While it seems like there are a lot of parts here, the game board is only four pieces and the rest are simply movers or tokens. The game makes great use of space here and essentially everything is part of play, including the box itself. The inside flap serves as the opening scene of a story book, while the bottom half is the game board itself. There is a wide assortment of key items and movers for players to choose from and no die here, simply a spinner. As usual, Funko Games is very thoughtful in its inclusion of reusable baggies for all of your game pieces to keep them from getting lost. 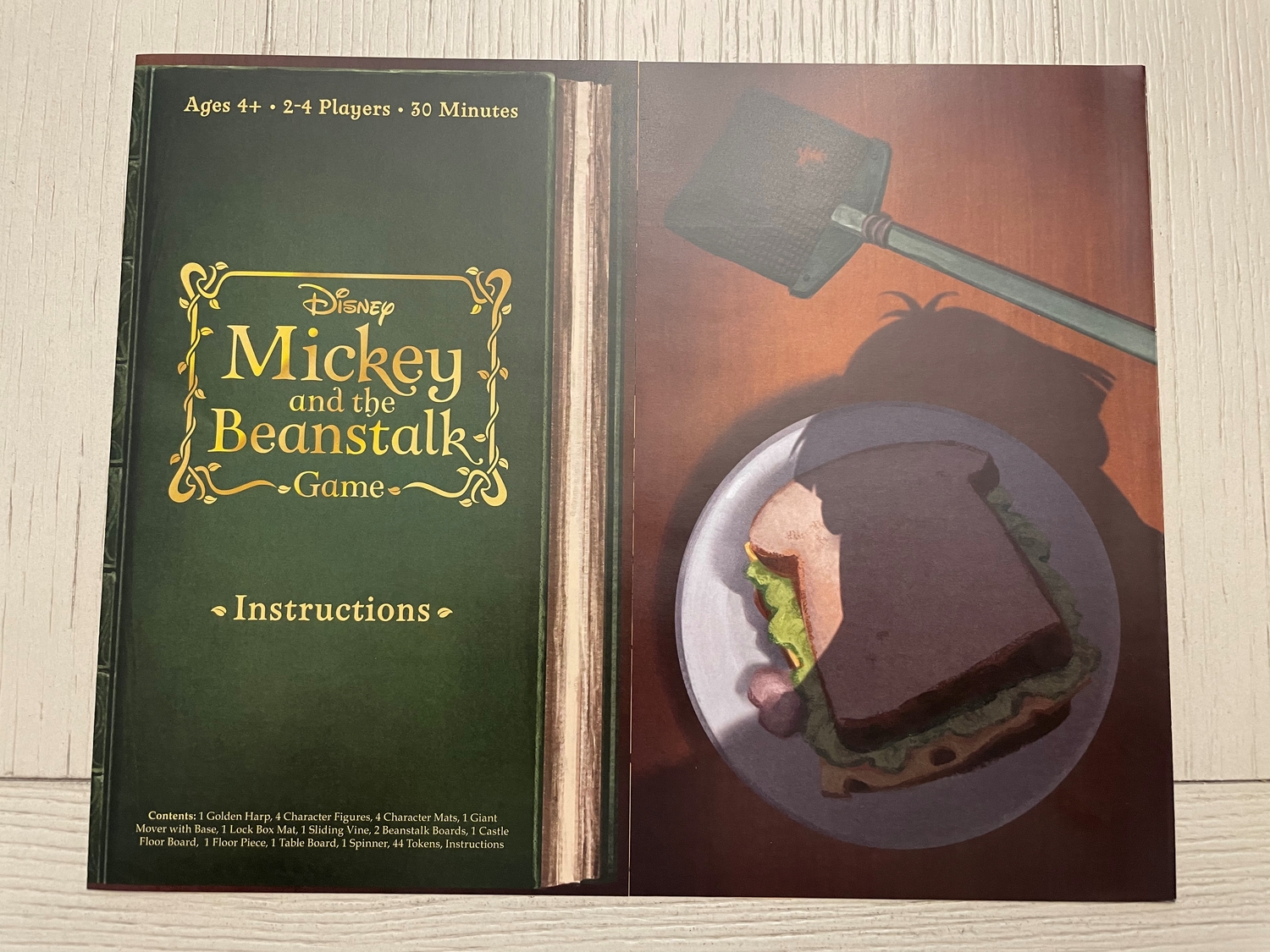 Scenery and Design
As is expected with Funko Games, they excel are building a world within the game and this is no exception. Like hoping into a storybook, Funko Games has built a 3-D immersive field allowing you to hop right into the movie and immerse players on a whole new plain. The artwork is excellent from cover to cover in the same style as the film itself. Even the instruction manual has a storybook feel to it. 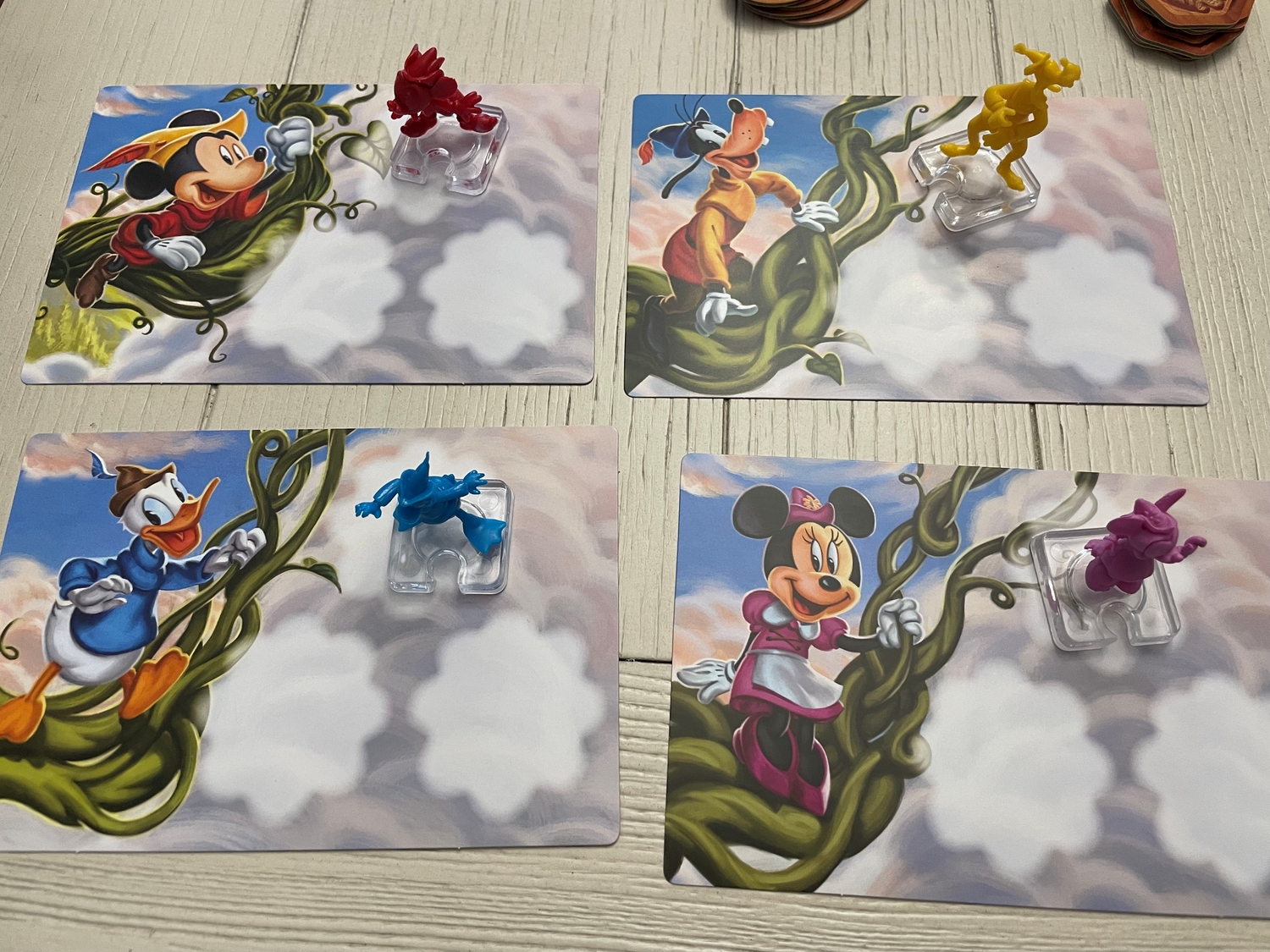 Of note, while Minnie did not appear in the movie, she is included as a playable character to offer four player capability. Funko Games did an excellent job in designing her in a film inspired aesthetic, capturing what she probably would have looked like if she appeared in the film joining Mickey's company on their journey. 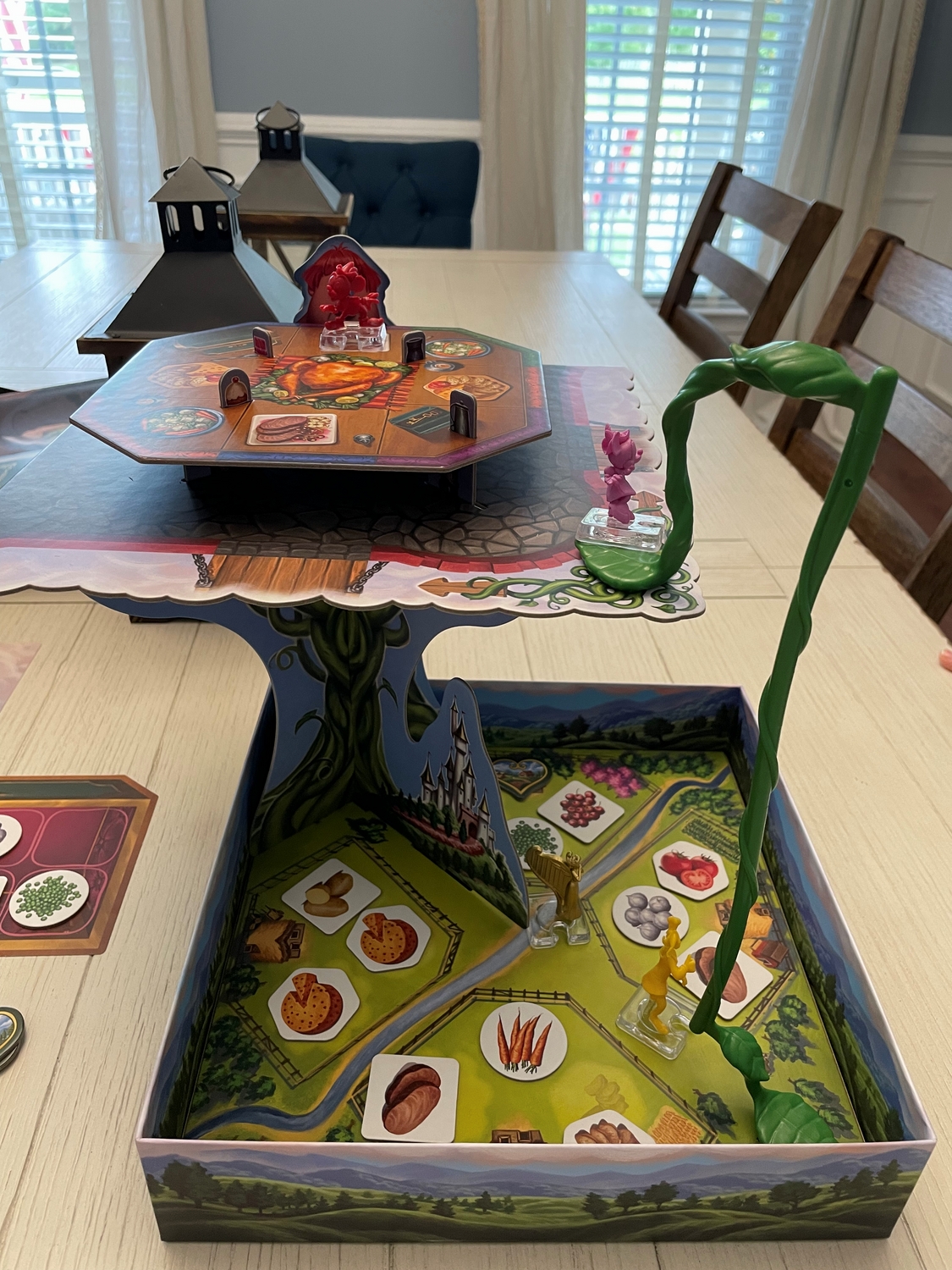 Setup and Gameplay
The setup is straight forward, assembling four piece to build the giant's castle and beanstalk, and one lock pin. Players choose their mover and as with similar titles, the youngest goes first. From there you simply move up the stalk to the giant's table and collect food for the village and the golden harp, which as in the film, requires collecting a key first to unlock the giant's chest.

Now while this sounds simple, it is far from easy, as we found when we lost the first three attempts at play. Players are working together to collect the required food, given at random, and the golden harp, however there are some restrictions. First, players can only carry three items at a time, so you must make literal trips down the beanstalk to drop things off before returning to acquire additional items. Funko Games enabled the movers to spin down the beanstalk on your subsequent trips, a gimmick much appreciated by the kids. While this is going on, the giant can "see" you, which then involves him taking a food item and locking it up in his chest. Additionally, some of the spaces on the spinner can lead to an item automatically sent to the giant's chest. When the giant acquires eight items, the game is over. This happens fairly easily, so you need to way your options while collecting items. 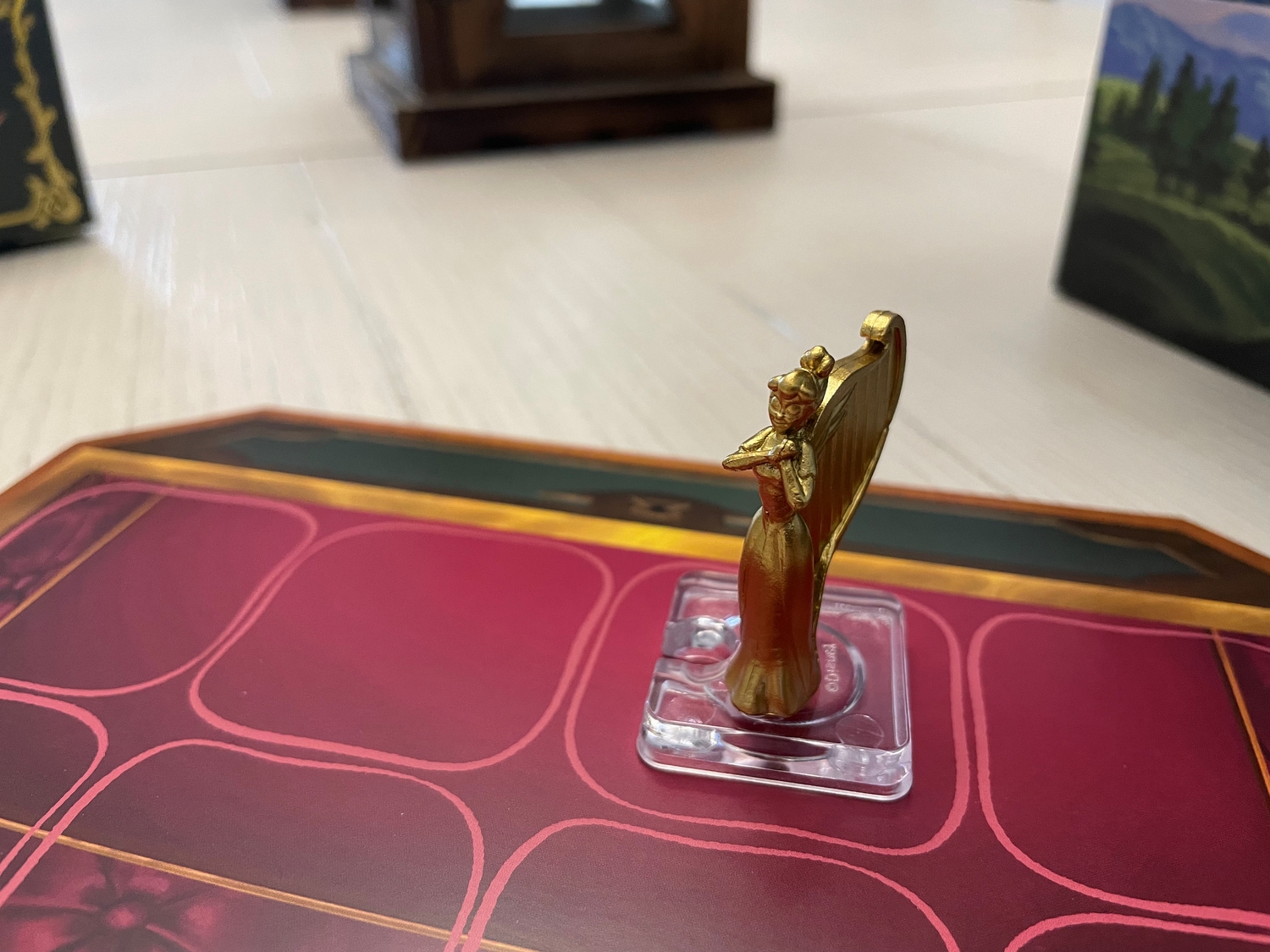 All is not lost, you can reacquire taken items by getting a key and taking an item back from the box, which is extends you chances to continue the game. Additionally, each time you fulfill the required food items for one of the cottages spaces below, you acquire an extra life, which stops the giant from taking one item. Using these tactics can improve your chances of getting the required items to win the game. Once players acquire all the necessary foods and the harp, before the giant gets eight items, the game is over. Again, sometimes this can be tricky as you need certain items, and they are drawn at random, which can be problematic if you can find something, like those darn peas! 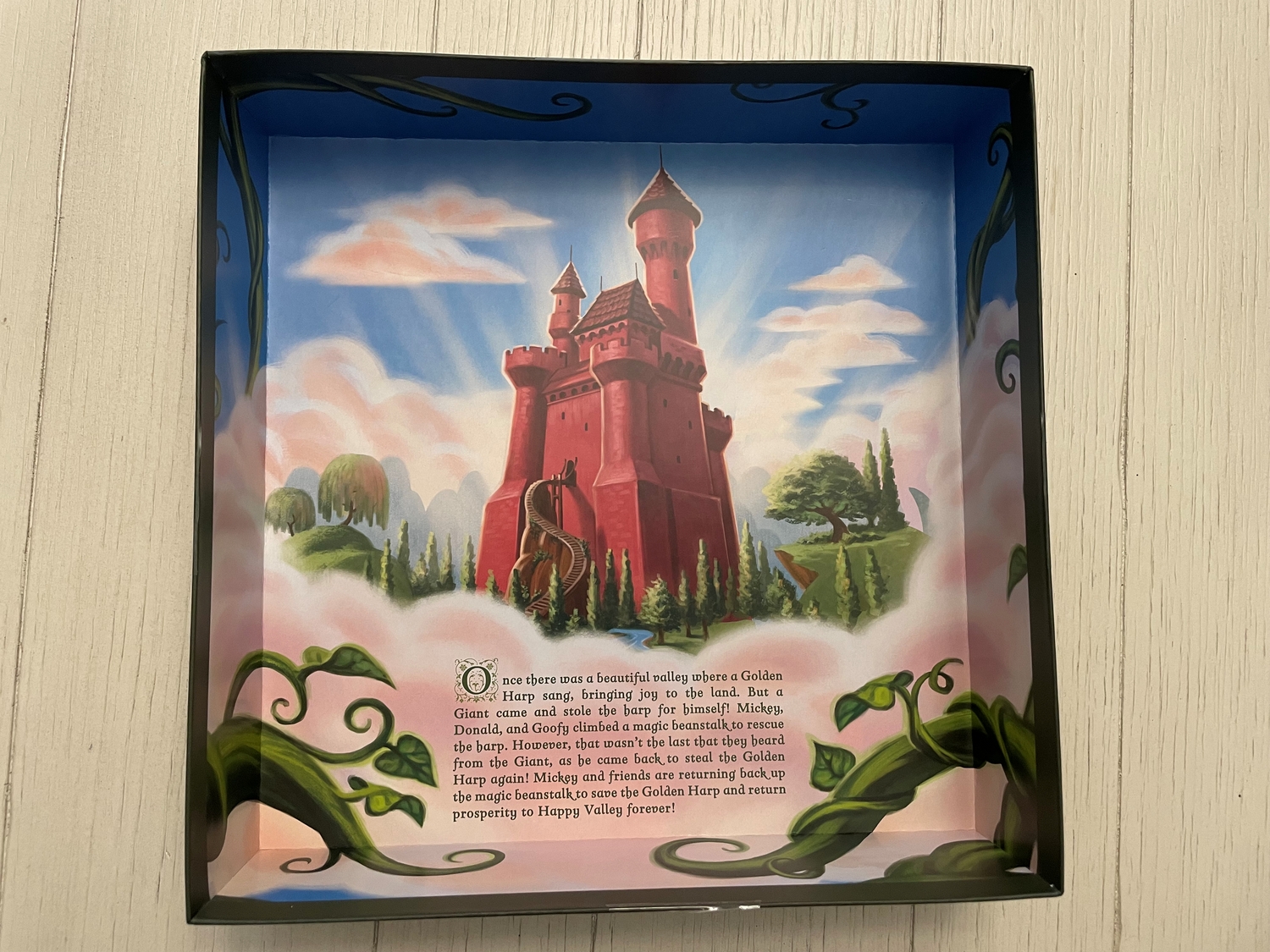 Final Thoughts
This game surprised us in that, while not a challenge to learn to play, it provided a challenge in substance. It is much easier with more players and quite entertaining for the younger kids. We found the six to ten crowd engaged enough to want to play it multiple times. This will make a great addition to any family game night and will entertain both kids and adults providing a Disney experience in the immersive game board.