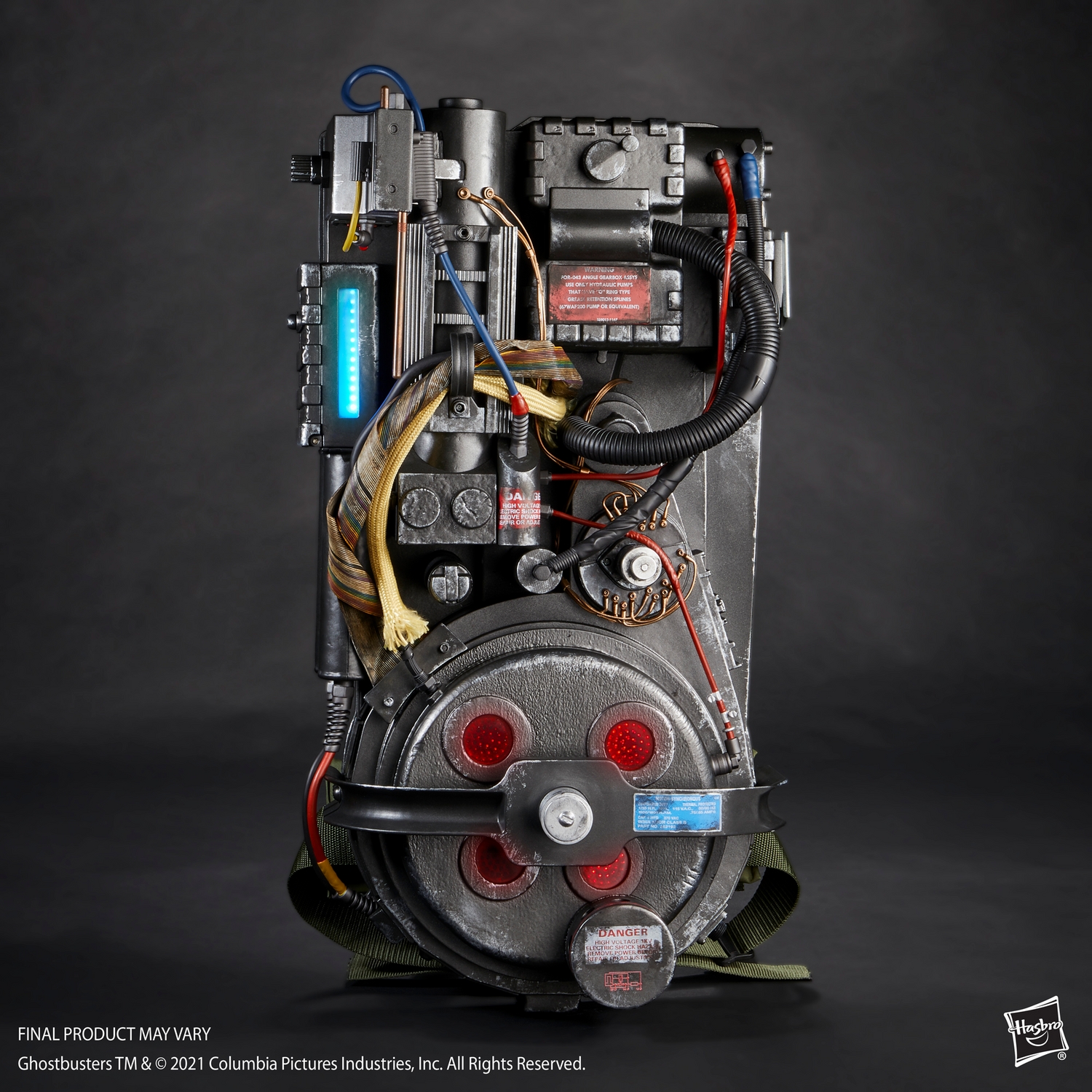 Also, Hasbro Pulse Premium Members that back the project within the first 48-hours will receive a bonus add-on of 4 1984-inspired green ectoplasm goo attachment accessories in addition to the HasLab Ghostbusters Proton Pack item.

Have there been any recent reports of odd occurrences in your neighborhood? No, not the guy a few houses down that likes to mow his lawn at 4 a.m., wearing a bathrobe and a pair of tube socks pulled up to his knees. Thats just your neighbor, who falls more into the category of something weird that dont look good. Although who mows a pattern like that into their lawn? Maybe hes trying to open a portal to the other side, right there in his front yard? Okay, on second thought, you should probably keep a closer eye on him. You may very well need to call in the professionals: the Ghostbusters.

Better yet, you could suit up yourself and take matters into your own hands, and weve got exactly what you need to do it!

Look, we get it, not everyone is lucky enough to have an eccentric, genius grandfather who left us a fully functional albeit unlicensed nuclear accelerator. Most people just get slacks and socks. It was with this understanding that we that we decided to cook up something special. Were professionals here at the Hasbro Pulse HasLab, and we wouldnt waste a second of this amazing fanbases time with anything less than the ultimate ghost bustin adult collectible roleplay item. Introducing the first-ever Ghostbusters HasLab project: the Plasma Series Spenglers Proton Pack! Heat em up, indeed!

If were being honestand it sure smells like itmost of us have been waiting for this moment to arrive since way back in 1984, when we were introduced to our true calling: strapping into a Proton Pack and saving the world from every spirit, spectre, ghoul, and ghost looking to get up to some supernatural shenanigans and haunting hijinks.

As fellow faux scientists (and no doubt a smattering of real ones!), you know the importance of funding paranormal research and how it can help make the world a safer, less scary place. Heres what well need to make this paranormal project a reality (and dont worry, we kept Venkman out of the money decisions):

You are our eerie investors, our phantom financiers, our bloodcurdling backers, and we need your support for our research and to fund this HasLab today!

We love this franchise! Were excited to be a part of it! And we know in our hearts that Ghostbusters fans feel the same. The Ghostbusters fandom is an extraordinary team, suiting up for action and adventure every day since day one. Thats why when we were determining exactly what we should offer in this Ghostbusters HasLab project, we knew it absolutely had to be the Proton Packand not just any old Proton Pack, but Egon Spenglers Proton Pack! Working directly with our partners at Sony Pictures Consumer Products and Ghost Corps, our talented designers were provided with everything theyd need to create a movie-inspired, 1:1 scale Ghostbusters Plasma Series Spenglers Proton Pack.

We are more than just toymakers here. Were fans. Thats why we understood the seriousness of getting this pack just rightdown to the very last nut and boltto offer you something incredible to add to your collection while celebrating the next chapter in the Ghostbusters universe.

THERES SOMETHING YOU DONT SEE EVERY DAY.

Hang onto your flight suits because were about to blow you away. The Ghostbusters: Afterlife Ghostbusters Plasma Series Spenglers Proton Pack is here, and this first-ever, full-scale, mass-manufactured beauty has it all!

 Were making history with this movie-inspired prop replica, scanned directly from the Ghostbusters: Afterlife Proton Pack hero prop! (Yes, with Sony Pictures Consumer Products let us play with the real thing!)
 Out-of-this-world tech features lights, sounds, AND a motor for active roleplay and re-creating iconic scenes!
 Two modes of play include lights and sounds from both the 1984 classic film Ghostbusters and the upcoming 2021 Ghostbusters: Afterlife movie. Did we use supernatural sorcery? Nope, we just included a switch!
 Modular and lightweight, this scientific wonder is the closest you can get to strapping a real nuclear particle accelerator to your back (and much less dangerous).
 Have we mentioned that this Proton Pack is compatible with the Ghostbusters Plasma Series Spenglers Neutrona Wand (sold separately)? Because it is! The Proton Pack features a metal V-hook that connects to the V-hook on the bottom of the Neutrona Wand. Level up your cosplay game by stowing your wand on your pack when youre not actively bustin ghosts!
 Scary good screen-accurate details include the booster, power cell injectors, bumper, shock mount, and more! Oh, and yeah, you can open the cyclotron and explore its inner workings for the very first time. Seriously, if you dont fund this Ghostbusters HasLab project it may be a decision that haunts you forever!

How could it not be the apocalypse when this seems way too good to be true? This isnt any old pack, you see. This is the Proton Pack of your aspirational childhood dreams! Still, that just wasnt enough for us, not for the very first Ghostbusters HasLab project. We couldnt help ourselves. We were compelled to go above and beyond. Hey, no job is too big, right? Thats why weve decided to offer a total of 4 classifications of unlocks.

Whether youre looking to recapture that nostalgic 1984 feel or excited to look ahead and imagine what creepy encounters will come next, this Proton Pack is the one youve been waiting for. An epic addition to your Ghostbusters collection, strap in and let your imagination transport you to a world filled with hungry green ghosts, giant marshmallow men, outdated flattops, monstrous Terror Dogs, metal-munching spectres, an army of mischievous Mini-Pufts, and whatever other supernatural surprises you can conjure up. Well provide the Proton Pack, you provide the play, so lets do our ghost bustin best to trap 7,000 backers today.

Were incredibly excited to see this Ghostbusters HasLab project come to life, so fund now so you can start bustin ghosts!