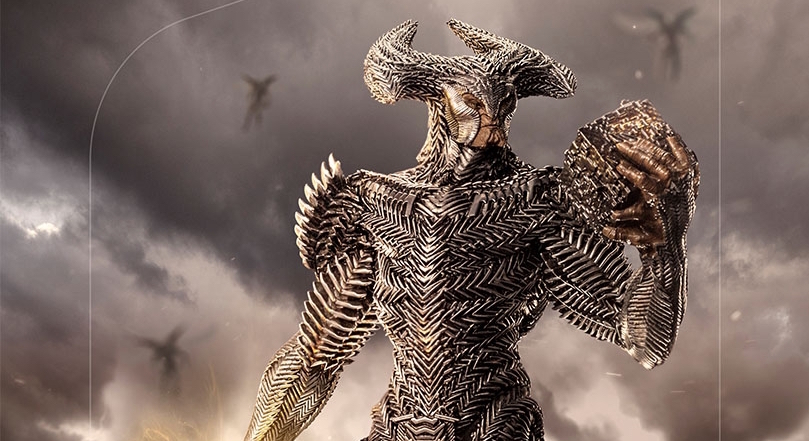 Uncle, and herald, of the tyrant Darkseid, the conquering lord of Apokolips, Steppenwolf, in the past betrayed Darkseid with enemies who wanted to take his throne but later turned against the would-be usurpers, defeating them in hopes of righting his mistake. Even though, due to his betrayal, he was exiled and given the task of conquering 150,000 worlds as a penance. Heeding the call of the Mother Boxes, which awakened after Superman's death, he came to Earth to conquer it, and his attack began on Themyscira, the Paradise Island of the Amazons. Discovering on Earth the presence of the Anti-Life Equation, a transcendental mathematical formula that eradicates free will, he alerted Apokolips' armada, and only the Justice League, with the help of a newly resurrected Superman, were able to stop him.

Depicted by Irish actor Ciarán Hinds, Iron Studios brings a statue with the most aggressive representation of the villain in the movie Justice League, in the acclaimed version of director Zack Snyder. Unveiled at the annual Inside Iron Studios: Second Edition virtual event during CCXP Worlds 2021 in the Worlds to Collect arena, Steppenwolf is another release already available for Pre-Order. The figure is part of the collection inspired by the so-called Snyder Cut, which will have thirteen statues, with "Superman Black Suit", "Darkseid", "Knightmare Batman" and "Wonder Woman" in the Art Scale 1/10 line, and the stylized versions "Superman Black" and "Batman Knightmare" MiniCo, also available in Pre-Order. There is still six future news to be revealed. Check out more on Iron Studios' YouTube channel and social media soon.

- Based on original references the Movie