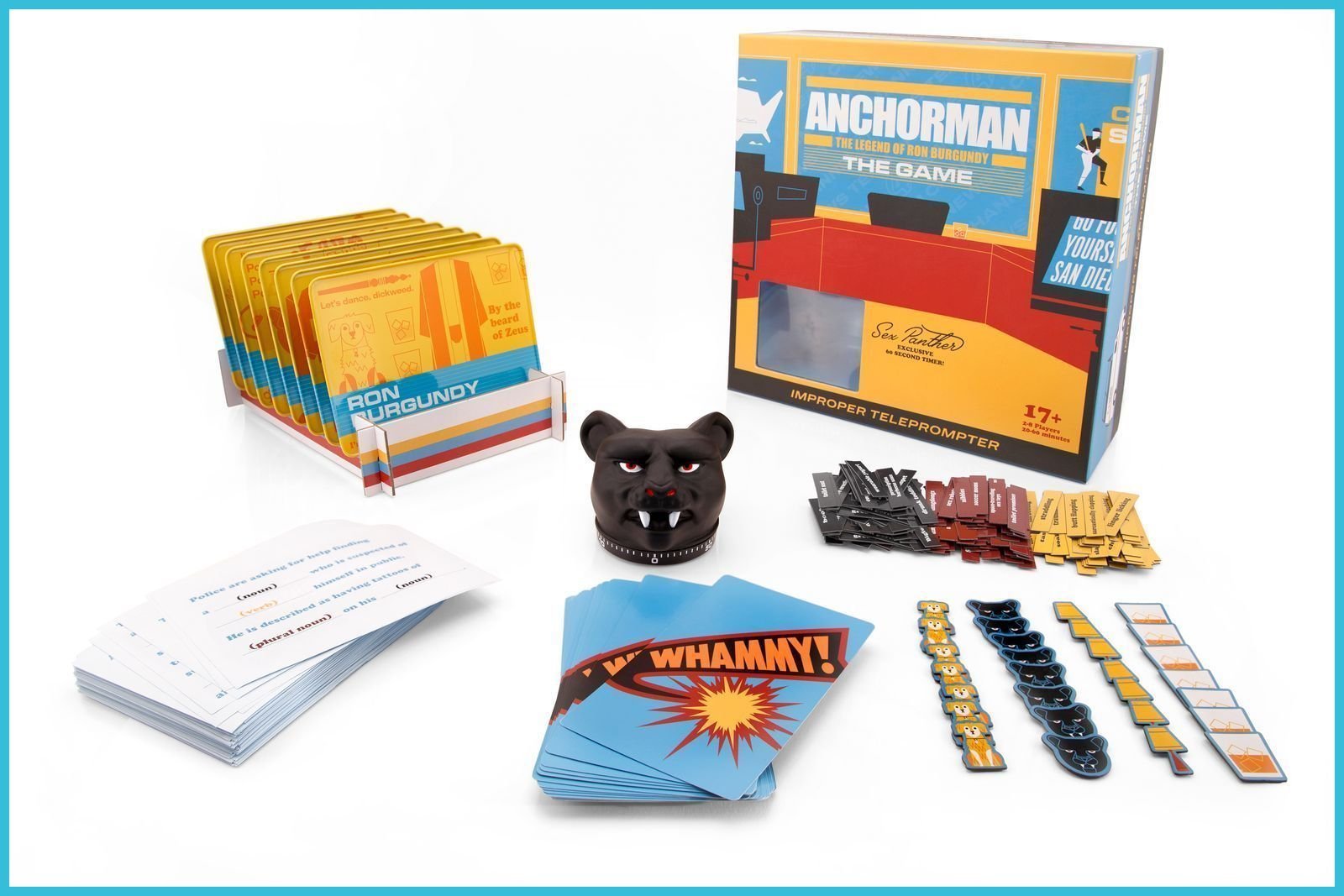 By the beard of Zeus! We had a chance to the review the new Anchorman Board Game, and we have to say, it's kind of a big deal. Check out our thoughts in the full article. Don't worry, you won't have to watch out for tridents! Barry and Jason definitely tried to capture the zaniness of the film and center on the elements of the movie that made it so memorable. You'll notice familiar elements such as the scotch glass, Baxter the dog, and of course the Sex Panther (don't worry unlike the movie this is not made with bits of real panther).

The player tins also capture the unique elements of each of the players. Little touches like Champ's hat, Ron's robe, and Frank's severed arm all bring those moments from the film to the characters and helps make that connection to the film. So many pieces! It took us quite a bit of time to separate all the different words and tokens, definitely recommend setting the game up with a friend. We will say that we appreciate the plastic tray inside which easily holds everything securely negating the need for any plastic baggies. Also everything is organized pretty well, so it's easy to take out again when its time to play.

The simplicity of the parts helps with a quick setup making the ideal party game or playing on a whim. The tokens fall into two categories, icon score tokens and parts of speech word tokens. The player cards are metal trays which hold the teleprompter cards and allow you to manipulate them with magnetic words and hold the scoring icons. The only other piece of equipment is the Sex Panther which serves as a timer. The game is really easy to setup. Each player gets a character tray and 10 words tokens covering adjectives, singular nouns, and plural nouns. Each player then gets a teleprompter card to fill out. There is a teleprompter holder in the center for the anchor to read. There is also a pile of Whammy cards that help create another challenge to the game or give some players an extra edge. The game has notes of Mad Libs and Cards Against Humanity. The basic preface is that after setup, the Sex Panther timer gives players a minute to use their parts of speech tiles to create the funniest or zaniest story possible. Each player story is anonymously put into the center for the anchor to read. The objective is to get the anchor to crack (defined by the players as a smirk, laugh, or stumble while reading the story). This then awards that story with a point. At the end of the round, the anchor decides on the best story and gives that person a point as well. Players take their point tokens and apply them to the graphic side of their player tray. Tiles are exchanged for new ones and gameplay continues until players decide they have reached the final round.

The game adds an extra challenge with the Whammy! cards that bring unique challenges or allow some players an advantage with extra points. Altogether, the game is really easy to learn and play, making it suitable for your next gathering with friends. We see this game as ideal with the current trend of fast paced, easy to learn and setup games and will work in a party setting or at your next game night. It allows for up to eight players, so no one will be left behind. Of note, this is definitely for adults. We opted not to show some of the tiles here because the contain graphic or adult language. Not a problem, just clearly not for kids. This is in keeping with the film though and adds that level of fanfare and authenticity to the game. This is defiantly a great choice for party game lovers and fans of the film. So stay classy and pick up your copy today!

Thank you to Barry and Jason Games and Entertainment for providing us with a sample for this review.