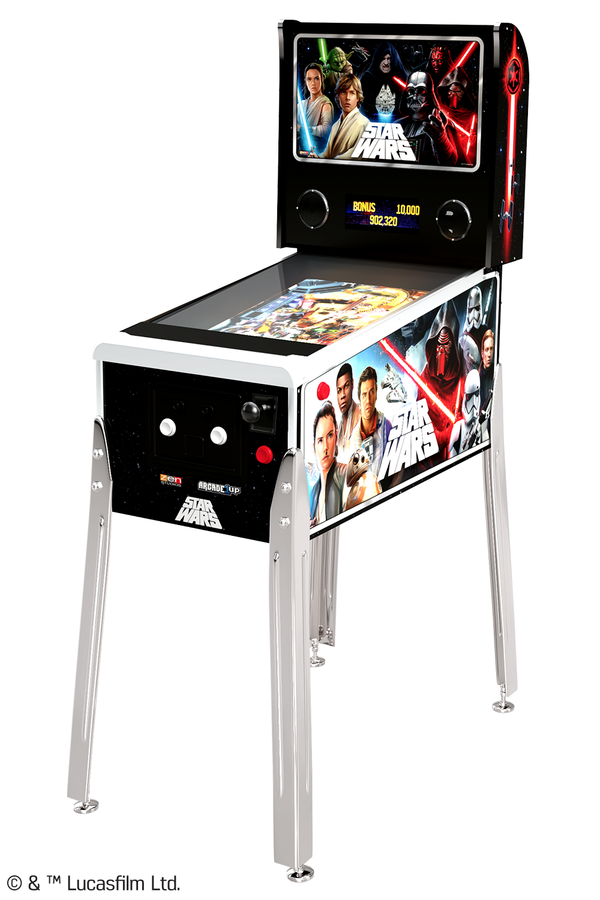 We got our first glimpse of the Star Wars Virtual Pinball at Arcade1up's New York Toy Fair booth last year following its reveal at CES 2020. Alongside the Marvel and Mars Attack's machine, Arcade1Up made its first foray into the 3/4 scale virtual pinball machine market. partnering with Zen Studios, Arcade1Up was able to assemble an impressive array of titles and a nice scaled model for an affordable price.

Learning from the past, Arcade1Up continues to securely package the materials, safeguarding the body from damage will keeping styrofoam from interweaving with the screen via individually wrapped monitors. We had no issues on this unit and everything arrived beautifully from the retailer in this heavy unit. While a person can lift and carry the central part of the unit to its desired location, we strongly recommend assembly be a two person activity. At minimum you want to have a second person help you flip the unit over after assembly to avoid putting all the weight on one side. The artwork looks great on this thing. It pays tribute to the entire saga, featuring OTC characters on one side, sequel characters on the other, and a mixture of characters on the marquee, which lights up by the way. The chrome trim really makes the unit pop as well. There is also a little non-functional coin return on the front, creating a little more depth to the unit.

We are not fans of the exposed screws but it is an easy enough fix. A little bit of mounting putty and basic black screw caps were all we needed to create the smooth look you see in the gallery. You can acquire the screw caps from Home Depot or any other hardware store. The other issue we had was with the plexiglass. On the upright cabinets it is not much of an issue but with pinball, you are more likely to rest objects on the glass or people are likely to touch it. The issue with that is plexiglass scratches pretty easily. This can easily be remedied as well as you can switch out the glass. You can get a custom cut piece of glass at no addition cost at a home improvement retailer like Lowes for about $10 or you can get a custom made piece of tempered glass for around $50 delivered to your door. The tempered glass is much more durable and will not shatter if broken, so if you have kids or a heavy hand, this is the way to go. The control deck captures the spirit of the unit with the flippers and the realistic-feel plunger. The controls are responsive without lag and the haptic feedback occurs in both the front and rear of the unit. We did find that altering the sensors on the front of the unit can provide a better feel to the flippers by simply relocating them under the spacer at the front, which is under where your hands are resting during gameplay vice where they come located in the factory setting. There are videos on youtube with how to do this if you desire, but we found it makes a large difference and is an easy fix.

The sound is more than sufficient and can be quite loud in an enclosed space such as a game room. Fortunately you can adjust the volume with multiple settings by sliding the control left or right.

There are multiple settings on this unit allowing you to adjust everything from the volume of various components, to ball trails, solenoids, and much much more. There is even a way to change the language if you so desire. This settings menu can be accessed in the root menu or within each of the pinball game selections. We found the gameplay incredibly smooth with no lag on the ball or the flippers. Everything lined up perfectly. The unit features a great selection of games including A New Hope, The Empire Strikes Back, Ach-To Island, Battle of Mimban, Darth Vader, Boba Fett, Han Solo, The Force Awakens, Rebels, and Master of the Force. Each with their own unique play field and interactive board. The LCD score screen adds to the dynamic, displaying your scores and some animations as they would appear on a classic pinball game.

We absolutely loved all the games. We tried the full size version of this at Celebration Chicago a few years ago and found it very similar in mechanics. We love how characters appear to interact with your gameplay or how the playfield can change to reflect where you are in the story for that game. You will definitely find some great movie or show moments, along with iconic dialogue, ships, and characters making appearances. Although you can just push a button, we only used the plunger to give the gameplay that sense of realness, and it was a beautiful touch to include it in the design, as it really adds to the playability.

The playfield is on a 720p monitor and is generally crisp but you can get some blockiness occasionally. We wish it would have been on a 1080p monitor to provide greater detail and it would have permitted a larger playfield or made it easier for anyone to upgrade. You could swap in a larger monitor by connecting the existing board, however, it would appear much blockier on a larger size and require a PC to run the software in a higher resolution. While it would be great if future units played on a higher resolution and monitor size, we were content with the factory defaults, which still make this a really enjoyable unit. For Star Wars fans and pinball enthusiasts, this unit is a no brainer. Gorgeous, fun, and loads of games queued up, there is a lot of value here. It is also really easy to assemble and move around. The downside being that, while originally $549, the shortage of semiconductors global has nearly doubled the price to $849 or higher at retailers. It is unclear if the price will come back down or if this is just what it will cost now. The best deal can be found a Target, where you can save five percent if you have a RedCard.


If you want to get a piece of custom glass the dimensions are as follows (as well as options for tempered glass):

We purchased our tempered glass from a site called One Day Glass. Shipping was free and it took about a week to arrive. We used the above dimensions and it was perfect. Recommend a strip on electrical tape or black duck tape for the bottom 5/8" of the glass to cover up an unsightly component visually. This is about the same as the black strip on the bottom of the stock plexiglass.