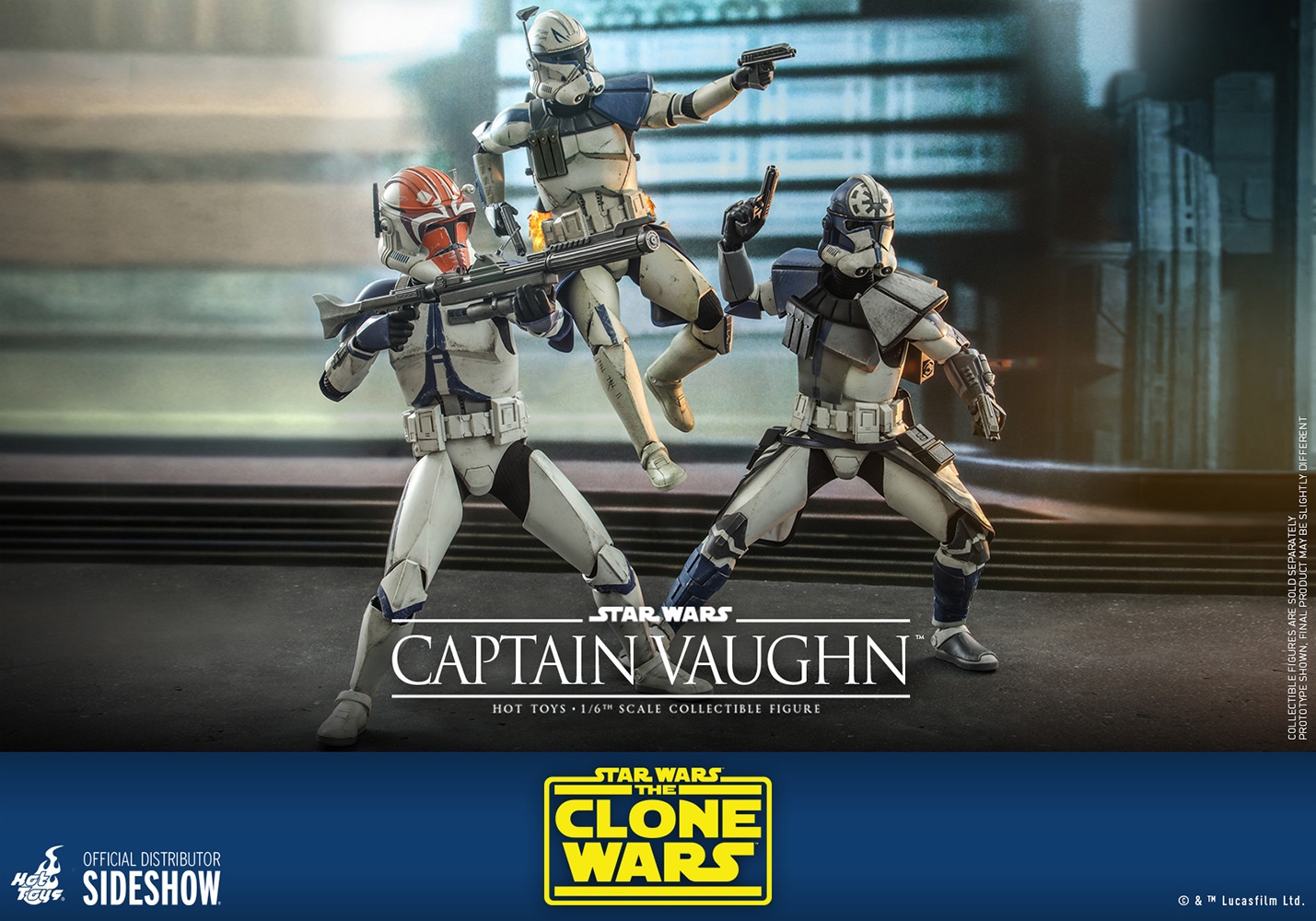 Serving in the 332nd Company in the Siege of Mandalore, Captain Vaughn fought alongside Ahsoka Tano in the battle to free the Mandalorian people from Maul. During the siege, Vaughn bravely pursued Mandalorian Super Commandos into the tunnels of the city, unaware that he was headed into a trap...

1/6 scale body with over 30 points of articulation
Authentic and ultra-detailed likeness of Captain Vaughn in Star Wars: The Clone Wars
Newly crafted helmet with fine detail and weathering effects
Captain Vaughn's armor with distinctive blue details and weathering effects
7 interchangeable gloved hands for a variety of posing and display options
One utility belt
One black undersuit
One pair of weathered boots
One blaster rifle
One blaster pistol
One jetpack (with magnetic function)
One hologram figure of Captain Rex
One holoprojector
A dynamic figure display stand with Star Wars logo and character nameplate

The Clone Troopers of the 501st Legion are a tight-knit bunch, loyal to their Jedi General, Anakin Skywalker. Jesse is a hard-fighting trooper who proudly wears the cog-shaped symbol of the Galactic Republic on his helmet, and has a large tattoo that covers his face. After the execution of Order 66, however, Jesse and the rest of the clones are blindly loyal to the Emperor, and not even his brother, the clone known as Rex, can compete with the chip's programming...

1/6 scale body with over 30 points of articulation
Authentic and detailed hand-painted likeness of Clone Trooper Jesse in Star Wars: The Clone Wars with highly accurate facial expression, detailed skin texture, and tattoos
One weathered helmet with macrobinoculars
Finely crafted and weathered armor
7 interchangeable gloved hands for a variety of posing and display options
One pair of pauldrons with black chest pouch (magnetically attachable)
One utility belt with command skirts and pistol holsters
One black undersuit
One pair of weathered boots
One blaster rifle
Two blaster pistols
One military backpack (equipped with magnetic function)
One hologram figure of Darth Sidious
One hologram figure of LAAT vehicle
One holoprojector
A figure display stand with Star Wars logo and character nameplate