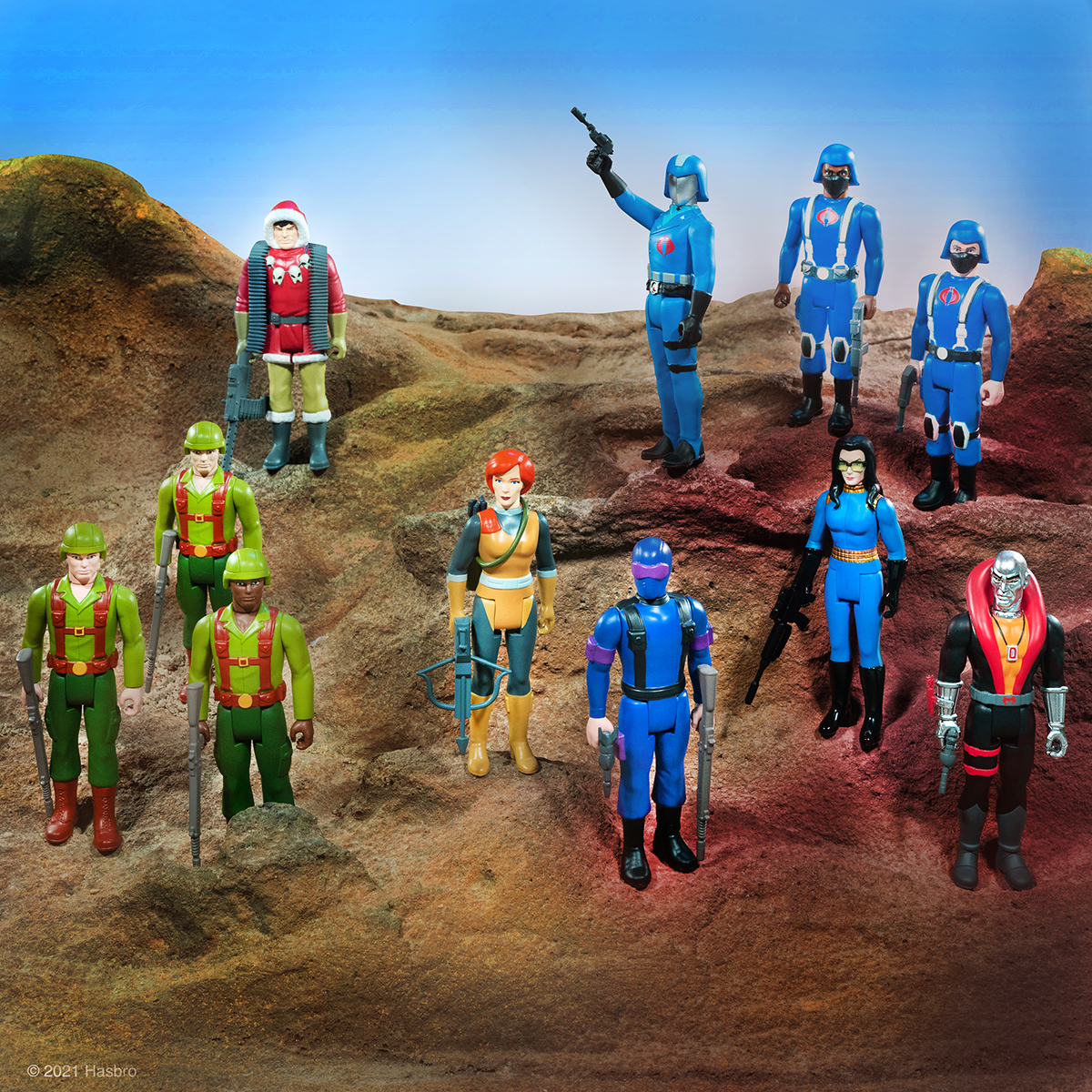 We probably dont have to convince you that Snake Eyes is the coolest character in the G.I. Joe universe. This 3.75 articulated G.I. Joe ReAction figure of Snake Eyes is everything you remember him to be including pistol, cannister, and laser rifle accessories. Theres really zero rational reason you wouldnt want the Snake Eyes ReAction figure. In fact, maybe you should buy more than one so you have extras to give to any friends, as a sure-fire way to get their G.I. Joe collections pointed in the right direction.

The head of Cobras intelligence operations, Baroness is a formidable, if underappreciated, member of Cobras leadership team. This 3.75 articulated G.I. Joe ReAction figure of Baroness comes with laser rifle accessory and reminds us that Cobra is foolish for taking her talents for granted. We know that youre too smart to make the same mistake and will grant the Baroness ReAction figure the prominent place in your collection that she deserves.

Arguably the brains behind the best Cobra plots and doomsday devices, Destro and his plans are often inadvertently thwarted by Cobra Commanders meddling ways and delusions of grandeur. This 3.75 G.I. Joe ReAction figure of Destro features his iconic metallic face and comes with pistol and wrist rocket accessories. Just as his evil machinations are thwarted before reaching their full potential, your collection would be lacking without including the Destro ReAction figure!

Second only to maybe Snake-Eyes in hand-to-hand combat skills, Scarlett is one of G.I. Joes most effective soldiers on the battlefield or behind enemy lines. This 3.75 articulated G.I. Joe ReAction figure of Scarlett is ready to take on the best Cobra has to offer and features crossbow and quiver accessories. Its assumed that her name is derived from the color of her hair, but it could just as easily be from the red-faced embarrassment her opponents have when she bests them time and time again. The cause of freedom needs many defenders, and the Scarlett ReAction figure of Scarlett is a prime example of one of the best!

While not their inherent enemy, as a mercenary for hire, Kwinn is often a thorn in the side of G.I. Joe. Although sworn to uphold the letter of his contracts, his strict sense of honor has saved the Joes on more than one occasion. This 3.75 articulated G.I. Joe ReAction figure of Kwinn is an imposing figure featuring his weasel skull necklace and comes with gun and bandolier accessories. One of the physically strongest characters in the G.I. Joe universe, your collection will undoubtedly be weaker if you dont add the Kwinn ReAction figure!

You cant have an army of just flashy heroes; you need some everyday grunts to fill out the ranks. A lot of them! These 3.75 articulated G.I. Joe ReAction Greenshirt figures are just what the General ordered. Available in pink, tan, and brown, they feature standard-issue Army Green fatigues and come with a laser rifle accessory. Whether you have them guarding an installation, storming a Cobra stronghold, or just doing the grunt-work, the Greenshirts ReAction figures will be the glue that holds your G.I. Joe collection together.

You may think that all Cobra Troopers are the same, but youd be woefully misinformed! Among the legions of Cobras mercenary minions, a bitter feud simmers between the H-Back troopers and the Y-Back troopers. Whats the reason for this deep-seated antagonism? We do NOT have enough room to go into it here, but it is serious business. These 3.75 articulated G.I. Joe ReAction figures of Cobra Troopers come in both H-Back and Y-Back variants in pink, tan, and brown, along with laser rifle accessories. So fill out your ranks of G.I. Joe baddies with a few Cobra Trooper ReAction figures, just dont be surprised if they dont all get along.