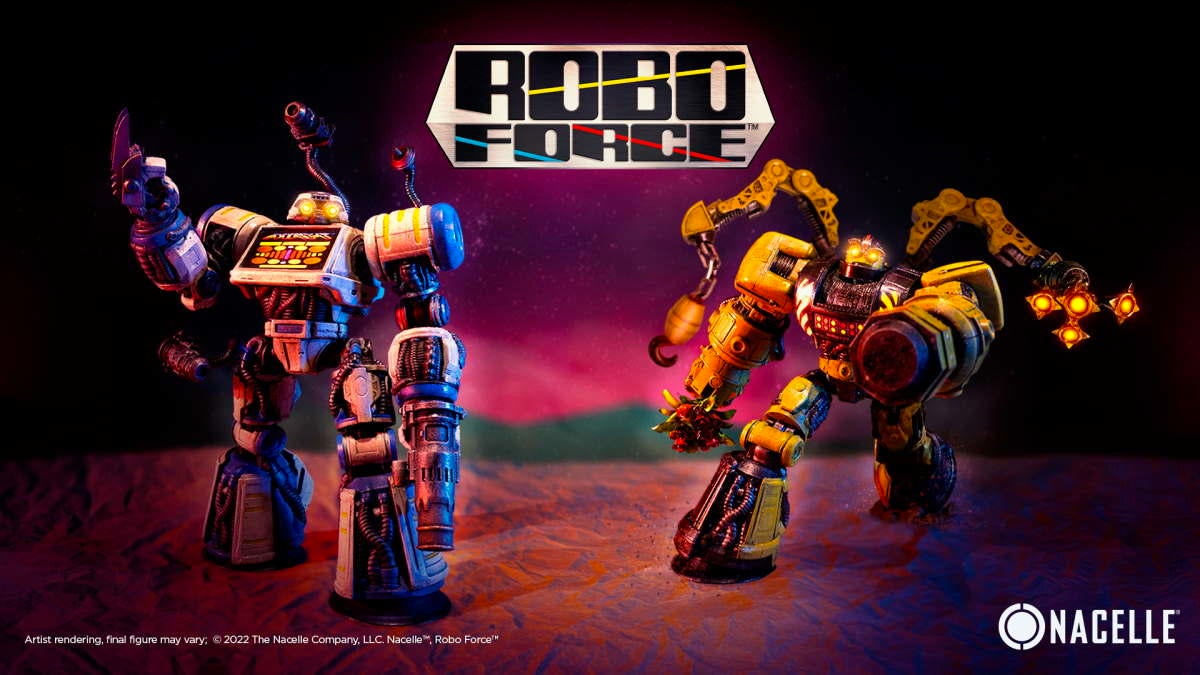 It's been a while since we last spoke with Brian. Our last interview occurred on the eve of the launch of The Toys That Made Us Season 1. Obviously a lot has happened since then including the launch of his company's first toy line, bringing back Robo Force. For those of you not familiar with the line of little robots with wacky poses and other gimmicks, they were quickly overshadowed by another, more popular line of transforming robots that year.

CoolToyReview: Why did you chose Robo Force for your first you line and why is now the time to launch it?

Brian Volk-Weiss: Robo Force was actually our second copyright following the Garloo. First off, I'm more of a robot guy. We also wanted to create its own world. Garloo already had its own story and we wanted something to build upon.

Second, its my love of Robo Force. I have the toys, the bed sheets, I have the phone, I even have a set of party napkins I never opened.

CTR: Given the wide range of scales out there right now whether it is six inch for Hasbro Marvel Legends, or seven inch for Super7 Ultimates!, why go with seven and a half inches for the new Robo Force line?

Brain: We took a look at what was out there and we wanted them to stand out. The larger scale just makes them more badass. We looked into a ten inch scale but it was too cost prohibitive.

Brian: Absolutely. We are interested in a vintage line and we are working on it.

CTR: As we learned from the Toys That Made Us, successful lines have had media tie-ins in the form of comic books, tv shows, and movies. The announcement of Robo Force mentioned some of these tie-ins, where are you in the process for the television show?

Brian: We are still working out where these things will land. We wanted to have a unique story for these characters and the story mirrors why happened in real life. Robo Force was introduced on a Tuesday and Transformers were announced on a Thursday resulting in ToysRUs cutting a significant portion of their Robo Force orders. Much in the vein that we have these robots that have become obsolete in their own world almost immediately upon their first date of entering service.

CTR: So what's next for Robo Force and the other lines Nacelle has acquired?

Brian: Expect to hear more this year as we planned for two waves of Robo Force in 2022. The second wave will open for order around 15 October and release Spring 2023. We'll be showing off the first wave of Robo Force at Robot Toy Fest this weekend.

CTR: What about retailers for the lines? Are you expanding sales beyond your website?

Brian: We'll be announcing plans this week to sell Robo Force through BigBadToyStore and Entertainment Earth and we are working with the big box stores as well but nothing is set at this point.

CTR: What about vehicles for Robo Force?

Brian: Vehicles are not in production at this time but the are absolutely planned.

CTR: Crowdfunding has become so prevalent now with companies like Hasbro with Haslab and NECA with their preorder model. Is this something Very Important Toy would do to bring fans larger pieces like playsets?

Brian: Absolutely. Crowdfunding is great. You get things like the barge, which just shouldn't exist. But it does and it's awesome.

CTR: Are more collaborations in the works in addition to the one you have with Super7 on Garloo?

Brian: We have something in the works with Funko but we can't give more details at the moment.

CTR: We love the apparel featuring the vintage Robo Force figure on it. Will there be more?

Brian: Thank you, we love it to and of course there will be more.

CTR: Brain thank you for you time, can we expect to see Very Important Toys at some of the bigger conventions this year?

Brian: Yes, we'll be at SDCC, NYCC, and others. We look forward to you stopping by the booth.


You can preorder your Robo Force figures now from Entertainment Earth and look for wave two to go up for preorder this fall.